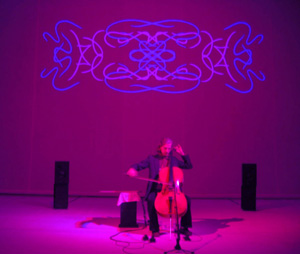 Possessed of a microtonal pitch acuity with which he mirrors sine waves, and in command of an exquisite technique that earned him first soloist chair in Hamburg’s North German Radio Orchestra, cellist Charles Curtis bridges the out and in sides of classical music. Waking States, his contemporary cello series in early December, put those virtuosic extremes—devotion to sound’s naked nuances, and mastery of an immensely sonorous instrument—on telling display.

Most overtly in its soaring, fantastically detailed passages, “Just Charles” channels Young’s commitment to raga, from the vital alap exposition to the unsurpassed eloquence of late master vocalist Pandit Pran Nath, Young and Zazeela’s guru for twenty-five years. It’s also a striking compendium of the composer’s career concerns: his dedication to extreme duration and minute pitch relations evident from his late 1950’s string compositions to his magnificent, sustained Dream House installations; “The Well-Tuned Piano’s” epic thematic scope; and breathtaking fluency, from Young’s sopranino saxophone improvisations to Kirana-style vocals learned from Pran Nath. After one performance of “Just Charles,” the composer declared that Indian classical musicians don’t ask how someone performs, they ask how much he practices. Whether it addresses that question or not, time became moot in Curtis’s superb playing.

Eliane Radigue’s “Naldjorlak” proved a subtle complement to Young’s opus, its sonorities descending first in scale, then on the instrument itself, winding up with Curtis bowing his cello’s metal end pin. Spare in means, “Naldjorlak” suggests radical sonic potentialities, embracing much that’s not played and then safeguarding its own frank beauty by not returning to the strings, as if Curtis were activating idle instruments in allegorical paintings.

At Diapason sound gallery, standing sine waves brushed snare drums for “Still and Moving Lines of Silence in Families of Hyperbolas,” an Alvin Lucier piece from the seventies. For the paired halves of “Charles Curtis,” double-stopped chords etched sleek or pulsing sonic alliances with sine tone clusters. “I wrote the piece for Charles out of friendship, and from hearing him play,” Lucier wrote in an email about last year’s Alvin Lucier (Antiopic/Sigma Editions), a double CD of penetrating studies played by Curtis and clarinetist Anthony Burr. The New York premiere of “Music for Cello and One or More Amplified Vases” had Curtis fronted by an array of Fred Stodder vases with microphones in their mouths. Their resonant frequencies swelled the teeming sonic atmosphere, with several volatile overflows that had soundman Burr diving for the mixing board’s volume pots.

Tonic was Waking States’ site for “Piece for Cello and Saxophone” by Terry Jennings, a 1960 composition that the unsung minimalist innovator intended to play with jazz bassist Scott LaFaro. (It’s also the one piece this reviewer missed.) For a Jennings memorial in ’89, Curtis played drones as La Monte Young sang his friend and fellow composer’s sax lines, which Young subsequently re-adapted for the cellist.

“The Jennings is emotional, and very ambiguous—or ambivalent,” Curtis said in an interview, responding to comparisons with the lead and drone cellos in “Just Charles.” “They use very different harmonic languages, with Jennings’ based on thirds, major/minor tonalities which La Monte eschews. La Monte’s music mirrors what he thinks of as universal; his piece is very divine. The Jennings is human, all too human—a stream of soft-edged minimalism, not as mechanistic as Reich or Glass or as evocatively exotic as Terry Riley.”

Morton Feldman’s “Patterns in a Chromatic Field” delved its intimacies among the Double Knot carpet gallery’s high plastered walls dampened by ornate carpet hangings, the audience overflowing onto rug mounds. Curtis sounded plaintive or fleet cello voicings into or out from surpassingly deft rhythms by pianist Aleck Karis, whose late piano chords shimmered on the brink of audibility. The duo’s ’04 Tzadik release set a high standard with a piece Feldman wrote the same year as his monumental piano solo, “Triadic Memories.” “Patterns” persistently varied roles of soloist and accompanist, its elusive repetition of cellular themes acute in a venue packed with the hue- and pattern-shifts Feldman admired on handmade Anatolian kilims, and where the wintry night’s second bout of clanking heater pipes sounded like part of the score.

“I’m extremely devoted to these people’s work,” said Curtis of the composers of his solos, which could qualify as an understatement. The cellist—currently professor of Contemporary Music Performance at UC San Diego, with recordings that include Shostakovich’s first Cello Concerto, sessions with Kathleen Battle and Wayne Shorter, and his own four-track Ultra White Violet Light/Sleep—would warm up with Bach suites while Radigue practiced yoga, as they worked on “Naldjorlak” in her Paris home. “I live with these things, [but] I don’t see it as collaborative. What I do is critical interpretation: It’s a critical examination of another artist’s work, taking a composer’s idea and getting inside of it in such a way that when I come out on the other side, the piece is not what it appeared to be at first.”

“His tuning for ‘Trio’ was dormant,” says Curtis, who first met the composer for 1987 performances of the piece. “He wasn’t familiar with just intonation as a methodology until about 1963. From other pieces of his that I performed—‘The Four Dreams of China,’ the solo piece—I think that the tuning became clear. I looked at it from the standpoint of somebody who would attempt to play it perfectly in tune, all the way through. I saw that the different constellations throughout the piece relate to each other as a Dream Chord, like seeing the needle in the haystack.”

A second cello augments the Ensemble "for the intonation. It’s one thing to have tuning ratios: This is 289/288, this one is 17/16, but that one is 18/17. The other thing is to play them without the benefit of [electronic] measuring devices. The beauty of tuning is that you’re drawing perfect geometrical shapes freehand. You’re drawing a straight line, then drawing another straight line exactly parallel to it.

“That’s an ongoing process, performing in ways that are closer to an absolutely static, absolutely stable tuning. With that, the piece gets longer.” September recording sessions had the hour-long original pushing eighty minutes; the forthcoming release will join an astonishing body of Young’s string works including “Five Small Pieces for String Quartet,” recorded by the Arditti Quartet, and “Chronos Kristalla,” commissioned by the Kronos Quartet and in the exacting rep of Klangforum Wien. “When you get really in tune,” Curtis adds, “you don’t want to stop. The famous Bruckner conductor Sergiu Celibidache said ‘When it sounds good, I always slow down; I want to make it last.’”

The true hedonistic live performance explosion will arrive when everyone present feels confident that the vaccinating drive is coping with the virus variants, but even so, progress will be measured among some quarters, and a rapid rush for others.