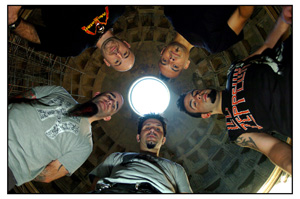 On the corner of Forty-Fourth and Broadway, below two facing marquees uneasily promoting “Fiddler on the Roof” and “Anthrax,” are visitors checking carefully to ensure they know exactly where their line begins and the other ends. Either group could be described as a mass who ventured into this tourist trap to watch middle-aged Jewish men sing, dance, and wax nostalgic about life vastly removed from Times Square. But I, at least, could not be paid enough to see Harvey Feinstein and Rosie O’Donnell revisit life in the shtetl. I came to see Anthrax because I absolutely love them. I walked away from the evening loving them even more.

I was nervous that the music might not hold up, or that what struck me so deeply when I was young would now seem clichéd or unnecessarily technical (a common criticism of metal). Worse, I feared that a band who were a crucial part of my childhood would come off as mercenary sell-outs, and I would leave feeling old. Anthrax might do nothing more than exploit today’s unquenchable appetite for nostalgia. Certainly, nostalgia is a self-conscious feature of the night.

The evening feels anachronistic and thrilling. Everyone is talking to strangers, particularly about their clothes. The outfits are graphically inspiring, a parade of shirts bearing long-forgotten logos, icons, and fonts. My friend Emily attracts particular attention. In an obscure, 1980’s-era, Antiques Roadshow–worthy shirt featuring a Where’s Waldo–like caricature of the band and the friends they met along the way, she has become an attention magnet. Throughout the night, people, including the band, mention what an impressive and covetable item she sports. Probably, they also gravitate towards us because there are few other women. It’s typical metal. The overwhelmingly male crowd is dominated by fanboy archetypes and their counterparts from earlier generations. They comprise a mix of receding hairlines and acne common only to high school graduations.

During the mid-eighties and early nineties, New York–based Anthrax was a pioneering thrash-metal band. Thrash is a highly technical and formulaic guitar-driven rock in which the singer becomes secondary to the licks and solos, and a rhythm guitar reinforces the unrelenting, frenetic, and oft-changing beat. For non-adherents, the licks that form the melody seem gimmicky, the solos interminable.

The genre tackles fearsome emotions that receptive listeners find no other adequate way to express or experience. The punishing technical demands and intense devotion to a specific formula create the grammar that makes this possible. As opposed to offering cathartic expression, where listeners feel and then release sufferings, thrash defines suffering that is already felt but remains—for all the power of the feeling—incomprehensible. Before I was old enough to rationally number or neuter any of my demons, metal was my native language of fear and anger. Metal remains my refuge when language fails me. In the months after September 11, I repeatedly played my copy of Slayer’s God Hates Us All, which was released that same day.

That album was a return to the classic formula of thrash, an assaultive and unsubtle approach to warding off the bogeymen of modern life: war, genocide, nuclear destruction, and personal alienation. Metal lyrics are rarely sophisticated—railing against the mistreatment of indigenous people in this country, Anthrax sings “Cry for the Indians, die for the Indians”—but they are heartfelt, and heart-wrenching. Metal’s appeal is not that it answers tough questions, but that it frames them. Identifying myself as a metalhead was a way of saying “I am troubled by what I see around me,” when those words were inaccessible.

Today, though, there is a broader spectrum of antisocial identities available to teenagers, so why choose the one with the least sex appeal? Looking around the Nokia Theater at the fifteen-year-old boys with greasy hair and Iron Maiden T-shirts, metalhead-dom still seems a great way not to get laid. While still surprisingly abundant, metalheads are in fact significantly fewer in number than they once were. Clearly, the music does not provide the same tribal identity it once did. But, even in the face of dwindling audiences, the songs have not lost their power; I assume these kids just have good taste.

Introducing “A Skeleton in the Closet,” Anthrax guitarist Scott Ian, best known as a VH1 pundit who enjoys dipping his beard in paint, remarked, “This is the heaviest thing we’ve ever written.” It remains one of the heaviest things I’ve ever heard. Based on Steven King’s story about discovering a former SS officer living next door, the song is one of heavy metal’s “Nazi” cannon. “Angel of Death,” Slayer’s meditation on Joseph Mengele, is by far the most explicit treatment of the Holocaust. But in Slayer’s song, Mengele is portrayed as a mythic evil from a mythic time and place. “A Skeleton in the Closet” is unquestionably more menacing. I am haunted by the thought that after waving to me from his mailbox, my smiling neighbor plots a return to his glory days as a murderous Nazi. It seems a reasonable and not at all baseless fear. And hearing Anthrax confront this possibility is incomparably comforting and terrifying. They are not making metaphor from evil, they are just laying it out for what it is.

“A Skeleton in the Closet” can also be seen as a metaphor: Behind closed doors, placid suburban life is rotten and evil after all. The literal reading, however, is more significant and indicative of what makes Anthrax unusual within metal. It’s a song primarily about what Jews fear most, driven by Ian, one of the most prominent Jews in metal. Anthrax is not a WASP-y suburban band, they are from and of New York.

As early as 1986, Anthrax tried their hand at a rap song. “I’m the Man” is more important and charming than good, but it’s both very important and improbably charming. The song (whose most memorable lyric might be, “Danny farted the farts the farts he farted, I pick my nose but I’m not retarded”) is more like a lowbrow version of Joe Walsh’s annoying yet occasionally witty “Life’s Been Good” than anything by NWA or even the Beastie Boys. Yet “I’m the Man” has remained a crowd favorite throughout the band’s tenure. It’s a good-natured and good-humored effort in a genre short on humor and possibly goodness. Many misread the song as a mocking take on rap. That interpretation was shattered when the band teamed up with Public Enemy to remake PE’s “Bring the Noise.” The remake is slightly less powerful than the original, but it’s compelling. The combination could have easily ended up dissonant, but Chuck D’s voice and Anthrax’s guitars both contain a barely contained rage which supplement each other’s weaknesses. Together, they refine bile to its purist, most universal form.

Anthrax’s rap excursions are far from my favorite songs. But they distill everything I love about the band. In them, Anthrax comes across as charming yet furious. Anthrax is by far the most inviting of the thrash-metal giants. They popularized the gang vocal chorus in metal, which gave ample opportunities for audience participation during their shows. At the Nokia Theater gig, the warmest part of the show came towards the end, when Ian invited the crowd to “Do it Like L’Amour’s,” and we ignited into old-school moshing and tuneless but enthusiastic shouting.

L’Amour is the landmark Brooklyn venue in which Anthrax made their name and developed their craft. It’s also where I used to sneak out my bathroom window to go see Biohazard play in the early nineties. The Nokia Theater is entirely dissimilar from L’Amour—it’s a sanitized, shiny place, converted from a movie theater. The bar is an obvious concession stand, the ceiling is overly high, and the stage is strangely distant. The venue encourages critical distance, not passionate interaction. But when the band implored the crowd to make ourselves at home, metal again offered an opportunity for us to be comfortable with the world and our own fearsome and occasionally ridiculous aspects.

Sarahjane Blum is a New York City based writer and author of Marriage is Back: The Real Woman’s Guide to Meeting and Marrying.

A quintet (sax, trumpet, piano, bass, drums) led by a legendary saxophonist is booked for two nights at a midtown jazz club. The first evening gets off to a bad start when the piano player, who has a long history of alcoholism and mental health problems, tells the sax player, who himself has struggled with heroin addiction, “You ain’t playing shit no more.”

It’s the mid-1970s. A young abstract painter who has moved to New York from Southern California finds a studio near City Hall on Lower Broadway.