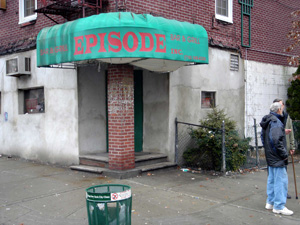 The forty homeless alcoholics Pukianiec is helping are illegal Polish immigrants who can’t speak English. They sleep in abandoned buildings at the waterfront or in open graves at Calvary cemetery. “They organize like animals and would rather sleep in ruins than in the shelter where no one speaks Polish and where they break up their groups and disperse them all over the city,” Pukianiec says. Some of them check into the five-day detox program at Woodhull Hospital in Bushwick, the only one in the city that treats illegal immigrants.

“But five days is nothing. They just check in to have a warm bed for a few days,” Pukianiec, who once lived such a life, knows. When he came to New York 30 years ago, Pukianiec was a young surgeon looking forward to a new life. He failed to pass the exams to practice medicine in the United States for ten consecutive years. His English wasn’t good enough and his knowledge of medical science was, compared to American standards, outdated.

“You send money home to your girlfriend who you hope will soon join you in America. Then you find out that she is spending the money with another guy,” Pukianiec says, either telling his own story or recounting a familiar tale of the despair many immigrants suffer. “I lost faith in God,” he continues. “I collapsed.”

Years of homelessness and alcoholism followed. He became sick with cirrhosis of the pancreas and diabetes. “Suddenly I tried to wake up. It was the last chance.” A Jewish-Polish couple, doctors like him, took Pukianiec in and nursed him back to health. “Today I fill an empty space,” he says about his work with Greenpoint’s alcoholics.

Pukianiec’s story puts the two homeless men to sleep on their chairs. “The men are homesick,” Pukianiec says. “Their families split up, they can’t communicate and they have a lot of aggression in them. In Poland they might have been functioning alcoholics; they had work and a support system. But here bad tendencies increase and the men find themselves on a different social level. In New York,” he adds, “they live like on the moon.”

Some of the men dream of going back to Poland but are embarrassed to go back empty-handed, says Pukianiec. “You know, in Poland there is this dream of America and the big money. And often this dream becomes reality, but sometimes it doesn’t.”

Walking down Manhattan Avenue in Greenpoint, pedestrians sometimes have to dodge tottering men. Drunks lean on parking meters and hold onto phone booths to regain their balance. Occasionally this tragic story of addiction and homelessness penetrates the public consciousness. In mid-January, when temperatures dropped below freezing, two Polish men froze to death in a makeshift shack in Greenpoint’s deserted industrial area.

“The men came here every night to drink and sleep,” Antonio Hernandez, an El Salvadorian security guard at a lot nearby, says. “They have nothing,” he says with empathy. “People sometimes put food next to the trash cans for them.”

Alcoholism is a pronounced and neglected problem in Greenpoint. The Brooklyn neighborhood of 40,000 has 18 Alcoholics Anonymous meetings per week, an astonishing number compared to the five weekly meetings in the neighboring Williamsburg, with 85,000 residents.

But these numbers only tell part of the story. Half of Greenpoint’s residents are Polish and a fifth are Hispanic. Counting illegal Polish residents, who might be an additional 30% of the population (in line with the estimations of Pukianiec and Shawn Lynn, the director of the local Outreach Project), the total number of Poles in Greenpoint may be as high as 30,000.

Illegal immigrants—and legal ones still waiting for their temporary green card—don’t have access to health insurance and it is unclear to what extent their well- or ill-being is reflected in the State Health Department’s data. People without health insurance might hesitate to seek medical or psychological help, and accordingly may not be included in the hospital statistics stating liver disease, mental illness and intoxication.

Shawn Lynn, who offers outpatient therapy and psychopharmacological counseling to “working, functional alcoholics” at the state- and city-funded Outreach Program, confirms that access to health care and psychological counseling is very limited for recent immigrants. “Most of the immigrants only show up in the hospital when they are half dead. They either ignore their illnesses or treat them with some kind of home remedy, or,” he laughs, “self-medicate with alcohol.”

According to Lynn, for many immigrants alcohol is a socially accepted form of self-medication for the loss of extended families and the sights, sounds, and smells of the old country. “It’s a way of managing the mourning process,” he explains. His American clients, regardless of age, and his Polish clients under 30 suffer from a wide range of addictions. His Polish clients over 30 suffer exclusively from alcoholism.

For Polish people who don’t speak English, help is particularly hard to find. The Outreach Project on Manhattan Avenue is one of only two addiction clinics in New York City with a Polish-speaking staff. The other clinic is Unitas at St. Marks Place in Manhattan. “If you are American, you have options for treatment in whatever neighborhood you live in, but if you are Polish your options are very limited,” Lynn, whose Polish clients come from as far away as Connecticut to seek treatment in Greenpoint, says.

A 63-year-old Polish man and his wife own one of several stores located within six blocks north of the Greenpoint Ave. subway station. Eight years ago when they first opened the store, they struggled to learn how to run the business. “At first we would open at eight in the morning and the bums would already be waiting outside to buy their Night Train and White Rose. Now we open at 10 and have a surveillance system. And we have changed to more expensive merchandise,” the man says, sipping a whiskey and lighting a cigarette.

“The Polish buy vodka, the artists buy wine, and the Hispanics buy rum,” the liquor store owner says. “But the Hispanics don’t lie down on the sidewalk like the Poles,” he adds not without respect, and points across the street to “the bums” napping on a layer of cardboard boxes outside of Episode, a bar long ago abandoned.

Asked whether he thinks that alcoholism is more prevalent among the Polish people in the neighborhood than other ethnicities, he hesitates. “No, not necessarily. But in Poland people are more used to celebrating every possible occasion with alcohol. My theory is that drinking was encouraged in communist Poland. Alcohol was often given as a bribe.” The storeowner takes a drag from his cigarette and ashes on the floor behind the counter. “We are decent people and we would be happy to only sell to people who drink responsibly, but we have no choice than to sell to alcoholics. That’s our business,” he says, estimating that roughly 15% of his customers are alcoholics. The “frequent flyers,” as he calls them, account for a significant share of his income. “As long as the customer is sober we have to sell the merchandise,” he says. “Well, a few times a wife or daughter came in and asked us not to sell to her husband or father anymore. So we would send him away. But what does it help? They’ll just go to the liquor store down the street.”

The door jingles regularly as customers, mostly men in their forties and fifties, come in and leave with a bottle or two under their arm, while the two clerks run between the shelves of booze and the cash register. The storeowner has almost finished his glass of whiskey. “In the winter, business is much better than in the summer,” he says, eyeing the line of men by the counter, “because people need much more liquor to get drunk.”

In his attempt to mobilize the neighborhood to help homeless alcoholics, Pukianiec has often felt frustrated. “The Americans are not too much interested in the problem,” he says, “and the Polish are too individualistic. They are not organized and don’t cooperate. Most of them are very successful here and very religious. But sometimes, I think, they don’t know what religion really means.”

Darek Bugnacki works at the wood company next to the lot where the two homeless men froze to death in January. He once took a homeless man in, cleaned, and fed him. But only a few months later the man was drunk again. “In the end it’s up to you whether you want to quit. How can you help?” Bugnacki frowns. “It costs time and money. And who has that?”

Pukianiec’s goal is to obtain funding from the Polish and Slavic Federal Credit Union to hire a Polish-speaking social worker and rent a place where homeless alcoholics can spend the day. “Communication is important,” he says, “and there is not enough communication in Greenpoint.”

Shawn Lynn also regrets the lack of communication. “From a large-scale perspective our efforts are inefficient because we don’t address many of the social dynamics. But we are not geared to being a prevention or intervention clinic.” There is “no cohesive community interest in discussing the issue” and “no initiative from the community board,” Lynn adds.

The local community board, in fact, refers callers asking about initiatives against alcoholism in Greenpoint to the Outreach Project. “We don’t deal with the issue,” the person who answered the phone says. “We help with the funding, but there is a local group, the Outreach Project, who deals with the problem, ma’am.”

The police, church, medical clinics, and Outreach Project refer patients to one another but hardly ever collaborate on a broader basis. Lynn knows that to achieve success on a more comprehensive level the government and the community as a whole have to step in and improve the adaptation process for immigrants. “Better affordable housing would, for example, decrease the stress among immigrants. And less cultural isolation and ghettoization,” Lynn says.

But until that happens, groups and individuals will continue to fight the vicious cycle of alcoholism with their own means, be it therapy, law enforcement, or a cup of tea, some kindhearted company and a chair to snooze on.

Sabine Heinlein is a freelance writer who lives in Greenpoint.