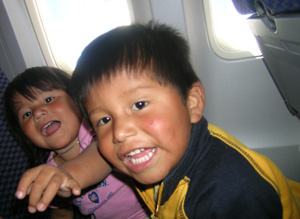 At present, my greatest fear is not that I will be mistaken for a kidnapper, or a child molester, or someone set on bringing a two-year-old girl and her three-year-old brother from Mexico to the United States on a diabolical organ transplant scheme. My concern is less fantastic, and more frightening: I am worried that once we board the plane from Mexico City to Newark, Jackie and Juan will begin to cry and I won’t know how to get them to stop.

This crisis began with an email from a friend that I received two days earlier, while staying in a Mexico City hotel. After spending a month traveling around southern Mexico, I was in the capitol waiting for a flight back to New York City. “How would you feel about becoming a coyote?” the friend wrote, referring to human smugglers.

He went on to explain: a woman, let’s call her Diega, had crossed the border illegally with her husband in 1996, settling down in Brooklyn. Last year, Diega learned that her grandmother in Mexico had become ill. With her husband working full-time at a laundromat, Diega had no choice but to take their two kids—both U.S. citizens—with her to Mexico.

Ten months later, her grandmother nursed back to health, Diega had another dilemma: how to get the kids back home? She wasn’t about to bring them along on the all-night border trek across the desert; they were “legal,” after all. And so she left her children with her mother, successfully evaded border patrol agents in Arizona, and was now looking for an American citizen that could accompany Jackie and Juan on a return flight. Hence the email and my two new pieces of carry-on luggage.

Just as I feared, Jackie begins to shriek the moment we step into the cabin of the plane. All heads in first class snap up, and two passengers sipping wine (at 8 a.m., no less) make eye contact with each other, sharing glances of anger and irritation: I paid good money and this is going to be one of those flights? I tighten my grip on Jackie and shoot back a righteous look of my own: Yeah, well you don’t have to sit with them. If I’m reading their eyes correctly, neither is especially sympathetic to my plight.

Our seats aren’t together, but I claim a row towards the back. Several minutes later a man and woman dressed in matching gray suits stop at our aisle. Jackie is still screaming, so I hand her Juan’s passport, open to his photo. “Juan!” she yells, jabbing at the picture and then at her brother, who is now standing on his seat and appears to be licking the window.

The man pulls out his ticket and looks up at the number above my head. “You are in our seats,” he says in English. I leave Jackie to her pointing and Juan to whatever it is he’s doing to the window, and show him my tickets.

“Yes, I know it’s technically your seat. But I’m traveling with these two children alone and need to be with them. Would you mind switching?” I extend my hand with the ticket, hoping to make a quick trade.

He scoffs at the offer. “That’s not my ticket, that’s your ticket. My wife and I paid for these two seats here.” He points accusingly at Jackie and Juan, who are now staring at him in silence.

“Stewardess!” he calls down the aisle, spittle flying. “This man has taken our seats. Me and my wife must sit together, but he says that he won’t move!” He stares at me. The attendant reviews our tickets. I explain my story again.

She is sympathetic. “I can’t separate these kids. Move up front and I’ll get someone to switch and come back here.” Victorious, I watch as the man heads with his wife to their new seat assignments. Twice he turns back to glare. Twice I smile and wave.

I spend the flight creating distraction after distraction to ward off Jackie’s tears, most involving my digital camera and the tray table. Juan, a year older, remains quiet, though he taps on the plane’s small window incessantly. A diaper is somehow changed. Bottles of milk are depleted. My glasses are nearly broken. I will later be upset to discover in the living room of my Brooklyn apartment that my wallet has gone missing, but in that moment when Juan and Jackie finally fall asleep somewhere over Pennsylvania, my mood is ebullient. I look at them leaning against each other with the seatbelt fastened across their waists, and feel a wave of sweet relief. This is going to work.

As the plane begins its descent, the air pressure builds. Jackie is the first to wake up. I tell her that the pain is normal, a sign that we are almost home. She smiles briefly at this, but then grimaces. Now Juan wakes up, holding his ears and looking at me for guidance.

“It’s okay, we’re almost home. Just a little bit farther.” Jackie lets out a whimper-sob. We only met several hours ago, but I already recognize this to be a very bad sign: she will be screaming within seconds.

I have run out of distractions, and not knowing what else to do, I ask Juan for help. “Do you think you can keep her quiet?”

Juan considers the question and then nods solemnly. “Don’t cry,” Juan says gently, putting his arm around his sister. “Don’t cry,” even gentler now. “We are going home to live with mamá and papá.”

“¿Mamá?” Juan nods again. Jackie tightens the grip on her ears but doesn’t make a sound. She leans harder into Juan’s shoulder. For twenty minutes they stare forward in silence, occasionally grimacing and then ratcheting up the grip on their ears. Eventually they fall back asleep.

When we land, an immigration officer has a few questions. I mumble something about a family emergency and hand over a letter faxed by the parents, which if legible would have granted me permission to travel with the children. Ink must have been low. Amazingly, the agent ushers us through.

Exiting the airport, I hold Juan’s hand and Juan holds Jackie’s hand; we form a three-person barricade moving slowly through a rush of business travelers late for meetings. I am looking ahead for the mother, eager to deliver my cargo.

“Jackie, come here!” Juan’s sister has slipped his grip and begun wandering away, but he grabs her just in time. We resume our steady march, passing through a pair of sliding glass doors and into the humidity of July, where Diega is waiting anxiously outside. After many hugs we pile into a taxi. As the driver darts into a stream of cars heading towards Brooklyn, Juan taps on the window and then sits back and begins to tell Diega about the flight home, about how he took care of the man now slumped over in the passenger seat.

The mother told the boy that after his birth, names flew through her head: Typhus, Suffering, Beast. But she told Adam to name his child, like he’d named the first one, the girl, Ellie. He decided on Matthew, which seemed unlikely to offend.