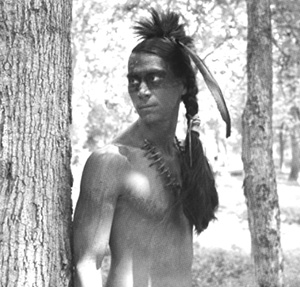 1) THE NEW WORLD
A Dream Too Real

Terrence Malick’s The Thin Red Line, was a $70 million dollar art-film, a war movie edited not for action, but to reveal each character’s emotional state, moment to moment. In other words, Malick makes dreams. Time and geography have little meaning in his films. Yet each place is quite specific in its particulars and its gestalt. Events—presented with such reality—are never quite placed in sequence to one another. Characters drift in and out, seasons take forever, end in a blink, then return. The New World is a Debussy symphony (or, if you prefer, a Glenn Branca) that rises and keeps forming and re-forming around you, and you don’t realize how deeply you’re in its current. Malick’s magical narrative is so gripping and dynamic that when the lights come up at picture’s end, it’s a realization—a shock—how thoroughly you were swept away. Even as you think: how can this simple shot of two lovers walking in the woods be so moving—you’re moved by it.

Malick shows us a cataclysm—that rare moment: we are there when something happens for the first time. The love between Pocahontas and John Smith becomes a metaphor for how a self-loathing consciousness denies love and Eden, while a pure heart (whether of a person or a landscape) sees through to the truth without fear.

The 150 minute original theatrical release has been trimmed to 135 minutes. The projected director’s cut DVD will run 180. As with dreams, so goes Malick: no such thing as a middle ground..

Solipsistic ghosts = the dead spilling into the living world, seeking a connection they could never find while alive.

They won’t find it while dead, either.

3) LAYER CAKE
British Film Noir means class war, style as armor, plot contained in dialogue, brutality, an awareness of the Brit noir that came before, and brains. No great British noir is dumb, and you sure can’t say that about American noir. Layer Cake soars on the credibly ambiguous ambition of its hero, and of how near to his cool surface lies the existential terror that runs him. We never know his name, but for all his representing, he’s not so sure who he is, either. It’s a morals lesson with sharp suits, cracking dialogue, an almost flawless soundtrack, bemused violence and a vicious, understated British sense of humor. “Fellow tries to sell his soul to the Devil,” a character tell us. “It all ends in tears; these arrangements usually do.”

4) CACHE´
Michael Haneke (Funny Games, The Piano Teacher) built his oeuvre on the dread and denial underlying bourgeois serenity. He’s fascinated by the comfortable class’ outraged paralysis when manners break down and the shadow comes out to play. Because that fascination is genuine, at least once in every film there will be a moment you cannot bear to watch. (Funny Games remains the only film in my life I found too upsetting to sit through.) While the American reviewers focused on the technoporn voyeurism of Caché, that aspect is only a means to Haneke’s ends. This is an overtly political film, and its domestic release during the riots in the projects surrounding Paris could not have been better timed. Through his repressed and peevish urbane characters, Haneke explores the slow bubbling up of France’s guilty secret, long suppressed: the social and psychological detritus from its colonial era and the Algerian war of independence. I doubt the French liked being lectured on their dirty past by an Austrian, but the subject matter must touch Haneke. He shows more humanity, or concern for it, than any in other film.

I don’t know what you saw in that final shot, but for me it suggested collusion between the two sons. Given that Haneke embraces neither charity nor redemption, if the boys are colluding, then the past and the future are about to wreak terrible vengeance on the present…. As for the glacial pacing, try this fun activity: when the endless static interior shots start to drag, take visual notes on the stellar interior decorating: excellent ideas are on display for the TV or dining room.

5) SERENITY
The proud descendent of A Boy & His Dog, Cherry 2000 and Pitch Black, only better—a heartfelt, anti-ironic rocket-ship adventure, admirable for its straight-forward attention to character (however thin) & plot, and a complete absence of bullshit or padding. Staunchly good-hearted, Serenity acts like it’s 1965 and none of us have seen a cool rocket cowboy before. Worthy low-budget casting (not just no stars—no recognizable faces), superior jiggle interest of both genders, quirky comic-book dialogue and killer space battles add up to unabashed, sincere genre executed with pride in genre principles. Plus a villain too Shakespearean and self-hating to really be dead—I’m sure he’ll return for what I hope will be a sequel. Proof when we needed it—think of King Kong, Munich, Syriana, Pride & Prejudice, etc.—that rigor and wit will get you through films of no budget better than big budgets will get you through films of no rigor or wit.

6) THE Squid and the whale
Want to get back at your parents? Never mind suicide; try writing a dead-on memoir, presenting Mom and Dad’s vanity/assholery in their own words in a deadpan, distanced frame. Forgoing Wes Anderson mannerism and Whit Stillman cuteness, Noah Baumbach finds a middle ground between The Ice Storm and The Royal Tenenbaums, more straightforward and less self-consciousness than either. The absolute conviction of his vengeance-memoir and the outraged pain underlying comes through not as an adolescent howl, but as the coldly calculated taking apart of one adult by another. Surprising that so much press fixates on his anger at Daddy. Mommy don’t come off so great, neither. A couple of under-written characters and reliance on easy gags doesn’t diminish the most cringe-worthy moments, which really linger.

7) CAPOTE
This compassionate, nuanced indie-mainstream picture that you’ve already read a million words about is, in fact, everything you’ve read: ruthless, vivid and startling in what it reveals about the vampirism of journalism, the irresistable seduction of self-destruction and what happens when you stare too long into Ye Olde Abysse. For what is essentially a sophisticated docu-drama, there’s more Fritz Lang noir than any noir in years.

Unrelentingly mean-spirited until the final shot, which is disappointing. Why would we want the nastiest heroine of the year to grow a conscience? No social satire based on the sex life of a fifteen year old could be called Swiftian, but for outrageous misanthropy, Persuasion burns with a righteous fire that is so ‘00s. A triumph of set-pieces and dialogue-nuggets, and of James Woods apparently being himself. On drugs.

9) ONG BAK THAI WARRIOR
The trouble with those beloved early Bruce Lee films is the labored narrative building to the chop-saki. Ong Bak leaps this hurdle as its hero leaps over people’s heads (Tony Jaa’s got serious ups). While not exactly engaging, the ramp-up’s sufficiently watchable and astutely short-lived. Tony Jaa, like Bruce Lee, mixes startling grace with animal ferocity. If he’s not quite as graceful as the former Hong Kong cha-cha champion, Jaa’s so much more ferocious it’s unnerving. Lacking Lee’s pretensions to bourgeois respectability, Jaa fights with an animal rage that still somehow contains a Lee-ian restraint. No matter how much ass he kicks or how many necks he elbows in mid-air, you wonder: What’s going to happen when this guy really lets go? Then, in the final fight, you find out. They don’t call that shit ‘climactic’ for nothing.

10) Guilty Pleasure of the Year:
MR. AND MRS. SMITH

1) It’s charming and less pro forma than you think.

2) Plot? I’m sure there’s a plot in here someplace.

the one thing he does credibly.

5) No matter how smart we think we are, we remain

David N Meyer’s Spring ‘06 course at the NewSchool: Brit Noir; The Savage Elegance of the British Gangster Film, can be registered for online at www.Newschool.edu