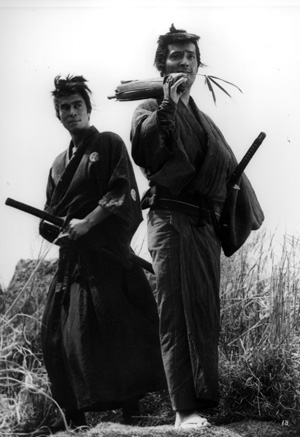 Criterion’s Rebel Samurai box set features four gripping entries in the genre, all depicting men challenged by unscrupulous hierarchies struggling for power: Sword of the Beast; Samurai Spy; Samurai Rebellion; Kill! These four pictures offer alook at the second wave of post war samurai films and the key directors who emerged from that wave. Focusing on the perennial samurai dilemma of giri (duty) versus ninjo (morality) allowed each auteur to make his mark artistically despite genre convention. These directors were in a sense rebellious like the samurai of their films, and still very much aware of their duty.

Samurai, like cowboy heroes, lived and were defined by a code of honor and morality. But what does a samurai do when pushed to the limit of his convictions? After being tricked into killing the counselor of his clan, Gennosuke (Mikijiro Hira), the protagonist of Hideo Gosha’s Sword of the Beast (1965), faces his pursuers with the fervor of a cornered animal. Gosha’s film has an abundance of brisk paced, well choreographed chanbara (sword swinging) action but what really stands out is how his gritty, naturalistic style reflects the vehement angst with which this anti-hero reacts to the corrupt world around him.

Samurai Spy (1965)plays almost like a Saturday matinee serial with damsels in distress, ninjas leaping through the air, face- offs atop bridges and so forth. However, director Masahiro Shinoda, who brought us the lyrical yakuza noir Pale Flower, imbues his work with an impressionistic element through stylized montage and unusual framing, catapulting this yarn beyond formulaic conventions. All the films in this box are lusciously shot in B/W but Shinoda finds moments to utilize light and dark as a metaphor for the film’s diegetic as well as emotional complexities.

What makes the Criterion brand so transcendent, so necessary, is their ability to combine PBS-style austerity with an acute genre sensibility. Authors of the attached essays include Japanese film luminaries like Donald Ritchie (A Hundred Years of Japanese Film) and Alain Silver (The Samurai Film) as well as Patrick Macias, author of Tokyo scope, a study of Japanese cult and trash films. Masaki Kobayashi’s Samurai Rebellion (1967), more so than the other films included, has the classic and prestigious feel that western audiences may be more accustomed to (being familiar with Kurosawa’s oeuvre or Kobayashi’s Hara Kiri and Kwaidan). The drama is Shakespearean, building slowly but intensely, perfectly mirrored by the extraordinary restraint that Toshiro Mifune’s character exhibits. Only in the final reel do the film’s dramatic tensions finally explode in a barrage of physical action. And do they ever explode.

Kihachi Okamoto offers the other extreme of the samurai film with Kill (1968). All archetypes are exaggerated to the max, allowing a chaotic send-up of the chanbara genre. Tatsuya Nakadai gleefully wallows in the comic side of his ronin character, a stark contrast to the characterization of pure evil that he delivered in Okamoto’s Sword of Doom. The convoluted plot gets a little hard to follow (interestingly it was based on the same novel that served as the source for Kurosawa’s Sanjuro) but the odd assortment of characters and Spaghetti Western style abandon manage to bring it to a rollicking finish; thus making Kill! the perfect capper to the set.

Punishment Park, the 1971 film from Peter Watkins, looks, sounds and feels like a fifty thousand dollar 1970’s radical film—dated, lopsided and simplistic. Where shooting with a hand-held 16mm mock-documentary style may have been fresh and innovative three decades ago, it feels too tired now to have much impact. (Blair Witch finished it for me). Given the repressive times, obvious parallels will be drawn between the never-invoked 1950’s McCarren Act, (the basis for the film) and the current Patriot Act. PunishmentPark is a desert sanctuary into which political dissenters are abandoned. They must literally run for their lives from law enforcement. If they survive, they’re free. Few do. It speaks to the times, and to Watkins lack of subtlety, that a film could be made portraying a government that treats any squeaky wheel as hunting practice. As a document of its time and place, and of the outrage extant, it’s indispensable and accurate. That doesn’t make it easy to sit through.

Director Peter Watkins gave his cast of mostly non-actors the freedom to develop their characters and utilize dialogue to voice their political views. The result feels over-improvised and under-directed; the resulting dialogue is repetitive and one-dimensional. After five too many “groovy” and “cat” rants I felt like siding with “The Man” and casting the Yippies to the desert, not because I disagreed with their politics particularly, but because they’re so fucking annoying.

Served up as a mad mix-tape of decisively Japanese influences, Ka mikaze Girls never fails to transcend its cultural context, playing out like a funnier Ghost World at 1000 beats per minute. The soundtrack kicks with music by Yoko Kanno (of Cowboy Bebop fame) and dynamic visuals by Nakashima and cinematographer Shoichi Ato. The film occasionally shifts into animated scenes courtesy of STUDIO 4°C (led by Studio Ghibli alumnus Eiko Tanaka). J-pop import kings Viz released the DVD last month, loaded with all the prerequisite interviews, music videos and extras.

The film saw a limited run throughout 2005 in the US, playing at the New York Asian Film Festival and followed up by a two week engagement at Village East. Cherished by fans, a typical screening brings Western Lolitas and Yankis out in droves (where do you hide the rest of the year?) with fans dressing up not only as their favorite characters, but in their own extraordinary designs as well. Look for New York theatres to get hip to this with Kamikaze Girls ripe for the midnight movie circuit.

Like Leone’s Westerns, Le Samourai invents a genre while transcending it. Jean-Pierre Melville’s cool Zen-noir, in which style and substance are so intertwined as to be inseparable, relies a savoring of noir conventions, on deafening ambient sound (no silent room in any film was ever louder than the many silent rooms in Le Samourai), almost no dialogue and the willingness of the viewer to be entranced (that is, the film is really slow). Alain Delon plays a mysterious hitman; the movie opens with a shot of an apparently empty room. We only know Delon’s there when he exhales a lungful of Galoise Blue. Thus Melville lets us know from the get-go that Delon’s character is all myth—he has no more reality than a puff of smoke. Yet, he’s fascinating…Delon’s pulls a contract job, leaves a witness alive, visits his mistress, steals a car, uses his pet canary to detect eavesdropping equipment left in his bed-sit by blundering cops, steals another car, beats the living daylights out of a couple of French hoods and takes a very long, complicated ride on Le Metro. The effect owes more to Bresson than Bob Le Flambeur (Melville’s comedy of manners masquerading as a bank-heist flick). Delon and Melville are after transcendence, a Zen doing so perfect that the task becomes irrelevant. Both achieve it. This work of genius has been a Holy Grail for noir-heads, Melville devotees and uh, transcendentalists for years. Our suffering at the hands of shit VHS copies & grainy French-format imports is over. Film Forum showed an awe-inspiring print last year; now Criterion has brought out the DVD version the film deserves. Features include an interview with Rui Noqueira, author of Melville On Melville, archival interviews with Melville & Delon, and an essay from David Thomson. Unlike most DVD extras, these add value and insight to the film. Go buy it right now—if Criterion sells enough copies, maybe they’ll bring out Melville’s truly unseen masterpiece Le Deuxiéme Souffle.

Whatever vehicle, be it Greek myth, meditation, or moral, that could be used to orient oneself in Dimitris Papaioannou’s most recent piece, none prove useful.

In his drawings, as in his writings, Motherwell argued that the expressive tools of abstraction were not only valid, but among the most powerful means an artist possesses for fully communicating human experience and feeling, including political events and realities.