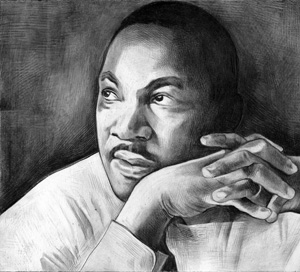 In elementary school, there are the dittoes. They appear every January 15—purple, mimeographed sheets of paper with a picture of Martin Luther King, Jr. superimposed on a rippling American flag, a quote from “I Have a Dream,” and a few questions and blanks to fill in from the word bank on the side: “Martin Luther King, Jr. worked for people of all races.”

My ditto did not include the fact that in 1963, King led the schoolchildren in Birmingham, Alabama out of their classrooms and into the streets to demand an end to segregation. We did not learn that while now we took the day off from school, the children of that not so distant time and place marched out of their schools singing “We Shall Overcome.”

My high school history textbook, falsely promising, bore a black and white picture of the 1963 March on Washington splayed across its front and back covers. It was called The National Experience. It was about, predictably, the national white male experience, and also the experience of the U.S. dollar.

My textbook also reported that Robert F. Kennedy was a “great friend of America’s black people,” and that John F. Kennedy will always be remembered for his progressive efforts toward racial equality. This textbook, happy to literally wrap itself in the most triumphant image of the Civil Rights movement, did not include the information that Robert F. Kennedy had approved a wiretap on King’s phone as part of a secret FBI “counterintelligence program” (COINTELPRO), which was designed to undermine dissident movements.
In every set of images intended to arouse or implant in the viewer an instantaneous sense of political and historical nostalgia, one can find Martin Luther King, Jr., more often than not, in a recognizable highlight reel. The “I Have a Dream” speech reverberates across the Mall, John F. Kennedy becomes a physics problem in Dallas, Neil Armstrong toddles down the ladder and lands on the moon.

I was born in 1979, and so the only montage-worthy event I ever watched live was the launch of the Challenger, which exploded in a tiny “pop” on my television screen. And yet, the American history montages are eminently readable to me. I see them and I settle down to work from and talk about the great common knowledge of our country, the events that, if we have not lived through them, we can draw upon for an amorphous and predictable feeling of pride. The patriotic pride an American is supposed to feel watching Armstrong land on the moon is set up to be synonymous with the pride that American can feel watching King. It draws upon a common ownership of a symbol. For an American who absorbs these images uncritically, Martin Luther King represents a finished story, not an unanswered question. Reading him as a symbol and not a theorist absolves Americans of shame and instills them instead with pride—a pride that the American historical consumer has about as much right to as a claim that he has walked on the moon.

What does it mean when we find a radical, an intellectual, an organizer, movement leader and a one-time enemy of the state on our mimeographed dittoes, on our televisions as a symbol of all that makes America so supposedly great? Or, to put the events in the right order, what does it mean when we find that the figure we have absorbed as an example of all that is good and right about America—the inalienable fact that America rises to the challenges put forth by the people who rise to America’s challenge, the “challenge of freedom,” as one textbook so audaciously calls it, an example that American freedoms exist so that people who exercise them may right America’s wrongs; that we have had good presidents and these men have supported Civil Rights in this country; that when America oppresses it does so as an oversight, as a mis-execution and not a misconception of democracy; and when America is asked to change, she changes—what does it mean when we find that the emblem of all these truths was, and despite all scrutiny and in spite of all representation remains, a radical, an organizer, and an enemy of the state? What does it mean when Martin Luther King, Jr. rises from the mimeographed sheet, speaks and writes about realities and not only dreams, identifies problems and imperatives and revolutionary undertones in America, and we find that these problems and imperatives and undertones were not answered, addressed and solved, as our history would have us believe, but still exist today? And that this revolutionary call to action could and should still be audible? What happens when the symbol that evokes our nostalgia, the fond figure of our shared mythology, is unfrozen in time?

Before we ask these questions, we must first raise others: what does it mean to freeze a radical thinker and actor in mythology? To neutralize politics with reductive symbolism? How does the state succeed in first neutralizing a political actor and his writings, and then co-opting his action and his message as something that was always possible? How does the state take the hard-won triumphs of a movement that directly confronted it and turn them into all-encompassing solutions devised by the state itself?

Lurking in the process of Martin Luther King Jr.’s iconification has been a simultaneous process of political neutralization. King functions as a historical fossil—the living matter of his work and thought replaced by the mineral deposits of patriotism. In place of a recognition of the revolutionary potential of King’s writings and work we have an unproductive (an unwinnable) debate on revolutionary status of the “figure” of Martin Luther King; instead of an examination and animation of the writings of the intellectual and the work of the political leader. The way he is taught to children in schools, King is a vaccination. A deliberately small slice of his life and work are used to inoculate children against radical thoughts and ideas. He is introduced to the minds of children in a dead, harmless form. Dream, don’t hate, but never criticize, organize or resist. Like a virus they will never catch, King’s most powerful ideas are neutralized until they are powerless to infect the next generation with anything more than an immunity to action.

On Martin Luther King Day in 2006, George W. Bush stood under a twenty-foot banner of King’s likeness and gave the obligatory speech. He said, cryptically—and yet all too tellingly—that “Our Constitution was written to put the principles of a free and equal society into practice…[Dr. King] to trust in their power even when the practice of America did not live up to their promise.”

Forty years ago King led invasions of the nation’s capitol, demanding to be heard. Now his image and most innocuous quotations are soundbites for politicians. It is politically expedient for politicians to annually invoke King’s memory before they get back to the business of sowing racism, poverty and war. In George W. Bush’s case, if he can invoke King and the Founding Fathers at the same time, so much the better.

The same politicians who opposed a federal holiday honoring King now regularly stand up and “remember” him, even if their own counterparts were wiretapping King’s phone when he was alive, even if King might be called a terrorist if he were alive today. When this year’s State of the Union address fell on the day Coretta Scott King died, Bush took the opportunity to remind us that, “Every great movement of history comes to a point of choosing…Martin Luther King could have stopped at Birmingham or at Selma and achieved only half a victory over segregation.” This is a president whose party hired a private company to purge the Florida voting rolls of African-Americans. The irony is as rich as the words are hollow.

If he were alive today, King would have much to say about the current administration and its loose adherence to voting rights, the current war and the people, many of them people of color, fighting and dying on both sides of it. King spoke out against what he called the “triple evils” of racism, poverty and war. By following the example of the Bush Administration and simply replacing the word “Vietnam” with “Iraq” and “communism” with “terrorism,” we find King’s words remarkably relevant today. So let us concern ourselves less with what George W. Bush said about King, and more with what King can still tell us about George W. Bush.
When King first spoke out against the war in Vietnam, at the Riverside Church in New York City in April 1967, he could have been talking about America in Iraq today, with yesterday’s Communists as today’s terrorists:

“What we are submitting [our troops] to in Vietnam is not simply the brutalizing process that goes on in any war where armies face each other and seek to destroy. We are adding cynicism to the process of death, for they must know after a short period there that none of the things we claim to be fighting for are really involved.”


“This kind of positive revolution of values is out best defense against communism. War is not the answer. Communism will never be defeated by the use of atomic bombs or nuclear weapons…We must with positive action seek to remove those conditions of poverty, insecurity and injustice which are the fertile soil in which the seed of communism grows and develops.”

These are not the words George W. Bush chose to invoke under his twenty foot banner. They are not the words second-graders are obediently writing into the blanks on their dittoes. But they are the words that can save the life of King’s ideas, and our own as well.

Emily Weinstein writes the web site www.superlefty.com and contributes to The Huffington Post. She lives in Brooklyn and can be reached at [email protected]

Weinstein writes the web site www.superlefty.com and contributes to The Huffington Post.

Beverly Fishman: I Dream of Sleep

The overarching theme of I Dream of Sleep is opioid addiction, and by implication Fishman’s conglomerations of squares, hemispheres, pentagons, and triangles model the molecular structure of pharmaceutical “cures” for depression and other disorders.

James Luna: Take a Picture with a Real Indian

James Luna:e a Picture with a Real Indian is a posthumous installation at Garth Greenan Gallery of a performance/installation originally commissioned by the Whitney Museum’s downtown branch in 1991. The piece takes on issues of Native American identity and stereotypes, and explores how they land in largely non-Native spaces of viewing and writing about art.