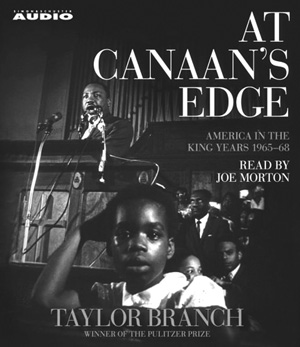 In early 1965, Dr. Martin Luther King, Jr. and the civil rights movement had reached a crossroads. Ten years of struggle had achieved lasting victories from the Montgomery Bus Boycott to the Civil Rights Act. But full citizenship for black Americans was far from assured, as evictions, beatings, lynchings, and bombings continued unabated in response to voter registration efforts in the South. With At Canaan’s Edge, the third and final volume of his America in the King Years trilogy, Taylor Branch gives an almost moment-by-moment account of King’s last frantic years. The effect is one of perilous, gathering speed: events at home and abroad spin out of control, with King’s assassination on the far horizon, but looming closer all the time.

From a moment when the possibility of a deep and permanent transformation of American society seemed within reach, At Canaan’s Edge moves relentlessly through three years of turmoil which brought the civil rights movement to a breaking point, and its leader to martyrdom. Branch emphasizes dissent among civil rights leaders and the escalating war in Vietnam as powerful forces in the crisis that engulfed the nation during these years. He shows us in action all the major figures of the day, along with portraits of a few minor figures whose experiences were emblematic of engagement in the civil rights struggle. Mostly, though, the book is an account of King’s efforts to navigate the complex American political terrain, and to articulate the future of nonviolence as a political method. Over and over, Branch’s narrative echoes back across the valley to greet us anew, as he sketches a landscape that looks soberingly familiar:

A counterinsurgency war drains resources badly needed for education, health care and anti-poverty measures at home, while U.S. tactics in the war cast a pall over its claims to stand for democracy and freedom.

In one city, a majority-black municipal union struggles to gain wages and security equal to that enjoyed by their counterparts in police, fire, and teachers’ unions.

Desperate to suppress dissent, the federal government infiltrates activist groups and spies on its own citizens using secret, illegal wiretaps.

In such a hostile climate, what’s the leader and moral center of an embattled movement to do?

Hoping to build on national sentiment that had supported his efforts in the South, King decided to attack racism in northern cities. He hoped that demonstrations against poverty, unemployment and slum conditions would prompt economic reforms, as the southern campaigns had produced the Civil Rights Act. But by 1966, marches against segregated housing in Chicago triggered white supremacist violence termed by King unequaled in Birmingham, Selma or Mississippi, forever unseating the comforting myth that racial hatred was the exclusive province of backward Southerners. The Chicago experience hinted that though white America had broadly condemned racist violence in the South, resistance to demands for justice in economics and housing conditions would prove deeply entrenched. This resistance, along with the continuing violent attacks, fueled dissent within the civil rights movement, as disenchantment with the tactic of nonviolence grew. Movement veterans questioned the strategy of relying on the federal government for protection, and challenged the Johnson administration’s commitment to the promises enshrined in civil rights legislation. After years of work on nonviolent campaigns in rural Mississippi, Stokely Carmichael would become a prominent figure in Black Power circles, embodying the split between King’s SCLC and the radical Student Nonviolent Coordinating Committee. In 1967, ghetto riots in Los Angeles, Detroit and Newark added to the public backlash against the movement.

As King wrestled with these intractable problems, he was losing the support of President Johnson, who was increasingly distracted by the war. Its costs were sapping Johnson’s expansive anti-poverty program, which had seemed like the best hope for economic justice since the New Deal. And King’s conscience was pushing him toward a public stand against the war, leading him to a confrontation with his own closest advisors. Most were against placing opposition to Vietnam at the center of the civil rights agenda, guessing correctly that it would destroy King’s relationship with Johnson and frame their civil rights program as part of a radical agenda that most Americans would find unsupportable. But King’s experience in Northern cities had convinced him that racism and poverty were inextricably tied to violence, and that the Vietnam War was a singular exhibit of this relationship. He made public his opposition to the war in an address to a gathering of religious leaders at New York’s Riverside Church in April of 1967, declaring that “America would never invest the necessary funds or energies in rehabilitation of its poor so long as adventures like Vietnam continued to draw men and skills and money like some demonic suction tube.” He denounced “the cruel irony of watching Negro and white boys kill and die together for a nation that has been unable to seat them in the same schools,” and explained the difficulty of justifying nonviolence to “desperate, rejected, angry young men” in American ghettoes in light of America’s use of war to secure its political ends in Vietnam. The principle of nonviolence was closely linked to the struggle for equal citizenship, he insisted, and maintained that we must recognize the right to self-government of the Vietnamese people as well, if America were to fulfill the revolutionary promise of its founding.

“Beyond Vietnam” provoked outrage in the White House, where a Johnson advisor announced that King had “thrown in his lot with the commies,” and from editorial pages across the country (the New York Times labeled the speech “a wasteful and self-defeating diversion into foreign affairs…fusing two public problems that are distinct and separate”). These reactions illustrate the difficulty King had throughout his life of spreading a practice that demanded supreme discipline, restraint and self-sacrifice, along with the suspension of justified cynicism. Having articulated the principle to its fullest extent in linking Vietnam to poverty and racial inequality at home, King would find few listeners ready to entertain such a threat to the status quo. Though he believed in the political effectiveness and the (related) unassailable moral authority of nonviolence, this ultimately religious worldview demanded so much of its adherents that widespread commitment did not coalesce. Religion currently dominates our national discourse, but the demands now made in its name are much less noble in comparison.

As King continued his fight, making plans for an interracial “poor people’s march” to Washington, his colleague James Lawson called from Memphis. Lawson, who was leading demonstrations in support of striking sanitation workers, convinced King that “he would find no more potent juncture of poverty and race” than in the month-old strike of 1300 black workers. King soon joined him to lead a march through Memphis’ downtown. When young gang members broke store windows and attacked a police officer, drawing beatings and tear gas in response, King grew doubtful about his ability to lead nonviolent protests. He came to see Memphis as a crucible for the future of his program, and decided that a “rehabilitation” of the strike was an essential test. He made the fateful decision to stay for a second march, planned for April 7th, 1968.

Having barreled through three years of incredible upheaval, Branch finally acts as a brakeman, halting the narrative to an excruciating crawl as the last cruel hours in Memphis unfold. From his room at the Lorraine Motel, King prepares for the second Memphis march. We watch as he meets with lawyers, gossips with his brother and calls his parents while down the street, “an escaped convict” checks into a nearby flophouse with his Remington .30-06 rifle. King’s friend Hosea Williams lectures the gang members while Jesse Jackson rehearses with a Chicago choir. Branch presses on, permitting no rest until King steps out onto the balcony to greet a carload of friends, and “stood still for once, and his sojourn on earth went blank.”

The old adage common in progressive campaigns—that if you’re drawing fire you must be doing something right—does little to ease the pain of King’s assassination, even 40 years later. Time seems instead to have deepened the tragedy, given the longevity of the injustices he took on with such righteous determination. To be sure, his death opened a void, but perhaps what’s missing now even more than his leadership is his unshakable conviction that a better way is available to all of us. “There is nothing to keep us from molding a recalcitrant status quo with bruised hands until we have fashioned it into a brotherhood,” he told the audience at Riverside Church, and, the night before his murder in Memphis, “I know, somehow, that only when it is dark enough can you see the stars.” This last speech is most famous for King’s promise to the audience—“I may not get there with you,” he told the striking workers, “But I want you to know that we will get to the Promised Land.” It is a reflection of our own convictions that today, his hopeful visions of the future are better known than his prescriptions for getting there. Moments before his dramatic exit that night in Memphis, he proposed a way forward in the humblest terms: “Let us develop a kind of dangerous unselfishness.”

Nora Connor is a writer based in Brooklyn.

Brooklyn Eviction Defense (BED) is an autonomous organization of tenants fighting against the eviction machine through direct action and collective organizing. BED came out of a coalition of tenant unions in the summer of 2020, in response to the looming avalanche of evictions created by the combination of federal and state eviction moratoriums and a refusal to cancel rent. Our work takes many forms including blockades, stoop watches, tenant association organizing, tenant support, preventive targeted outreach, data work, propaganda and political education.

A Response to Christina Wilkinson

Thank you for taking the time and care to write such a detailed response to my article about Mr. Westergaard. Historical accuracy is of the utmost importance to me, and I value your perspective as a local historian.

“My grass-stained knees pledge allegiance/to a country that belongs to no one/I love,” writes Hafizah Geter in the title poem of Un-American, a debut that interrogates citizenship, statehood, police brutality, and national identity.

Through the School of Good Citizenship, LigoranoReese have created compelling collaborations that activate dialogues related to previous subjects that they’ve tackled such as the meaning of democracy, the nature of the economy, and the contestation of truth.