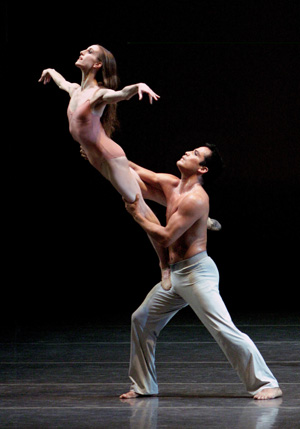 Wendy Whelan and Jock Soto in Christopher Wheeldon’s After the Rain. Photo by Paul Kolnik.

A recent diablog on Artsjournal.com centered on whether New York is the dance capital of the world. It raised as many questions as it answered, but it underscored what we jaded New Yorkers can take for granted—the considerable wealth of all kinds of dance, from large companies to open class schools. And if there is a common language among the different types of dance—either native to New York, or among the vast variety of companies that tour here—it is ballet, whether interpreted as a movement vocabulary, relied upon by modern dancers to build fundamentals, or as something to revolt against.

Two companies dominate the ballet scene in New York: New York City Ballet and American Ballet Theatre, which bills itself as “America’s national ballet company.” Currently the most thrilling large company in New York (and quite possibly America, true to its slogan), ABT mounts two seasons each year—one consisting largely of scenery-laden fairy tales and classical repertory, and another featuring more contemporary, smaller-scale works. Under Kevin McKenzie’s direction, ABT’s all-star approach to company building virtually ensures top-rate casts; its dancers hail from all over the world and are the closest dance has to superheroes. It has a pre-professional school and a studio company for younger dancers, but frequently hires stars from international companies who pop in for a few weeks a year, such as Julio Bocca, who takes a break from his own artistic projects in Argentina.

The number and quality of male dancers at ABT is embarrassingly rich, with the likes of David Hallberg in second casts behind Marcelo Gomes. Both men have not just the height and bearing for princely roles, they have extreme flexibility in their backs and legs, and beautifully finished feet. The women, no slouches either, range from ethereal Julie Kent to bionic Gillian Murphy, whose athleticism and perfect sense of balance allow her to dazzle audiences with many-revolution turns limited only by musical rhythm.

But the quality of repertory has varied in recent years; fall 2005 at City Center struck a good balance, with the revived masterpieces Rodeo (Agnes de Mille), The Green Table (Kurt Jooss), and Dark Elegies (Antony Tudor). They also performed Twyla Tharp’s In the Upper Room, and while it felt at times that the wheels would fall off this hugely demanding, frenetic tour de force, the joy and camaraderie among the dancers leapt off the stage. Ethan Stiefel literally vibrated with adrenaline, and his fellow dancers reflected his contagious enthusiasm. Commissions should be a staple but have proven risky both artistically and financially. In their last spring season at the Met, they found a critical and popular hit in Frederick Ashton’s Sylvia, after stumbling with full-length commissioned gambles in previous years, most egregiously, David Parsons’ The Pied Piper and Hereafter, a double bill by Natalie Weir and Stanton Welch. This coming spring brings James Kudelka’s full-length Cinderella and a revival of Kenneth MacMillan’s Manon, both relatively conservative choices.


New York City Ballet faces the opposite situation—plentiful repertory, but inconsistent technique and a dearth of princely men. It’s been 23 years since the death of George Balanchine, who created a deep, rich vein of dances that the company continually mines. Jerome Robbins’ contributions add a jazzy American snap, and now Christopher Wheeldon, the prodigious resident choreographer, is adding big and small pieces of repertory-worthy quality while creating commissions for other companies, notably an appealing, if safe, SwanLake for the Pennsylvania Ballet. Artistic director Peter Martins continues to be prolific choreographically, although his busy, overly difficult work often makes his dancers look panicky and inept. (A recent exception is Ashley Bouder, a sparkling dynamo who’s sharp enough to rise above Martin’s breakneck pacing.)

Despite its rich repertory, the company keeps seeking new work. Through the choreographic initiative called The Diamond Project, this spring NYCB will present works by seven men, including the Bolshoi’s Alexei Ratmansky, Aterballetto’s Mauro Bigonzetti, Jorma Elo of Boston Ballet, and Jean-Pierre Bonnefoux, North Carolina Dance Theatre. City Ballet recently announced the appointment of MacArthur fellow Bright Sheng as composer in residence. He will compose scores for a couple of dances, conduct, and more.

Balanchine’s adoration of women ranged from his legendary personal affairs to his entire oeuvre, which orbits around the ballerina. Fittingly, the women are mostly technically sound, and some, like Wendy Whelan, are luminous. But the men almost seem like they’re in a secondary company—they lack power, finish, and strength. Basic benchmark moves, such as a double tour en l’air, baffle some of the principal men. With the exception of Damian Woetzel, the most egregious missing ingredient seems to be confidence, made worse by the retirements of stalwarts Jock Soto and Peter Boal. It is ironic, or perhaps tragic on some level, that Martins—an iconic, stunningly handsome Apollo in his heyday—somehow cannot foster a similar command from his men dancers. He has made some patches in the last few years by hiring imported stars like Joaquin de Luz (who was a soloist at ABT, where he was very good but stood in line for parts behind the superlative Herman Cornejo) and Robert Tewsley, who departed after (or as a result of) portraying Balanchine in Musagète, Boris Eifman’s garish bio-ballet.

City Ballet is often pilloried by critics, in part because it will never be what it once was. Those who had the advantage of regularly attending performances during Balanchine’s lifetime are familiar first-hand with the effects of his pedagogy, and it’s understandable if they are among the most critical. Most of the company’s current principals never worked with Balanchine; some weren’t even born when he died in 1983. But they have worked with Martins, and though they have mastered his affectations—a coy turned-in leg and rococo splayed hand—they usually cannot meet the too-difficult expectations he embeds knowingly or subconsciously in his choreography. I have a recurring dream of seeing ABT’s dancers in NYCB’s repertory, a folly teased by recent guest appearances at City Ballet by ABT’s Angel Corella and Julio Bocca, who brought rare masculine brio to State Theater. But I am brought back to reality through frustratingly dull performances by the likes of NYCB’s Nilas Martins or Charles Askegard, who seem to serve as props for their more glamorous female counterparts.

It’s one thing for a critic to pick and choose, but it’s not quite as simple for the paying public. The ticket prices for Met orchestra seats are comparable to that of Broadway and opera, immediately precluding a big segment of the dance community from regular attendance. ABT participates in Evening Stars, the free dance series in the fall, and Fall for Dance, the $10-a-ticket marathon at City Center, but those are drops in a bucket. And there’s always the nosebleed section at the Met, from which it’s possible to hop down to empty, closer seats.

But some dancers from these two companies are pursuing their own projects on a smaller scale. Peter Boal, before moving west to run Pacific Northwest Ballet, put together regular seasons at the Joyce Theater featuring a variety of choreographers and some fellow company members. Benjamin Millepied, an NYCB principal, is doing a similar thing, taking it one step further by inviting as guests ABT’s Gillian Murphy and Ethan Stiefel. Edwaard Liang, a soloist with NYCB, is making a name for himself as a choreographer, creating works for Boal and the newly transplanted Cedar Lake Ensemble, a mid-sized company.

Two February events highlight attempts to popularize ballet. Stars of the 21st Century, in just one performance at the State Theater, brings together principals from eight American and international companies to perform a variety of traditional and contemporary short ballets. A more ambitious run of four City Center performances is slated for the modestly monikered Kings of Dance, which is banking on the machismo and pyrotechnics of Corella, Stiefel, and stars from the U.K.’s Royal Ballet and the Bolshoi. While traditionalists may sneer at these attention-grabbing events, they cut to the chase—ballet can be wild fun.

Susan Yung writes freelance about dance and the arts.

Tales of Hopper: The Additive Adaptation from Painting to Dance