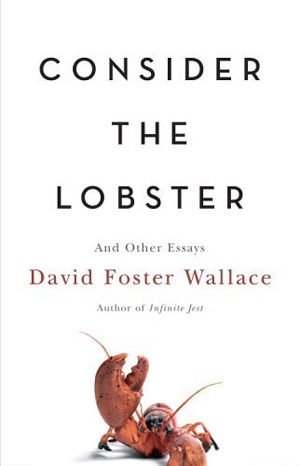 There is pretty much nothing in common between the porn starlet Stephanie Swift, who earned the Best Actress (Video) distinction at the 1998 Adult Video News Awards, and the Maine Lobster Festival, to which seafood enthusiasts make an annual pilgrimage. For that matter, there is no discernible connection between Joseph Frank’s exhaustive biography of Fyodor Dostoyevsky and The John Ziegler Show, a conservative talk radio program that airs in Southern California, except that both of them—along with pornographers and lobsters and an impressive array of other phenomena—come under the scrutiny of David Foster Wallace in his thoroughly engaging new non-fiction collection, Consider the Lobster.

Ever since the publication of Infinite Jest—a colossal novel that is more often referenced than read—Wallace has been branded a postmodernist extraordinaire and the successor to Thomas Pynchon’s mantle as the most important and relevant novelist writing in America today. It is unclear what the distinction means, if anything, since postmodernism is a notoriously slippery subject whose study one is encouraged to leave off like so many other unhealthy undergraduate habits. However, in Consider the Lobster (which gathers essays published in venues such as the New Yorker and Atlantic Monthly), as Wallace effortlessly shifts his intellectual gears from pornography to John Updike to terrorism to Franz Kafka to tennis, some coherent vision of the postmodern project begins to take hold: the willingness to level the field between high and low culture—if such a division still exists—while searching for what truly makes us American.

It is a testament to Wallace’s acuity that the most compelling essay in the collection, “Authority and American Usage,” is a fifty-plus page treatise on grammar. In reviewing Bryan Garner’s Dictionary of Modern American Usage, Wallace traces the history of American linguistics and patiently delineates the relationship between politics and language, without ever belaboring the point, to show how the language we speak informs the things we believe, and vice versa. There are, of course, his well-known trademarks: endless footnotes, dense vocabulary, digressions about family history, but these never detract from the buoyancy of the essay. His assertion that “the self-serving hypocrisy that informs [Politically Correct English] tends to infect and undermine the US Left’s rhetoric in almost every debate over social policy” is especially worth considering in light of the well-documented crisis of ideas within the Democratic Party today.

Nor does “Big Red Son,” Wallace’s venture into pornography, disappoint—unless, of course, one is looking for more than just words. The awards ceremony, set in Las Vegas, is gaudy and depressing, but Wallace is captivated by colorful characters like the producer Max Hardcore, a trade journalist who goes by the nom du travail Dick Filth, and a B-starlet who can adjust the size of her artificial breasts through valves that leak fluid under her armpits. At one point Max Hardcore proudly displays a page (reproduced faithfully by Wallace) on which a porn startlet has scrawled “I’m a little fuckhole” with a Magic Marker inserted into her anus; the sadness of that scene, and so many others, would be overwhelming if Wallace did not have the ability to make it all seem so unabashedly human.

Another must-read is “Up, Simba,” which Wallace wrote as he followed John McCain during the pugnacious ’00 Republican primary in South Carolina, which came a week after McCain’s surprising defeat of George W. Bush in the New Hampshire opener. Through an exploration of McCain’s imprisonment in the infamous Hanoi Hilton prison during the Vietnam War, Wallace paints a nuanced picture of that rarest of political species: a man who may actually believe his own talking points. One scene has Wallace listening to a dissection of negative campaign ads that comes courtesy of a group of cameramen and audio technicians; laced with references to The Godfather, it is easily more insightful than anything that James Carville or Robert Novak has ever said. McCain would lose significant ground after “going negative” in South Carolina, just as the cameramen had predicted, but Wallace remains impressed by the candidate’s earnest and apparently heartfelt desire to “make us hear clichés as more than just clichés and starts us trying to think about what terms like ‘service’ and ‘sacrifice’ and ‘honor’ might actually refer to.”

There are also essays on John Updike, Fyodor Dostoyevsky, the washed-up tennis sensation Tracy Austin and the humor of Franz Kafka. The analysis of precisely what makes Kafka funny is notably insightful, especially when Wallace surmises on what Americans want in their humor: that is, not the “grotesque, gorgeous, and thoroughly modern complexity” that was the well-trodden terrain of the brooding Czech, but “jokes as entertainment and entertainment as reassurance”—reassurance probably being the last thing one can hope to find in “The Metamorphosis” or “In the Penal Colony.”


Indeed, not a single stinker lurks in Consider the Lobster. Wallace may be a postmodernist indeed, but in the end he is much more than that—an author imminently worth reading because of what he reveals about our own culture in all its dizzying variety.

Alexander Nazaryan is a writer and teacher living in Brooklyn.

In Search of The Third Bird: Exemplary Essays from The Proceedings of ESTAR(SER) 2001–2021

In Search may be a game, but it is undoubtedly a serious one.

These writings grasp the most seemingly insignificant detail and weave an entire text around it. We might direct our attention to just plain objects, knitting texts about them, concentrating our focus upon them, or simply collecting them for no particular reason.