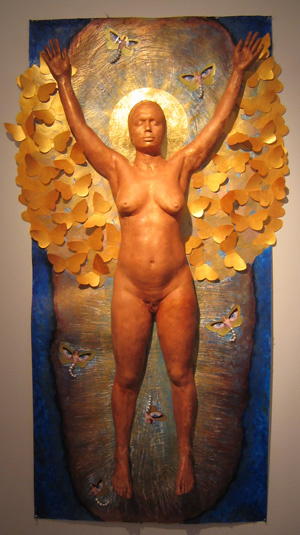 Much ink has been spilled and many voices have become hoarse in recent discussions on the current state of “feminist art,” and intentionally or not, Transfigurations of Queen Butterfly places Yuliya Lanina firmly within this contentious dialogue. Composed of five large, mostly wall-mounted pieces, Lanina’s recent show combines elements of cast body parts, fabric constructions, and painting and collage on paper into a narrative cycle, a kind of feminine Stations of the Cross.

In “Flower” (2005), gestation is represented as a fetal positioned figure in a flower-padded pocket, the only freestanding sculptural piece in the show. “Birth” (2005) depicts a grasping torso with a skein of vascular red hair emerging from a fanged vaginal shape. Consciousness appears like the page from an adolescent girl’s diary, growing breasts, lips, and feet surfacing prominently through holes in the script covered paper in “Emergence” (2005). “Contemplation” (2005) depicts awareness as a flowery field, a realization of erotic potential and reproductive fecundity with golden legs held apart in an inviting gesture. Enlightenment completes the cycle in “Liberation” (2005), in which a near Baroque angel stands erect with upheld arms, a halo and wings of golden butterflies on a ground of deep ultra-blue.

Transfigurations of Queen Butterfly seems a mélange of several tendencies of “feminist art” that have evolved over the last thirty years. The body casts reflect not only the pop influence of George Segal or the socially engaged art of John Ahearn, but by using herself as the model Lanina commingles aspects of performance, and by appearing along side this highly detailed rendition of her own nude body, she creates an effigy of vulnerability. The broad use of silk flowers, metallic gold, pastel colors, and pattern brings an amplified sense of the decorative that in some cases approaches the extravagant. These glittering materials have been used in illuminated manuscripts and sacred icons for their spiritual implications, and might relate to the artists Russian heritage. The use of classic forms like the butterfly—a symbol of transformation and immorality that is able to regenerate life out of death and corruption—and the vaginal shaped mendorla—an almond shaped variant of the halo which surrounds the body symbolizing the power of spirituality—links the images to the “Great Goddess” cult, a contrivance of the essentialism of the first generation of feminist artists. With a swarm of tiny butterflies hanging from the ceiling and a scattering of flower petals over the floor, an environment somewhere between a movie set and the ritual sites rumored to exist deep within the Amazon jungle for lepidopteristic worship are evoked.

Today’s art world is populated by a vast majority of both men and women who would identify themselves as feminists, yet there is a cadre of young female artist who shrink at the mere mention of the word, and seem intent on exploiting every nasty girl cliché just to get a rise out of those upholding the orthodoxy. Is this a generational reaction against their elders, or a genuine disagreement with the goals and ideals of the movement? Perhaps one of the most appealing prospects of our new sense of hyper awareness is the potential for subversion through subtle satire and critique through parody. Yet this requires a thorough knowledge of history and precedents. With works by artists like Ana Mendieta, Hannah Wilke, Eva Hesse, and Carolee Schneemann having established the canon, Lanina is free to use or abuse these sources in creative and critical ways. Whereas Ana Mendieta’s voids were transitory and organic, Lanina’s “Birth” can be “in your face.” If the colors of a Hesse were subdued and industrial, Lanina’s chromatic sensibility might be garish and gimcrack. The struggle to balance historical precedents and current art world politics provides Lanina with ample material to develop her own feminist aesthetic as an ongoing dialogue.

Hoda Barakat’s Voices of the Lost

Ultimately, Voices of the Lost belongs with the most exemplary fiction of our contemporary diasporas, striving to match the new tragedy with a new form.

Adam Pendleton: Who is Queen?

Stand still and direct your gaze three stories up into the MoMA’s Marron Family Atrium and prepare to be arrested by the motif of black-and-white in Adam Pendleton’s Who is Queen? The work, monumental in scale, with its three soaring scaffold sculptures, taking up the height of the 60-foot atrium, is his most “autobiographical” to date and considers history not as fixed or static, but rather continuous, alive, and ever-evolving in real time.