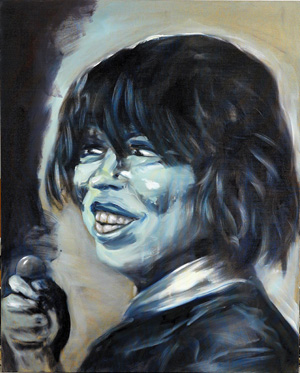 The curatorial proposition for Ten New Paintings at Parker’s Box notes that the selection of the artists, not the work, was the basis for inclusion in this survey of contemporary painting. The departure point for each artist appears to be figuration, and the canvases arrive at a range of aesthetic and conceptual possibilities. Though each painting is quite different, there is a common thread of expectations defied. From the joyous phenomenology of Andrew James glittery, liquid pools in “Indian Summer Again”(2006) to Stefan Sehler’s exquisite gold-enamel masks over a luminescent abstract ground in “Gold Foilage” (2006), the resulting show is a flat-footed celebration of the medium. (Flat-footed, as in an intentional awkwardness to the handling of the medium best exemplified by Philip Guston’s return to figurative abstraction—his thick, deliberate marks forced critics to talk about things like ‘the speed’ of his paint as they tried to understand his aesthetic decisions.)

There are several canvases that consciously edge into bad painting as a rejection of facility, including passages of James’s painting that revel in the effects of the paint or the explosive density of Matt Blackwell’s dark canvas “Promised Land”(1993 –2005). It isn’t a question of grotesque subjects; here they are often whimsical, fantastic, and banal. Jason Glasser’s painting on auto glass of a red comb gently plowing the landscape, “Le Peigne (The Comb)” (2005) is a comic interpretation of Romanticism, while Blackwell’s depicts a bear surrounded by expressive marks that perceptually shift from busy, colorful gestures to small portraits. By turns, each work necessitates an evaluation of what qualifies a painting as “good”; the subjects are not the difficulty here, but how each artist represents them.

Abstraction remains a primary concern for a majority of the artists. Sehler’s gold painting draws leaves and Rorschach patterns out of the swirling green abstraction, suggesting the tendency to impose the figure into abstraction with which Pollock continually wrestled. In Sally Ross’s small abstraction “Cluster Red and Green” (2005) the observations of flocks of birds, as opposed to the self-referential nature of pure abstraction inform the twisting forms.

Joyce Pensato’s large canvas “Marsupilami” (2005-6) done in monochrome black and white is the most overtly Abstract Expressionist in the show. The black lines splattered across the white ground are strongly reminiscent of Franz Klein. Yet the formal similarity ends there as Pensato gives us a rather brutal depiction of a childlike teddy bear through the language of Abstract Expressionism.

If the discourse of Modernist painting has been banished to the netherworld of art criticism, it does not exclude the possibility of abstraction. Rather it welcomes the return of the external references: imagination, memory, and history. Gregory Forstner’s boldly expressionistic painting, “Untitled” (2005), of a smiling woman, seems almost out of time. The portrait, an enlarged detail of a historical work, drags the familiar traits of Modernism, the visible mark and the repudiation of illusion, completely out of context into the present. Forstner suggests that all paintings, without the authority of historical context to fix their meaning, are new and re-open to interpretation. In relation to the rest of the show it initially seems out of place, owing more to Gerhard Richter’s use of painting to examine representation than the directness of James’s or Blackwell’s expressionism. Forstner’s painting is the most conceptual work in the show as its initial expressive qualities are a result of his framing process, though that does not negate the artist’s hand. He retains an immediacy that Richter’s carefully planned canvases seldom display.

Conversely, Steven Brower’s painting “Untitled (NH Studio)” (2005) comes across as mannered as a Rackstraw Downs landscape. It is perhaps the most traditional painting in the show, earnestly trying to represent the architecture of the artist’s studio. In the context of the surrounding paintings it seems to allude to the almost myopic intensity of the act of painting. Brower’s, Forstner’s, and to a lesser degree, Herve Di Rosa’s paintings stand in marked contrast to the stylistic and phenomenological play of the more abstract work in the show.

As the title of show hints, trying to make painting “new” again is something that all of the artists are struggling with; there simply isn’t a painting in the show that is easy to digest. Herve Di Rosa’s painting “Graffiti”(2005) is a de Chirico- inspired vision of Miami that flattens the space with a kind of brutal geometry, while Gregory Curry’s floating, intestinal organ drifts through a landscape like a metaphor for abstraction lost in the wilderness of post-modernity. All of the paintings in the show pose particular challenges to understanding any clear condition of painting, which would be a hopeless and futile act anyway. Resisting easy accessibility by not relying on formal or technical quality to appease the viewer, the work here does offer often strange, and sideways approaches to “seeing” painting. These ten different paintings are a welcome respite from the recent dominance of ‘connoisseurship’ in contemporary figurative painting where quality is defined by how well the work aligns with traditional notions of painterly touch, skill, and talent. These works risk the familiar for territory that is less easily recognizable as beautiful—yet.