Sculpture into Architecture
The Metropolitan Museum of Art 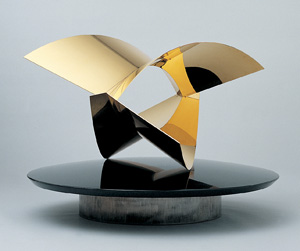 The unusual and illuminating Santiago Calatrava exhibit at the Met, Sculpture into Architecture, offers a lively array of work by the contemporary Spanish architect who is also a lyrical draftsman and a sculptor. Calatrava’s sculpture and architecture are sometimes connected by a nearly one-to-one formal correlation and always by a distinct sensibility. Connections are still more apparent in the drawings; his skillful transformations from one form of expression to another reveal differences in scale, function, materials, and intent.

Calatrava uses his drawings to suggest and, later, develop the designs for his buildings, but we also see, throughout all areas of his work, a no-apologies-offered allegiance to organic form and living beings. Unlike his predecessor Eero Saarinen, who rejected the natural associations of his fluid, birdlike TWA terminal at Kennedy Airport, Calatrava welcomes the analogy to living creatures, which leaves him open to the charge of sentimentality. His watercolor drawings of human and animal forms manifest this affinity in a somewhat more representational mode, no less rhythmic and fluid.

Le Corbusier said that “It is in the practice of the plastic arts—‘pure creation’—that I have found the stimulus for…my architecture…Drawings, paintings, sculptures, books, houses and town plans stem in my case from a single creative source dedicated to the various manifestations of the visual phenomenon.” Yet anyone seeking a direct link between most of Le Corbusier’s sculptures, paintings, or collages and his architecture will likely be disappointed. But the process of creating his semi-figurative sculptures—the balancing of mass, rhythms, and movements in three-dimensional space—exercises many of the same faculties used to design buildings. Similar arguments can be made for his paintings: the monumental women, for example, suggest the solidity of the built environment as well as the organic forms of living creatures. Corbusier’s exquisitely proportioned buildings were designed from the start with their inhabitants in mind: his system of proportions, based on the human form and manifested beautifully in his architecture, has at its core an understanding that human beings will engage this space.

Le Corbusier’s system for valuing and addressing the human presence was absent from most modernist building. When I first arrived in New York in the late sixties, I worked for years in some of the mediocre Bauhaus derivatives of midtown Manhattan, the stripped-down glass and steel boxes that ultimately gave modernist architecture a bad name: great looking, even magical, at night, when viewed in a cluster from the outside, but anonymous and alienating, even hostile, during the day. Ironically, the swooping diagonals of Calatrava’s buildings and bridges play out nicely against the simple verticals and horizontals of modernist, or modernist-derived, cityscapes. The contrast strengthens them.

There is no denying that Calatrava’s delicate, graceful architecture outshines his sculpture and his drawing, even in the scale models. The curving granite and marble sculptures, though sensuous and rhythmic, derive from Brancusi and Noguchi and probably would not have made it into the Met without their relationship to the creative process that ultimately produces Calatrava’s architectural visions. But the entrancing thing about the show is seeing the way it all threads together. Engineer, architect, sculptor, painter, draftsman—Calatrava is attempting to do it all.

The analogy to Brancusi’s “Bird in Space” made by the exhibition and the juxtaposition with the sculpture in an adjoining gallery can be taken only so far. Significantly, Brancusi carved his forms directly, which gives his sculpture a more organic presence than Calatrava’s “Fruit” and “Untitled,” just inside the door. Brancusi’s pedestal, designed by the master himself is an intrinsic part of the sculpture and works beautifully, organically, with the birdlike form above it, whereas by comparison the cylindrical pedestals supporting Calatrava’s work look mechanical and awkward. But the most striking difference is the clear relationship in Calatrava’s work to human, rather than avian, anatomy—suggesting a deeper connection to the Georgia O’Keefe paintings in another nearby gallery. The formal analogies here are truly exciting: position yourself in front of O’Keefe’s “Grey Line with Lavender Yellow,” with its open round forms both botanical and anatomical. The contour as well as the sensuous vertical furrow, so strongly suggestive of female anatomy, immediately brings to mind Calatrava’s slender granite sculptures. O’Keefe’s abstracted and simplified enlargements of weathered and bleached animal bones from the Southwest immediately conjure associations with Calatrava’s delicate white architectural apparitions. O’Keefe magnified and simplified her animal bones, sometimes placing them against mountainous backdrops that look small in comparison while Calatrava magnifies and simplifies still further—much further—achieving a poetic architectural vision that, like O’Keefe’s paintings, evokes not just physical locations but emotional responses.

On some level, we undoubtedly recognize ourselves, as living creatures, in Calatrava’s work: how could we not? His wonderfully fluid and varied watercolor and graphite sketchbook drawings make it abundantly clear that his sources are frequently anatomical. His studies of human eyes are progressively simplified and finally vastly enlarged to create the basic forms of the planetarium building of his City of Arts and Sciences in his native town of Valencia, Spain. While there are vast differences in scale, consistent reduction of anatomical form (such as the arc of the eyelid) to geometric components, and the altered vantage point of the viewer, the analogy from obviousness is prevented.

Other projects in the exhibit evolve from or bring to mind the human spine (such as the Turning Torso tower), rib cage (parts of the World Trade Center Transit Hub, as viewed through the display film), hands, legs, heads, and other aspects of human or avian anatomy. The Tenerife Concert Hall, in the Canary Islands, takes its essential forms from the gold-plated brass and granite sculpture “Bird I,” as does the Lyon Airport Railway Station in Lyon, France; a winged canopy that opens and closes similarly dominates the Milwaukee Art Museum.

Most of Calatrava’s curving forms are created from straight lines, such as his “Waves” of undulating bronze rods developed in La Rioja Bodegas Ysios Winery in La Guardia, Spain. His affinity to Antoni Gaudi, nineteenth-century Spanish master of organic, undulating form, has been mentioned endlessly. But these wavelike forms, as well as the Calatrava’s element of fantasy, are also related to the early work of SITE, the New York City-based art and architecture firm (see, for example, the 1972 “Wooden Waves” project for Binghamton, New York). Calatrava’s influences and inspirations are numerous, and the results of his fascinating synthesis and evolution of form are magical.