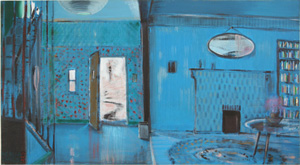 1985 was a bad time for painters of a certain sensibility. One had, on one side, the rhetorical bombast and dubious values of neo-expressionism, and on the other, something much smarter but distressingly cold called Neo-Geo. To top it off, some lunatic took a knife and a liter of sulfuric acid to Rembrandt’s “Danae” in The Hermitage. What was a humanist to do? Merlin James’ survey of paintings at Sikkema Jenkins & Co. describes one escape route from the postmodern impasse.

For twenty years James has made small, stubbornly anti-esthetic easel paintings that strive for meaning and integrity as much as they threaten our understanding of what those qualities look like. Aping the Sunday painter, James renders banal subjects in a vocabulary of palette-knife swipes, daubs of bright acrylic paint, sketchy outlines, and ochre washes that call to mind the most jarring and unpredictable results of amateur painting. Their fastidiously aggressive facture—the thin stretchers, mottled acrylic surfaces, lumpy embedded debris, rough canvasses, and occasional jagged perforations—grounds the work in the materiality of painting as much as it signals the inability of a formalist vocabulary to fully account for James’ project.

The tone of the enterprise is elegiac and often morose. It’s also laced with evocations of an embattled, occult legacy of painting, a resistance movement to the juggernaut of received art history. “Flower Piece”(2001) is a small squarish painting with a crudely painted bouquet floating against a dark, textured ground and casually painted primary color borders. It nods towards George Braque’s murky, inscrutable post-cubist work as well as Mondrian’s alleged penchant for painting still lives in private while publicly espousing pure plasticism. “Old Building on a Hill” (1999-2003) is composed of equal parts John Constable highlights and Max Ernst frottage. “Sex” (2004) strips the luster off a cropped porn image, rendering hands, penis, vagina, and breasts in thin, muddy greys that emphasize the leaden materiality of paint and flesh against the cool disembodiment of the photograph.

The closest James comes to exuberance is “French Window” (1996), a straightforward view through a yard to the side of a house, where two purple silhouettes hover inside the titular window. Two trees in the foreground are hinted at by bright, fluid streaks of color moving over a light grey ground. The particularity of the scene—the way its composition and presentation veers eccentrically away from the standardized model for plein air painting—opens up a compelling, provisional space for the work in which questions of intentionality are suspended without being ignored.

James’s case dramatizes the difficulty of painting in a way that affirms the medium’s value without turning its back on history. He suggests that the war against vacuity can only be fought one painting at a time. When he’s successful, the weight of his critically self-conscious position dissolves in a revelatory moment, and the most unlikely of objects becomes simple and profound. When he’s not, a viewer is left with too little in the way of aesthetic interest to justify the time spent deciphering the work. It’s dismaying how severe James’s position appears in a painting culture where engagement and criticality sound like such outmoded terms, obstinately somber in a carefree time. In 2006 he looks like the only soldier left on a battlefield; we’d like to think it’s because the war is almost over, not that everyone else walked away from the fight. —Roger White

Presented in nine galleries on the second floor of the new wing of the Kunstmuseum Basel, this large display encompasses 120 works, including paintings and works on paper by Rembrandt. It is a visually effective presentation of Holland’s 17th-century colonialist cultural encounters. The “Orient” in this exhibition encompasses the territories on the Dutch trade routes, the Mediterranean sites controlled by the Ottoman Empire, as well as Persia, India, and the Far East.