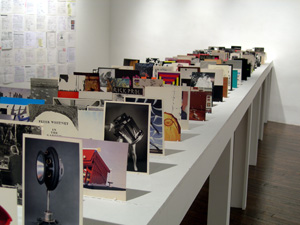 The artworld is a complex apparatus in which artwork is but a single component. Spaces that show it, dealers that sell it, and critics that gauge and interpret it play as essential a role in establishing success and writing history. This exhibition in many ways is about those systems that are simultaneously ancillary to and crucially embedded in the experience of looking at art. There is no artwork per se on view. Instead we are presented with printed materials related to exhibitions spanning the past thirty years, collected and annotated by critic Kim Levin, and organized for presentation here by artist John Salvest.

The front gallery presents “Itineraries, 1995–2005,” hundreds of announcement cards, hung perpendicular to the wall so that both sides can be read, on which Levin planned daily gallery-going routes. These itineraries are marked with her personalized system of notation, involving color coding, arrows, stars, words boxed with solid and dotted lines, words crossed out, and instructions such as “omit.” Her exact code is tough to crack, but presumably was designed to manage The Village Voice “Voice Choices” listings Levin edited for more than twenty years. It is amusing to discover Levin’s personal notes to herself (grocery lists, appointment reminders) peppered throughout, as well as her tendencies to sometimes invent nicknames (the Whitney’s branch at Philip Morris is repeatedly referred to as the “Cig. Whit.”). Circling the room chronologically over a decade, changes in the New York art world (read Manhattan) are roughly tracked. A handful of gallery names disappear and countless new ones materialize. Her lists are organized by neighborhood for obvious practical reasons, thereby providing a clear view the often-discussed downtown geographical shift. In ’95, Soho still dominates. Chelsea makes its first appearance in ’96 with a scant few names, and steadily grows in size until it reigns supreme.

Real estate is something of an obsession for New Yorkers, and its effect on the art scene an insider fascination. Migrations from one neighborhood to another are synonymous with the history of scenes centered around both artists and dealers. This is again apparent in the rear gallery, which contains a long table on which “Downtown Announcements, 1975–1991” are arranged. These announcement cards are the only materials in the show not annotated by Levin, although many contain writing, having been mailed to Levin’s home. These cards represent the East Village and early Soho scenes, with examples from defunct spaces like Limner Gallery, Nature Morte, and Semaphore Gallery. The crises in the artistic community sparked by AIDS and right-wing conservancy are captured by Silence = Death logos, images poking fun of Ron and Nancy, and the presence of names of artists lost to AIDS. Casualties of other causes, like Hannah Wilke and Steven Parrino, act as reminders that losses are unremitting.

Also in the back gallery are “Notes 1, 1995–2004” on additional announcement cards, and “Notes 2, 1995–2004,” written on press releases and checklists. These materials contain Levin’s notations and occasional sketches made in response to the shows for which they were produced. Be forewarned, if you go view these to try and discover what Levin really thought of your show, you will be disappointed. Her jotted notations are mostly descriptions, seemingly designed to trigger her memory when sitting down to write. However, if you comb carefully, there are fragments from which her critical and interpretive role can be gleaned. On E.V. Day’s work she writes, “skill talent clever;” on the collaborative team Chris Hanson and Hendrika Sonnenberg, she observes, “all about the space between the 2 of them: interaction agreement.” And a 2001 exhibition of John Currin’s work (he is represented more than once in this collection) inspires the bittersweet words, “the most debased despised silly traditional retardaire images & techniques—the best taboo: bad taste.”

In phrases like these, we get a sense of Levin’s honed ability to sum up her opinions concisely. Her “Voice Choices” were often as miniscule as 50 words, yet contain critical kernels. They serve as a reminder of the unfortunate reality that for New York viewers, the enormous volume of work to process often allows us to retain only the mental equivalent of sound bites. For those who want to sink their teeth into Levin’s meatier output, copies of some of her publications displayed in a sealed vitrine by the gallery’s entrance are more easily accessed at the reception desk. Also available for visitors is a complementary packet of selected “Voice Choices” and reviews by Levin. These cull out her position as a thoughtful and sensitive critic, especially attuned to the work of women artists, who responds well to risk taking.

This exhibition has a strong undercurrent of nostalgia for the lost days, reinforced by its presentation in one of the few Soho spaces that still remain. Due to its retrospective and historicizing nature, it is being promoted in conjunction with “The Downtown Show: The New York Art Scene, 1974–1984” at NYU’s Grey Art Gallery and Fales Library. This latter exhibition is an exciting survey, capturing the era’s art, spaces, personalities and culture in a dynamic explosion. By comparison, Levin’s presentation is a domain of the critical observance, heance naturally pertains more to documentation than sensory immersion. Nevertheless, it is a engaging way to meditate on aspects of art presentation and reception. Depending upon your own history in New York, it can provide a pleasurable reminder of shows seen and forgotten, and/or an entry point into eras you may not have personally experienced. But most importantly, this show serves as an examination of devoted and sustained looking. For artists, curators, dealers, collectors and critics, it is a truly generous asset.