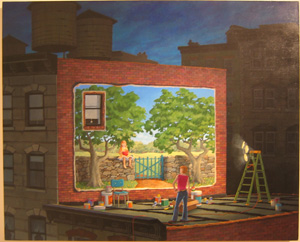 Domestic bliss—an all enveloping cushion of comfort, security, and household good taste rendered within the pages of Martha Stuart Living or Good Housekeeping—is a pictorial theme that unites many of the paintings in K.K. Kozik’s latest exhibition, Shelter. Also present is a mood of aloofness, a state in which, though the characters are present in urban settings, they exist in their own private reality, a realm somehow isolated from the threats, grime, and worries of modern city life. A creeping sense of paranoia and an unprecedented climate of vulnerability have struck New York since 9/11. We also face the voracious real estate development that has displaced swaths of our local community. These attacks on the stability of our homes and home lives have rendered the thoughts of our former mundane lives a fantasy, a golden past. In this environment it’s little wonder that Kozik’s depictions of residential solace resonate with viewers.

“Ghosts” (2005) looks like a real estate agent’s dream scenario. A lounging couple in pajamas brackets the scene, reading the Sunday papers and sipping coffee. Behind them, through massive windows, stand the uppermost portions of neo-Gothic skyscrapers. Outside, snowflakes pile up and blankets of mist shroud the view in pearly shades of grey. Luxurious accessories like a polar bear skin rug on the floor, and a “Rothko” painting on a maroon wall signify a world isolated not only by distance and elevation, but by economics and privilege. For those of us who can only look up and wonder about what life is like above the fortieth floor, this depiction of warm candy colored comfort counter-posed against the chill of an urban winter illuminates a vision that is as fantastic as any surrealist’s conjuring. “Au Plain Air” (2005) pictures a Brooklyn skyline at dusk; floodlights and studio equipment clutter the roof of a building. On an adjoining building hangs a canvas so large that it nearly covers the entire wall. It depicts a redheaded girl sitting on a stone wall surrounded by fields and trees. A window is exposed through a hole cut in the canvas. In the foreground, back to the viewer, stands the artist contemplating the work.

Kozik constructs her tableaus with the dramatic eye of a set designer. Perspective, scale, lighting, and color are all used to evoke sensations that amplify the ambience of the narratives. The small scale of the figures in relationship to the whole, and their placement, like actors on a stage, creates a distance between the viewer and the subject and keeps the observer removed, a member of an audience rather than a player. Though this might provide the artist with a reliable framework on which to build her plot lines, it does limit the kinds of pictorial incidents and perceptual frameworks available to the viewer and tends to limit readings to illustrations of personal parables.

Undoubtedly Kozik is technically proficient and able to paint interior and exterior architectural elements convincingly. In recent years the richness of her colors has provided a wonderfully believable space for her landscapes and interiors. Her palette, which may be a bit sweet for some, is still used very articulately and allows Kozik to make her forms pop and her planes flatten. Shelter testifies to developments in both Kozik’s painting and narrative skills.

Stepping into the sculpture yard behind the gallery, I was enveloped in another world far removed from metropolitan domesticity. On my initial visit, there was a light layer of icy snow caked on parts of Sook Jin Jo’s wooden installation. It provided a frosty crunch as I walked around and through this rambling gnarled construction. The sun was setting, but the natural light played on the white of the snow and brought the various forms into strong contrast, creating a sense of primitive wilderness like stumbling into an isolated glen on a high, wind-swept plateau. The sculpture space at Black and White is a rectangle of quietude, with blank walls that rise up at least four meters, a unique site, and perfect for the presentation of Jo’s My Brother’s Keeper.

Taken individually, the elements have a strong connotation of collage. Upright members are twisted and kinked in apparently organic shapes. Up close viewing reveals that the limbs and posts are cut and joined from an ironic amalgam of raw wood and milled and lathed lumber. Weathered branches have scraps of boards and worn architectural remnants inserted into their configurations as if a pre-industrial forest had collided with and embraced a post-industrial one. Jo’s eye for analogous forms presents us with a salient insight into a material often taken for granted: wood. The structure’s coherence is reinforced by its spectrum of earthen and woody browns, accentuated sparingly with only a few sticks of faded enamel color. A shape that might be the trunk of a sapling is propped up by what should be a ragged root, but the spiral end of an oak banister is substituted. A cylindrical limb has a two-by-four grafted in its middle, pricking the awareness of just how much of our constructed world is cut out of the stuff of nature. Vertical posts or shoots are braced upright by a ramshackle network of crossbeams and buttresses. While moving around and among the different components of My Brother’s Keeper, readings at different points change from architecture at its most primitive to a blighted forest with leaves and greenery desiccated to a climb over a junk pile of discarded lumber headed to a bonfire.

There is, underlying all the formalistic and “artistic” structural intentions of this work, one uniting theme that Jo’s selection of wood is sublimely and poetically appropriate for: the inevitability of death and decay. One becomes instantly aware through sight and smell of the fragility of even the most sturdy log or beam to the forces of time, wind, weather, and rot. Sook Jin Jo’s My Brother’s Keeper delivers to us the same insights into nature and our place within it that we might experience during a winter hike through distant forests.