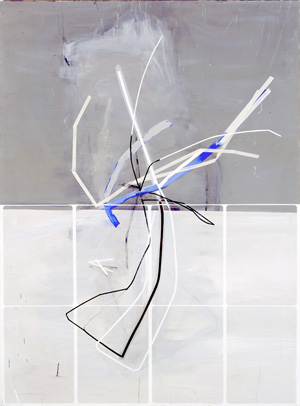 Betty Cuningham is currently exhibiting a painter named Gordon Moore. His canvases are all vertical. Each is cut horizontally in two by a lightly rendered grid that serves as backdrop to the slashing and meandering brushwork taking place over its surface. The deployment of the grid could be understood on occasion as a foil to the looser brushwork or as a structural device, but its imposition in each and every painting suggests something deeper that I choose to identify with the field of vision. With his extraordinary brushwork, Moore attempts to glean form from his underlying armature while he manipulates and generally readjusts his surfaces.

This line work is the crux of Moore’s paintings. At close range, the viewer is treated to a tour de force of the artist’s control of his medium. In a painting such as “Grip,” lines are taped and tape is used as a line. Fat paint is dragged lazily along and lean paint is pushed around; lines are fast and slow, even and broken, focused and obscured. Elemental to painting, these qualities are greatly satisfying in their own right. “Grip” also fascinates me with its title, which acknowledges an attempt to perceive—to “get a grip” on what one is seeing. It’s spooky, vaguely arachnoid, with its muted palette of grays and earth tones punctuated with occasional slashes of primary or secondary color.

When viewed from afar, these paintings take on another aspect. The variety of line begins to converge into a semblance of form, creating the impression that what one experiences at close range in these paintings as chaos is in fact a part of a greater order. The artist appears to have an object in mind that he intends to render. Then he is stymied. He stops, perhaps uncertain of his object, and leaves us with only lines designating its essential structure. Judging by Moore’s paintings, perception is a trickier proposition than it might as first appear.

At what point it can be said: I identify this thing as independent from and opposed to other things; I am able to perceive it in its entirety. I recognize my friend across the street, but is he truly present to me apart from the pavement on which he walks, the buildings that surround us, the cars passing between us and the sky overhead? I see those things as I see him—all parts of the whole impose themselves on my gaze and I must struggle to select the part to which I wish to give my particular attention. In the infinite flux of things, can an autonomous form be thought to exist? The cubists were after just such a full understanding of objects. Moore is ultimately reluctant to define anything emphatically before his sturdy underlying structures, suggesting that the limits and order of seeing trump any object of sight to which we might temporarily cling.

Wallace Berman: Off the Grid

Descending into the cellar at TOTAH feels like entering a sanctum sanctorum, the holy of holies. The leitmotif of this exhibition could be the theme of intimacy, images feeling like handheld windows into the artist’s psyche.