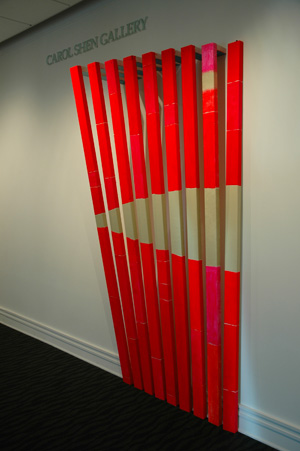 In mediating the on-going dialogue between painting, sculpture, and site-specific installation, Cordy Ryman’s latest exhibit at the Carol Shen, the Packer Collegiate Institute, seems to reveal a certain degree of natural responsiveness to and acceptance of the nature of this rather difficult and unconventional terrain, which very few artists in the last few decades were able to negotiate, namely Joseph Beuys, Dieter Roth, Mario Merz, and Richard Tuttle.

Like every force evolves a form, Ryman’s work suggests undoubtedly his non-conformist attitude toward the formal restrictions of minimalism. Actually, it’d be equally impossible to place him in other known canons. But perhaps the more important issue here is making observations as to how the three activities could relate and inform one another.

What one notices in the first glance are the artist’s playful spirit and the treatment of his chosen materials. By altering surface appearances while retaining their initial materialities, which at times can be tender, other times coarse, Ryman introduces the additional dimension to unpredictable readings and of what can be perceived in its visual perception, how the forms are made and finally their applications to the given space. For instance, in “Wall Press,” which is composed by two unequal and nearly square pieces of plywood. Both are painted uniformed blue with red border. With a good half a foot between them, one square is on the wall propped against the other on the floor by a 2”x4” in the middle. The stasis of the two squares’ vertical and horizontal planes is precariously in flux because of the diagonal movement of the 2”x4” that holds them together.

In another piece, “Hall Wave,” there’re nine 2×4 vertical units with their supports from the top, rotating from left to right with changes in the successive protrusion from the wall. Again the spatial construction creates this strange visual collision between symmetrical repetition of the verticals and asymmetry of everything else—the wavy effect coming from the top; the irregular intervals, measured from 8” to 10” between the nine verticals, which are painted with irregular stripes of red, fluorescent pink over white from underneath. It is at once whimsical and instable, like Pieter Bruegel’s “Blind Leading the Blind,” who from the top of a slope pull one another and stumble into a ditch on the lower right of the canvas.

Much depends on the verge of what could be held together in contrast to things falling apart. The distant recognition of which almost readily dimmed upon its opposing forces, which then subtly split the world into two realities: the concrete desire to satisfy the need for order, which pertains to the coherent and rational order, and the elements of “chance,” a place of wonder. Even more evidence of this can be found in “Notebook,” probably the strongest piece in the gallery. Apart from the 20 units of wooden squares placed vertically in the corner left wall with approximately 5” interval are four, which overlap a large, green-painted square. What is most appealing, in fact, lies in the imperfection of the scored pencil lines and the cut marks on the sheet-rock wall.

Although it’s fairly difficult to detect Ryman’s ultimate aim, one is led to believe the artist’s singular belief and invested trust in the making-process of his work. And if there is a method that could perhaps inscribe his way of working between painting, sculpture and site-specific installation, the method is simply that of an artist whose wandering and indetermining means does in turn yield his sole pleasure in revealing the inherent beauty of the unprecious and imperfect. Furthermore, Ryman’s openness to various possibilities and his visceral feeling towards the material’s demands make it ever more generous to viewers who may otherwise perceive the experience of art as a formidable realm. Here, the sense of inclusion and wondrous moment is both simultaneously present—hence what best characterizes Ryman’s attitude; his bringing of all those elements together in the exclusion of irony, and his acceptance of the perpetually unpredictable process. One expects the result will be similarly reflected.

Cordy Ryman has long made a practice of installing works to suit the context of a specific gallery space, and his current exhibition at Freight + Volume is no different.

Jennifer Packer: The Eye Is Not Satisfied With Seeing

At the heart of Packer’s first institutional show outside the US is the desire to make visible the invisible and do justice to stories like Sandra Bland’s, creating space in which to mourn Black deaths.

The Institute of Queer Ecology: Metamorphosis

By Alex A. Jones