The Life and Death of a City 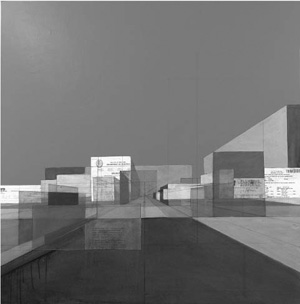 Cheryl Molnar, “Berry Street,” mixed media and collage on board.

Over the last twenty years, north Brooklyn has endured one crisis after another: crack, gentrification, homesteading dot-comers, more gentrification, destination restaurants, luxury lofts, the closing of Engine 212, a new power station and now development of the Greenpoint/Williamsburg waterfront. Cheryl Molnar’s new show at McCaig-Welles examines this latest crisis to grip New York’s epicenter of creativity through thoughtful geometric abstractions that look at the graphic beauty of a place not use to artistic scrutiny.

This quiet show is dominated by Crayola colors, collages of found paper, washes of paint, and anxious drawings of clear geometric forms. Molnar offers a smattering of perspectives sometimes diverse, but consistently calculated in tone. The exhibit’s title, The Life and Death of a City, evokes Jane Jacobs’ landmark book, Death and Life of Great American Cities, which helped save Greenwich Village from one of Robert Moses’s neighborhood destroying highway projects. Unlike Jacobs, Molnar doesn’t venture into activism, but simply takes a cool look at the transformation underway.

In a large work, “This is Luxury,” a bulbous and bulging big box structure pushes out until it becomes almost uncomfortable to look at. Like an SUV or a monster home, it seems larger than it should be and more covetous than is probably appropriate. “Along the Waterfront” and “New Waterfront” are her most successful: whenever Molnar portrays—like in these two—the nexus of land, water and architecture the results are impressive, tense, easy, grand, and bold.

“Along the Waterfront” careens off the edges of the board and exhibits a playfulness few other works in the show have. Its ochre and dirty salmon hues are vivid. Its river of green, including a channel that slices into the landmass populated by a sea of monolithic walls, are almost sensual. It comes across as a sketch for some unrealized land art project. Manhattan looks dead in its archetypal staidness, while Brooklyn and Queens are portrayed as fertile ground for possibilities.

“New Waterfront” is the most complex work in the show and the only one that plays with perspective. It includes conversational forms that are engaged in some unspoken dialogue. It is a multi-layered work and has its own internal mood and structure; it is as if the painting has folded into itself in a contemplative moment. It is no longer a rendering but collapses into many things. Its negative and positive spaces converge and vacillate quietly. The browns and ivories sometimes appear as veils that filter the forms against the saturated ground.

Unlike her larger works, Molnar’s drawings are consistently haphazard and uneven. Some look like preparatory studies for larger works while others more like studio refuse. Perhaps the most interesting object in the show is “10/05 The Greenpoint/Williamsburg Waterfront,” a unique accordion artist’s book that documents the Greenpoint/Williamsburg waterfront, building by building, reminiscent of Ed Ruscha’s 1960s documentation of Sunset Strip, although Molnar’s version is more mechanical than aesthetic.

A young artist with great potential, Molnar is most at home at composing shapes and planes that appear to float on pools of liquid color. The collage of papers that underlie the forms do little to animate the compositions and do much to dehumanize the subject and transform the whole mega-project into an artistic take on a Sims computer game, but maybe that’s her point. The Life and Death of a City is a good show, but one with too many gaffes to make it any more than that.

Ama Birch was born on the Lower East Side during a blizzard.