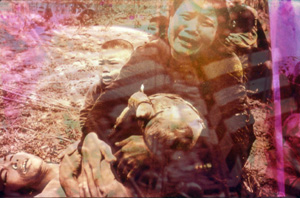 Since her staged body performances of the early 1960s, Carolee Schneemann has been known to challenge emotional boundaries and unmask, if not attack, taboos wherever society might have safely stored them. Over four decades, her multimedia work has remained a mirror of worldly disasters, in particular of wars led or caused in reaction to Western politics. A current survey, entitled Corporeal, proves that rather than a witty comment on our times, Schneemann’s oeuvre manifests as passionate and physically felt outcry against all the repeating pain and wrongs stirred by societies that fail to learn from the catastrophes of the past.

Including photography, painting, film, and various print mediums, the installation avoids chronological arrangements. Instead, highlights from 1963 to 2005 are arranged rhythmically, bestowing the exhibition with a forceful dynamic that determinately carries the viewer from September 11-inspired sequences to new editions and first time gelatin prints of early performance pieces before breaking, not unlike a wave, in all its force in the back room, where the video “Viet-Flakes” (1965) shows the most horrific aftermath of war imaginable.

One of Schneemann’s most recent works, “Terminal Velocity” (2001-2005), is a vertical grid of several close-up scans of nine individuals who leaped into death from the World Trade Center’s upper floors before its collapse. Though the truthfulness of these digital pictures was solidified by their high visibility in wide publication, their sequential presentation and the enlarged focus of the bodies’ postures in midair cause an unsettling sense of abstraction. We find ourselves equally curious and pained by these images, which in their frozen state become iconic depictions of the inescapable dance of death or, as the title of a related work suggests, the uncertain plunge into the “Dark Pond.” As a wall plaque points out, it is through computer technology that Schneemann is able to establish intimate contact with the subjects; in this case digital media allows Schneemann to isolate the figure from the larger context almost as if seen through a magnifying glass that tends to blur everything that is not the center of focus. Though remaining anonymous and hence, beyond approach, a sense of individuality is reflected as each body is shaped differently while rushing to its nightmarish end.

Comparing “Terminal Velocity” or “Dark Pond” with documents of Schneemann’s autobiographical performances, such as “Eye Body—Thirty Six Transformative Actions” (1963) or the overtly sexual piece “Interior Scroll” (1975), the thought occurs that indeed, as the exhibition’s title of Corporeal points out, reality is bound to physical substance. It is only through a body that life can be expressed, be encapsulated. To test the boundaries of the primacy of materiality is the core of Schneemann’s oeuvre.

A chaotic mélange of rapidly changing snippets of Western music, ranging from classical to The Beatles, fill the room as the show culminates. The soundtrack is comprised of some of the best that Western culture has to offer, but as a whole it is nothing but disturbing and physically agonizing. This white noise serves as underpainting to images of Vietnam War victims, body parts, and mountains of corpses piled on streets. As the camera zooms in on a dead woman’s face, her eyes stare at us with rigor mortis. It is in the emptiness of this lightless soul that we find the most devastating truth about Western sins. How could this not have taught us how to handle our future? How could this truth not be terrifying enough to avoid human destruction by the hands of other humans in the future?

Over a lifetime of making art, pleasure, provocations, home, more art and always art—her emotional exactitude and generosity touched the earth, the art world, and the lives of countless human and nonhuman intimates and strangers. We offer this tribute to the artist and friend—a loss beyond imagination.

In early October, the Chicago-based multi-genre instrumental group Joshua Abrams & Natural Information Society appeared on back-to-back nights at Union Pool in Williamsburg. Formed in 2010 and led by bassist and composer Abrams, a longtime veteran of Chicago’s creative and experimental scene, the group is continually shapeshifting, with ever changing lineups. The second night of the two, the group took the form of a quartet that included Abrams on guimbri (a Moroccan bass lute), Lisa Alvarado on processed harmonium, Jason Stein on bass clarinet, and Jim White of the Australian instrumental band Dirty Three on drums.

Knowles and Schneemann, in their own ways, indelibly shaped performance art’s trajectory throughout the late 20th century. In October, the two artists met at Knowles’s Manhattan loft to discuss Fluxus, feminism, life with partners, friendships, families, and art.

Alluding to Charlie Brooker’s dystopian TV series, Black Mirror primes the viewer for a dark and critical engagement with contemporary culture and technology. Unfortunately, those expecting a dark vision of our politically fragmented and technology obsessed times are likely to be disappointed.