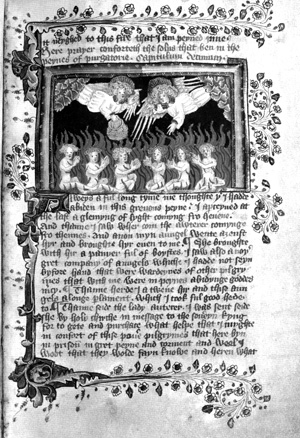 folio. 48r: Praying souls in the Purgatory, from The Book of Guilaume Deguileville, England, ca. 1430

The Splendor of the Word is a selection from the New York Public Library’s collection of 286 illuminated manuscripts. Co-curated by Professors Jonathan J.G. Alexander, James H. Marrow, and Lucy Freeman Sandler, “three great masters of manuscript studies”, to quote Library President Paul LeClerc, one hundred examples will be on view until Feb. 12. Until recently the collection had not been cataloged, and many of the manuscripts were unknown to scholars. The exhibition contains the famous ‘Tickhill Psalter’, along with splendid missals, books of hours, Gospels, Bibles, as well as secular material. One January morning co-curator Lucy Freeman Sandler generously consented to accompany The Brooklyn Rail through the exhibition and discuss some of her favorites. Following are selections from her comments.

Jim Long (Rail): Shall we begin with the earliest piece in the exhibit?

Lucy Freeman Sandler: The earliest piece, The Harkness Gospels, is a manuscript from the 9th Century, Brittany. I’ll talk about what Jonathan Alexander wrote in the catalogue. He goes through all the possible affiliations, the archaic style; all the affiliations with insular art, with continental manuscripts under Irish influence in the 8th and 9th Century. And some of the decorative pieces you could even connect with Coptic art. This is the opening of Matthew; and maybe because it’s the first Gospel, it’s got the five sections, and it’s Christ surrounded by animal-headed figures that are the symbols for all the evangelists.

Rail: And they only appeared in the Matthew Gospel?

Sandler: Yes, and it’s not common—it’s a format that appears in other Gospel works. In addition there’s usually another page with some kind of image of Matthew, as this one (to the right) is the image of Luke. His head is his symbol—a bull—and his body is a man.

Rail: It’s a wonderful drawing. I’m sure there was a period in the 18th or 19th Century when they looked primitive.

Sandler: Or in the 1920s. And of course there are manuscripts from an earlier date than this, where, in this mode, you could say this is also archaic, even though this is a hand that has this idea of playing with the colors, a sense of pattern, a sense of placement of the figure, I mean he does all kinds of very good things. But if you see other insular manuscripts, or manuscripts produced on the continent by insular artists, they’re more sophisticated, and they’re more elaborate, too; if they’re linear, there’s more pattern.

A Glossed Gospel of Matthew and Mark. France end of the 12th Century

Rail: Who makes these notations in the margins?

Sandler: Well that depends. Very often texts were corrected, very often they were written and then they were corrected. This one has later responses by readers and sometimes their corrections. This is a Gospel that has its commentary built in because it’s ‘glossed’, so the actual text begins on this page, and the text, per se, is in the central column where the ‘L’ is, you see? (There are three columns of text side-by-side.) So that’s the beginning of Matthew and everything surrounding it is commentary. And this manuscript occasionally has little symbols in the margins and in the text that tie the proper gloss with the text. This is the end of the prologue—I think they’re incredible accomplishments in the design of the page. To get all this to fit! And it isn’t rigid at all, because if they had a lot of commentary they could make three columns, as on the right. There are also interlinear glosses between the lines of text. Explanations of individual words.

Rail: Is this a Latin translation from Greek?

Sandler: Yes, the Gospels are in Latin, translated from Greek—which was the language they were written in. With the Old Testament there would have been a lot in translation that was both from Greek and from Hebrew. But the earliest physical Latin bible predates the earliest full surviving Hebrew text.

Sandler: This is the first letter of the first word in Genesis, ‘I’, “In the beginning”, ‘In principio’, and the ‘I’ extends down the length of the page.

Rail: We have this marvelous bird emerging at the base.

Sandler: We have that bird, and there are scenes of creation in these pointed oval medallions. It starts at the top with God as, sort of, thinking about making everything, and then there’s six days and it ends with the bird and the foliate explosion at the bottom, but the last medallion is Adam, and I couldn’t figure out what this meant, but Adam has a kind of second head in his mid-section, and the features of that are bearded just like God, so Adam is created in the image of God.

Rail: The painting is pigment dissolved in gum Arabic?

Sandler: Yes, I mean it’s what we would call tempera—the pigment is held together with egg.

Rail: And in this period it’s mostly painting, less gilding?

Sandler: This actually has gold in the background. The light isn’t very good and the gold isn’t very thick, but whether or not it has gold in the thirteenth century depends on how much you were willing to spend on your book. For instance this one has no illustrations, it just has pen-work initials, but they’re superb.

Rail: So Gospels were….

Sandler: A Gospel book was a liturgical book, because the Gospels are read in the Mass. That’s why they made a separate book out of them. You could have a book with the entire the New Testament, which is less common. Sometimes Bibles are made in several volumes and that might be one of the volumes, or you can have glossed Gospels, which isn’t a liturgical book, it’s meant for study and exposition, or you can have the whole Bible, like these.

Rail: When does the tradition of the illuminated letter begin?

Sandler: Well, not at the very beginning, not with the earliest codices that survive, whether they’re classical texts or fragments of biblical texts. But there’s at least one manuscript from the fifth century that has actual illustrations. It’s a fragment of a biblical manuscript with a few leaves with pictures from the life of Samuel. There are other sixth century manuscripts that have pictures in them, but as far as writing out the text and punctuating it with initial letters, the earliest fourth century codices have only a kind of enlarged initial at the top left hand corner of each page, and are not written in columns, but one column. Some time in the sixth century they began to punctuate, to articulate the text, which earlier had been written continuously, without even word separation. Adding large initials, capital letters: that is a development that really flowers in the sixth and seventh centuries.

Sandler: See this sewing? You see toward the bottom? This orange? The parchment was not of the best quality and contemporaneously all the holes and slits were sewn up. Some of this actually looks like crocheting.

Sandler: This would probably be calf skin. The material comes from sheep or from calves, and sometimes from goats. Let’s say this is what, fifteen inches high, it’s probably too big for a sheep skin, but only a chemist or a biologist would be able to tell the difference between calf skin and sheep skin, so everything is called indifferently parchment or vellum. “Vellum” actually comes from the word for ‘calf’. I think there’s a tendency to use vellum for a finer material. More smoothly prepared. But actually if it comes from a calf, it’s likely to be larger and sometimes heavier.

Rail: Is every manuscript that we are looking at parchment?

Rail: But I think these two over here are my favorites.

Sandler: It’s so didactic (Cadamosto), it’s so informative, so precise, and the people swimming! I like this one (de Sacrobosco) because it’s an example of an elementary school text, usually not done with gold, and it’s full of marginal and interlinear explanations—in some cases the interlinear explanations are actually expansions of abbreviations in the text to help you. This last text is arithmetic problems like the kind you and I had in elementary school. Let’s take another look at the ‘Fish Market’. Here’s a nice hand. He’s accustomed to planting figures in space. He’s not sure how to do the feet, but he does the shoulders very well, and he has a nice sense of gesture.

Rail: What is this we’re looking at?

Sandler: It’s a tale, the story was written first in French and then translated into English, and it’s in prose. The words of the text contain some of the motifs that then appear in the illustrations. Sometimes the figures of speech become realized in literal word images. I just love the angels! These souls are in purgatory, and the angels are bringing them baskets, wicker baskets. It’s spiritual sustenance, literal picturing of a metaphor.

Rail: Was the pilgrimage of the soul part of Christian doctrine?

Sandler: The format is comparable to a lot of stories. It’s a moralizing Christian romance. They always start with a vision—the narrator has a dream, and he dreams that a guide picks him up and transports him and shows him visions of the pain of the souls in purgatory, and visions of heaven, and ultimately returns him back to his bed.

Rail: Professor Sandler, that sounds like a perfect note on which to end our journey through this wonderful exhibition. Thank you for sharing your time, enthusiasm, and expertise with our readers.

The publisher calls it “a textualized slasher—brought to you in moldy technicolor splendor—sure to fuel your nightmares for years to come,” and every page of Crystal Lake delivers on that threatening promise. Berry and I corresponded over email in late summer of 2021, one of the hottest on record, and a time during which (like most of recorded history and like slasher movies themselves) human beings were inflicting astonishing violence upon one another with no signs of stopping.