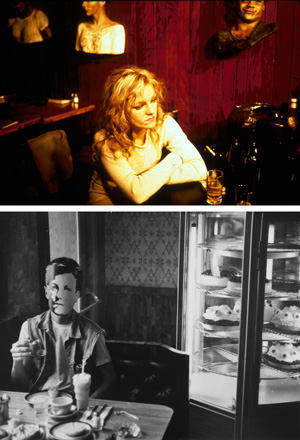 First, let’s get the nostalgia out of the way. Sure, the bands were great, and if you were lucky enough to play in one, the clothes were great too. But if the young, wild, and barely employed could afford to live, make art, and party hard between Canal and 14th Streets in the mid- to late-seventies, it was for the same socio-economic reasons that govern affordability, or the lack of it, anywhere. Except for a few oases like the Ukrainian enclave around East 6th Street, the area that spawned the Downtown scene was blighted by poverty, unemployment, drugs, prostitution, homelessness, arson, and street crime; or it was simply bleak.

New York City itself seemed a place without a future, battered by blackouts, riots, serial killings, and the onset of AIDS. The migration of industrial jobs to low-wage regions of the South and the subsequent flight of its middle and working classes eroded the city’s tax base and, coupled with the collapse of the financial markets, catapulted it toward bankruptcy. The empty lofts of SoHo weren’t a real-estate bonanza bestowed upon artists by a benign Providence, but the after-effects of a catastrophic economic meltdown.

The musicians, writers, artists, performers, and hangers-on who staked out a piece of lower Manhattan’s urban dystopia were self-consciously living in a metaphor. This was post-industrial America, its greatness departed, its economy ruined by a decade of war, its racial fissures and social failures manifested by empty lots, rusted car husks, and broken hypodermic needles. In Peter Hujar’s “Leroy Street,” a 1976 black-and-white photograph reproduced on the poster for The Downtown Show: The New York Art Scene, 1974-1984, an oppressive night sky oozes down the walls of a shuttered garage, spreads across a vacant lot, and spills into the street, inching toward a solitary sedan parked a block away. The image evokes the loneliness and isolation of a Depression-era Edward Hopper, but filtered through a cold historical lens that overlays America’s pre-WWII potential with its post-Vietnam collapse.

The emptiness of the nation’s promises, mirrored by Hujar’s depopulated streets, would have lent the photograph a leaden aftertaste if not for the shining wet cobblestones and glowing windows that puncture the darkness and bring to mind the lush silver-on-black images of Brassaï’s Paris. Like the interwar denizens of the Left Bank, liberated from the weight of tradition by the absurdity and waste of World War I, the latter-day bohemians of the self-styled Blank Generation faced the loss of the future by flipping off societal expectations and living in an eternal now. They packed the hard-won yet fleeting freedoms of the sixties into a sexual and cultural speedball and filled the encroaching void with a reckless, manic energy.

The Downtown Show, currently running at NYU’s Grey Art Gallery and Fales Library and Special Collections, is a quixotic attempt to come to terms with a sprawling, incoherent, willfully obstreperous, and rabidly anti-institutional movement within the tidy confines of an institutional setting. In the publication accompanying the show, Carlo McCormick, who curated the exhibition in consultation with Grey Art Gallery Director Lynn Gumpert and Fales Library Director Marvin J. Taylor, acknowledges the impossibility of escaping oversimplification and artifice: “I came up with these rather vague and totally problematic constructs by which we could put different people of different scenes and from different moments of this arc in the same room and in conversation with each other.”

In other words, McCormick grouped the artwork thematically under serviceably generalized categories such as “Broken Stories,” “Interventions,” “Body Politics” and “Salon de Refuse,” gathering together media as diverse as video, handwritten notebooks, abstract painting, and costume jewelry under the same heading. McCormick’s real contribution, however, was his first-hand knowledge of the period and his ability to unearth a staggering number of unknown, little-seen and long-forgotten works that feel fresh, vibrant, and
pungently contemporary.

Pieces like Becky Howland’s “Rifle and Money Bags” and “Oil Rig and Money Bags” Christmas ornaments, Robert Goldman (Bobby G)’s “Cruise Missile Sox,” and Kathleen Thomas’s fiendish full metal jacket bullets have achieved a distressing timelessness. Justen Ladda’s candy-colored newspaper photographs—“The Shah of Iran in His Last Days,” “Reagan Election Campaign,” and “Russians Invading Afghanistan, Dec. 31, 1979”—feel like déjà vu all over again. Mimi Gross’s funky portrait plaques from “8 American Servicemen Die in Iran” (depicting the casualties of Jimmy Carter’s doomed attempt to rescue the American hostages in Tehran) are inscribed with the fallen’s name, age, and hometown, eerily anticipating the daily “Names of the Dead” column in The New York Times. And all you need to do is paste W’s face on Sue Coe’s mixed media collage of Ronald Reagan as a masked, gutted pig with a Klansman in his belly, and you’re back in business.

There’s a moral urgency behind much of this work that speaks volumes to our own time, and in many respects is way ahead of it. The generation of artists who came of age in the mid-seventies grew up watching the country slowly annihilate itself through assassination, intolerance, imperialist warfare, and political corruption, rendering any form of outside authority into a contemptible joke. But the movement’s go-for-broke experimentation was not simply an escape from a dysfunctional culture; beneath the preening narcissism and stiff black leather there was a heartfelt attempt to start over, to strip the means of expression to its basic building blocks, sometimes down to one’s own naked body, and create offerings not to society at large, but to a self-selected, like-minded community.

The opening chorus of Philip Glass’s Einstein on the Beach floats through the exhibition at regular intervals from the soundtrack of a video by Michel Auder, chanting “One two three four…” in rudimentary harmonies that seem to reinvent and restore the idea of music. A notebook entry by Eric Bogosian (one of the many invaluable autograph manuscripts, chapbooks, artists’ books, magazines, and other printed materials from the Fales Library) defines “expressionistic” or “non-classical work” as seeking to transcend form and “directly contact [the viewer] and produce experience,” as his unremittingly scatological performance piece, Funhouse, undoubtedly did. Perhaps the most concise explication of the Downtown aesthetic can be found on “Interior Scroll,” which Carolee Schneemann unfurled from her vagina and read to a live audience in one of the more exquisitely transgressive moments of a transgressive era—“the personal clutter / the persistence of feelings / the hand-touch sensibility / the diaristic indulgence / the painterly mess / the dense gestalt / the primitive techniques…”

It’s hard to walk through this exhibition and not feel a pang over the passing of an era as collaborative, communal, and relentlessly experimental as the Downtown scene. The sheer volume and multiplicity of the works on display—Martha Rosler’s semiotic pairings of word and image; Adam Purple’s “Garden of Eden”; Jimmy DeSana’s adventures in auto-eroticism; Christopher Knowles’s two-toned letter to his grandparents; David Wojnarowicz’s conceptual pranks and confessional journals; the vaudevillian hijinks of the Wooster Group; Jean-Michel Basquiat’s wall-stealing oil stick skull; Joan Jonas’s dreamy underwater swimmers; Richard Bosman’s linoleum cuts on paper towels; Ana Mendieta’s prophetic burning shroud; books and manuscripts by Kathy Acker; Jack Smith’s recipe for Forbidden Blossom of Port Moresby; Nan Goldin’s tragically sensual photographs; Richard Hambleton’s uncredited black-brushed silhouette lurking in a far corner; Bomb, Raw, and Top Stories magazines; the list goes on and on—feel like so many wormholes to so many alternate universes. They don’t pretend to be the whole story; they’re hardly even the beginning of the story.

The Downtown movement flamed out as drugs and AIDS took many of its most extravagantly gifted personalities, and real estate pressures invaded the neighborhood. The million-dollar penthouses now rising on the Bowery all but guarantee that there will never be another moment like it in that particular place, just as there’s never been anything like Bebop, AbEx, or the Beats. But the spirit of those times—a swirling tonic of beauty and rage, one part vulgarian anarchy, one part Blakean Romanticism—will coalesce in another form, maybe in a borough of New York, but more likely in the global digital underground, as a rising sense of revulsion against social and economic inequities, ruinous political policies, and the corporatization of culture reaches critical mass. Maybe right about now.

In this space just west of Mercer Street, Shanzhai Lyric traces the transitory and ephemeral nature of Canal Street as a site of knockoff production, dislocated trade routes, and gentrification—and the ways in which bootlegging can generate creative disruptions.

Meriem Bennani: Party on the CAPS

For Meriem Bennani’s first solo exhibition at CLEARING, the Brooklyn-based Moroccan artist has transformed the gallery into something like a spaceship.

When he dies of a drug overdose at 33 during a vacation in the Maldives, a German artist, lately resident in New York, leaves behind in his Düsseldorf studio a sequence of 40 aluminum panels painted in bands of red, yellow and black.