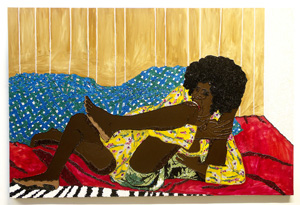 In all of the Studio Museum in Harlem’s Frequency-related printed matter the exhibition’s wall text, press release, and brochure curators Thelma Golden and Christine Kim distance the museum’s second supershow of emerging American black artists from its first, the whoppingly successful 2001 exhibition Freestyle. Per the curators, Frequency “is commonly misconstrued as Freestyle II,” it isn’t “a reprise, nor is it a continuation” of its themes, and “it differs in several fundamental ways” (none of which are explained in Frequency’s press release; perhaps they will in its catalogue, still unavailable three weeks after the show’s opening). Freestyle grouped 28 young black artists and what later emerged as a categorizing principle was “post-black,” which Frequency’s wall text cites as a term that, “Identified a generation of black artists who felt free to abandon or confront the label of ‘black artist,’ preferring to be understood as individuals with complex investigations of blackness in their work.” So why this resistance to position Frequency as Freestyle’s follow-up?

Freestyle alerted a politely, willfully oblivious art world to art by young black artists that equaled (maybe bettered) much work being churned out by young, grad-school educated white artists. Golden, in a director’s note for Frequency’s brochure, implies that a post-Freestyle art world that grasped the show’s vitality may explain her reluctance to draw comparisons: “After the tremendous success of Freestyle in 2001, I had both privately and publicly acknowledged that there might no longer be a need for me to organize group shows featuring the works of emerging black artists.” But as Hurricane Katrina in New Orleans and recent rioting in and around Paris have shown, the normalization of systematic exclusion and segregation along lines of race remains intact without situations that expose it. Certainly these real-world examples also apply to the art world; as Franklin Sirmans writes in his catalogue essay for Frequency, many of the artists in Freestyle proceeded to score gallery representation even art-star status (Julie Mehrtu and Kehinde Wiley, most obviously) in the show’s wake. The same will likely be true of Frequency.

As with any group show that eschews a focused organizational principle, the work in Frequency is inconsistent, often in competition with one another for space and attention, and mostly uncategorizable. The real loser is video, which (aside from a screen showing a loop of Jefferson Pinder and Jeff Stein’s “Carwash Meditations,” 2005, and Pinder’s “Invisible Man,” 2005) is segregated in a single room and programmed one long loop, meaning all but the most patient viewers will miss several. Kalup Linzy’s hilarious “Conversations wit de Churen III: da Young and da Mess” is the obvious crowd-pleaser. The video’s protagonists are black gay men and the narrative tone reproduces daytime soap operas’ transparent cliffhangers. Linzy’s Alex Bag-ish execution is a bit silly, (especially when the main character croons “PLENTY OF NUTS!!!” R&B-style over the phone to a psychic while soaking in a bubble bath) but we’ve far from reached the era when the desires and dilemmas of black gay men could be reproduced so frankly on “real” TV.

While there aren’t really stylistic trends to speak of in Frequency, identity-based conceptual work which eschews the production of iconic imagery runs through much of the work, including that of Karyn Olivier, Shinique Amie Smith, Mike Cloud, and others. Olivier’s “Doubles,” 2005, for instance, consists of a wooden seesaw-like construction with the plank’s higher end resting against the wall. Positioned on the wall just above the apex of this plank is a photograph showing two identical boarded-up houses, each other’s virtual mirror image except for one’s rock path in its front yard. Olivier may be showing a working-class version of competitive lawn manicuring in wealthy American suburbs, with the seesaw of status tipping in the direction of the house save one accoutrement. Leslie Hewitt’s “riffs on real time,” all 2002-5, contain similar associations to home as a place where identity is built. Each of her five photos shows a photo on top of an object on top of a surface, implying that the banal, yellowing snapshots; the scraps of paper; the 1975 30th anniversary issue of Ebony are meaningful signifiers from Hewitt’s youth, historical layers of personality construction. Hewitt’s is a self-centered detective game: the viewer scavenges for clues to unpack her personal narrative.

Like in so much current work by young artists, there’s evidence in Frequency of a fetish with ’70s style. Mickalene Thomas’ two visually dazzling acrylic, enamel, and rhinestone on wood pieces show women decked out in hotpants, ecstatically wrestling with other figures that appear to emanate from the self and merge with their own body. The ’70s being the decade of blaxploitation film, it’s hard to look at these images without thinking of the sexualization of black women via TV and movie screens, and Thomas’ attitude toward her figures remains cloaked. Is she empowering them by portraying them as physical aggressors or is she ashamed by these scantily-clad exhibitionists? Perhaps these works are homages to women who fought for real social change for minorities and women. But by using a period style without relating that decade to current times in a meaningful way, Thomas’ paintings seem to appropriate a stylistic ethos of a former era because of its current cultural fashionability. A similar critique can be leveled at Michael Paul Britto’s blaxploitation-style Dirrrty Harriet Tubman poster, 2005, presumably meant to advertise his video of the same name.

Demetrius Oliver’s staged photos of a man’s face smeared in chocolate frosting or a pair of sandaled feet wrapped either in tape or plastic feel like re-enactments of or attempts to purge trauma, similar to Mike Kelley’s current show at Gagosian Gallery or to William Pope.L’s use of underwear and condiments as specific signifiers of poverty. Jeff Sonhouse’s Inauguration of the Solicitor, a diptych showing frontal and profile views of a dressed-to-the-nines dandy with an afro made from matches portrays the black man as perpetual suspect, eternally an object of suspicion, fascination, and fear. Another Sonhouse painting showing an imperious cardinal with an imposing necklace made from cowrie shells hanging off the canvas demonstrates the 3-D, painting-as-object direction Sonhouse is moving into (and has hinted at for several years by using matches for his characters’ hair).

Such different attitudes toward portraiture are microcosmic of Frequency’s prevailing ethos: dispersion and diversity. Much of the exhibition’s work concerns personal identity, some of it so enveloped in internalized matters that it’s difficult to connect with. Not much of the work can be said to be overtly political, although almost all of it pursues a plotting the self’s politics. The curators may be attempting to subvert easy codification of “black aesthetics” simply by showing how young black artists are so disparately engaged. Although the actual meaning of the “post-black” phrase that developed as an adjective for the work in Freestyle remains somewhat opaque, the term allowed its artists to be easily bunched together, even cited as part of a post-black “movement,” and Frequency’s diversity (material and conceptual) and its artists constant use of hermetic systems of signification may represent an attempt to subvert any notion of categorization.

As reflected by the Studio Museum’s citation of Frequency’s artists as “emerging,” the real principle uniting this group is generational. Their average age is 31.6 and almost half of them (17 of 35) are 30 or younger. (Just 31% 11 of 35 are women.) By going with the flow of New York’s other showcases for young artists—the Whitney Biennial and P.S.1’s Greater New York—one could argue that the Studio Museum is leveling playing field for black artists in a very white art world much in the way A.I.R. Gallery did for women in an almost totally male art world in the 1970s. According to the exhibition’s wall text, Frequency “exemplifies the non-thematic, non-linear climate of contemporary art today.” Maybe it’s such “non-linearity” that makes these showcases for very young artists unruly to the point of tedious. As will be true of any large showcase of young artists, some of the work in Frequency is exciting and some feels disposable and conceptually thin.The prevailing sensation of Frequency is of a battle royal where each artist’s work is given no option but to scream out for attention since there’s no framework relating it to the other work in the show. Frequency’smessiness could be read as vibrancy, but it’s just as likely to push it through the cracks of memory, to be recalled in the future as just another supershow.

1 The press pack I was given included a reproduction only of Franklin Sirmans’ essay “A Frequency: Other Criteria, Or, Something in the Way.” The catalogue reportedly will also include essays by Golden and Malik Gaines.

An artist gives a museum lecture in the guise of Dr. Zira, the chimpanzee/psychologist character from the 1968 movie Planet of the Apes.

The exhibition currently on view at the New Bedford Whaling Museum is a once-in-a-generation opportunity to see a gathering of 25 pictures by Albert Pinkham Ryder and related works by modern and contemporary artists.

The Studio Museum in Harlem’s 2019–2020 Artists in Residence exhibition, This Longing Vessel, was conceived with an uncanny prescience. Decided upon well before the pandemic threw us into a time that has throbbed with longing, the title summons images of empty objects waiting to be filled.