Isn’t There a Little Bit More to Life?

Aristotle famously argues that you do not really know something unless you know its four causes. The four causes are: the material (the component matter of a thing), the form (something is what it is because it shares in a universal form), the efficient (the thing that creates another thing, for example, your parents created you), and lastly the telos (the end or function that the thing was created to fulfill).

Anyone who makes nature films for a living will tell you that it’s impossible to get funding without a CMV.

By Robert A. Haller

One of Turkey’s most poetic and honored film directors, Omer Kavur, died this past May at the age of 61. For years Kavur had been battling lymph node cancer, but continued to make films through 2003 when his “Karsilasma” (Encounter) was premiered to critical acclaim. 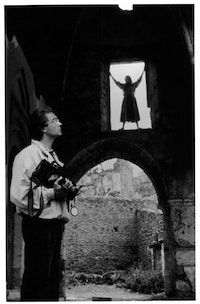 For those of us who were teens in the 1980s and intently followed non-pop “alternative” music—bands like the Minutemen, X, Circle Jerks, Meat Puppets, Dead Kennedy’s, The Gun Club, Sonic Youth to name a few—the historical narrative of “punk” only went downhill after Geffen signed Nirvana in the early 1990s (and coincidently, CDs started to become the norm). Suddenly the music that was “ours” was “new” and all over MTV in what seemed increasingly like a sanitized and commercial form, a feeling likely (or not) shared by younger generations as commercial appropriation of any and all subcultures increases at warp-speed.

The Romance of Revolution

In the eyes of struggling American leftists, Cuba has never looked so good. Its revolutionary rhetoric and iconic images have become a staple of the American urban-chic style. Cuba’s story pops up again and again—you can’t read an alternative weekly these days without hearing of a new indie movie showcasing Cuba’s drive for justice.

Subway Cinema, the group that stages the annual New York Asian Film Festival, began when the last Chinatown movie house, the Music Palace, closed in 1998 (coincidentally, just a year after Hong Kong was handed back to China). With the loss of this outlet for over-the-top genre movies, Subway Cinema took up the mission of providing an antidote to an influx of Asian art films. Despite the charms of Hou Xioa Xian or Hirokazu Kore Eda, at times we still need to abandon the cerebral and return to the catharsis of flying kicks and rubber monster suits.