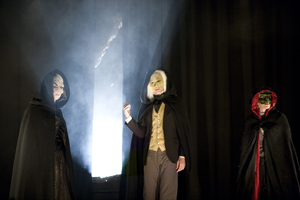 If one had to experience Anne Washburn’s Apparition while lying in one’s “own shit and piss,” as one character laments, one would still be eternally grateful to the playwright.

Under Les Waters’ precise direction, the Connelly Theater’s revival of Apparition stays true to the author’s vision: a series of harrowing monologues and fragmented sketches that explore the boundaries of the spiritual and secular worlds, the known and underknown.

Waters’ courageous choice to have much of the performance in blackout enhances the stillness of the oppressive darkness. “The stillness is more terrible than the pounding,” a character declares, pausing a moment in her unraveling tale of personal dread. And when the stage is occasionally lit, Jane Cox’s brilliant lighting design enshrouds the five nameless characters as they “strut and fret” upon the stage as virtual specters.


It is within the distressing darkness that Washburn’s linguistic prowess shines. Characters speak bogus Latin. There is a horrifying tale in which an apprehensive man stabs his lover and listens to her gasp her last breath without as much as a concern. The fact that it’s performed in sheer darkness amplifies the violence.

The bleak lighting is occasionally augmented by a lone flashlight, a bare light bulb or stark shadows. Under a hanging bulb, actor Maria Dizzia’s character relates a story of perpetual “pounding on her apartment’s door.” As the story progresses, the crescendo intensifies and before Dizzia’s words are extinguished the audience sits warily in uncomfortable horror. Blackout.

In another, and profoundly disturbing, scene, a slick Demon (T. Ryder Smith) presents a paper bag to a “feral” Demon (Garrett Neergaard) who has taken up hiding in backyards of an innocuous suburban neighborhood. Smith, whose slippery reptilian gestures compliment Neergaard’s Neanderthal movements (or lack thereof), in turn cajoles, seduces and implores his cohort to “open the bag.” As Neergaard feasts on a small furry domestic creature, a cagey conversation about babies hovers in the air. Suddenly, Smith amps up the pressure. As the caveman relents and pulls something…from the bag, this scene too cuts to blackout. Just in time.

Apparition’s bag is quite hefty. Buckets of blood, daggers, witches, ghouls, and scattered brains abound. All five actors do a stupendous job telling stories in an enigmatic fashion, establishing and deepening strange moments and heightening the play’s inherent suspense.

With terrific alacrity, Washburn is quite capable of fusing the supernatural with the natural, the eerie with the humorous. Washburn’s ghost stories and frightening tales are cohesively strung together by consistent and poignant allusions to Shakespeare’s Macbeth, otherwise known as the “Scottish Play” to superstitious stage actors. The ensemble, when not slipping into personal reveries or ghoulish figures, play actors preparing to perform this dreaded play—from the comically disjointed associations of actors’ table work, onward. (Though the play cleverly and wisely avoids actually playing out the unnamable play itself.)

While the witches/actors are backstage preparing for their entrance, one cautions the others to watch the “slippery blood.” As the backstage banter prevails, they discover there are four rather than three witches. Or rather, one extra. A fourth wheel. Divinity is lopsided. “What’s fair is foul and foul is fair.”

A séance of sorts, Apparition successfully conjures Banquo’s ghost amongst other horrid spirits and skeletons that lurk within the deeper recesses of the audience’s sub-conscious.

The play’s intrinsic beauty is its inchoate structure, its unevenness. It’s a challenge to identify this piece. Part gothic tale. Part urban legend. Part nineteenth century drama. Part modern comedy. It can be quite elusive.

Although the play is full of sound and fright, the fury, at times, could stand to be more ferocious. Nevertheless, even if you must travel by bus to the East Village’s crumbling but stately Connelly Theater to see it, or be relegated to taking two for that matter, do not miss this esoteric production. It will leave you haunted.

Richard Fulco is a Brooklyn playwright and curator of the Night and Day Playwrights’ Series in Park Slope.

For Your Eyes OnlyFans: Playwright Gage Tarlton on Sex, Confessions, and the Digital Age

Brooklyn-based playwright Gage Tarlton is compelled by the ways in which OnlyFans seems to occupy the eye of the storm, both as theatrical space and tool, for younger people negotiating their lives and identities on the internet.

Will Alexander is a poet, novelist, playwright, philosopher, visual artist, and musician. Among his publications are Refractive Africa (New Directions, 2021/Granta, 2022), which was named a finalist for the 2022 Pulitzer Prize in Poetry and won the California Book Award for Poetry, The Combustion Cycle (Roof, 2021), Across the Vapor Gulf (New Directions, 2017), and The Sri Lankan Loxodrome (New Directions, 2009).

Upon revealing my identity as a playwright at, let’s say, a dinner party, other people will often cheerfully inquire, “What do you write about?” This question always throws me.

Patricia Spears Jones is an African-American poet, playwright, writer and cultural activist. Her fifth full-length collection, The Beloved Community, is forthcoming from Copper Canyon Press and A Lucent Fire: New and Selected Poems (White Pine Press) continues to find readers around the globe.