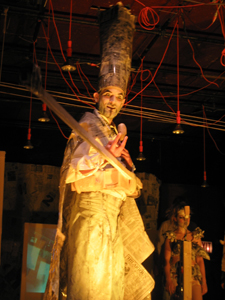 From Two Headed-Calf’s The Life and Death of Tom Thumb The Great. Photo by Brian Lilienthal.

This January, the Theatre of the Two Headed Calf will present their Kabuki influenced production of George Bernard Shaw’s Major Barbara at La Mama.  Co-founded by director Brooke O’Harra and composer Brian Connelly, the company has presented a number of critically well-received performance pieces over the last five years. At La Mama, they did two productions of works by Stanilaus Witkiewicz, Poland’s leading theatrical innovator of the interwar period and one of the strangest and most influential personalities of the European avant-garde.  Recently they composed a beautifully crafted production of Lisa D’Amour’s The Cataract at the Perishable Theatre in Providence.

Two Headed Calf’s aesthetic evolves and coheres with each project.  Their early pieces had lots of monitors and projections, video cameras on sticks and springs and a fragmented dramaturgy that had the audience scanning for meaning on all the surfaces of the actors and set. There are always musicians on the stage, playing along with the actors or providing fabulous textures to play against. The work is often difficult, fueled by the intelligence of the collaborators and a belief in the capacity of their audience to hang in for the ride.  Purposively, the performance atmosphere is generous and welcoming, a relief from the often chilling hauteur of the downtown genius crowd.

Part of this ambience is the result of the blatant enthusiasm that both O’Harra and Connelly still retain for live performance.  It is also, I think, the product of the amalgam of musicians and actors onstage. The work is sent out to the spectators—there is very little of the precious inwardness that often sucks the energy out of performance audiences.  The actors and musicians offer up a lot of entertainment, keeping the dynamic between spectator and performer vibrant and alive. They have developed an avid following, mostly of young downtown devotees of performance and theater, although you will always find a large section of musicians in the audience as well as a generous scattering of elderly scholarly types who know they are unlikely to see the work of Witkiewicz or Chikamatsu at many other venues.

Shaw and Kabuki might seem a strange mix. The company is simultaneously rehearsing Major Barbara and a production of Chikamatsu’s The Drum of the Waves of Horikawa. A work in progress presentation last spring of the Shaw piece at Chashama excited and entertained packed houses. For one thing, the company is not trying to meticulously replicate either Kabuki or a Shaw play. There are no English accents or exotically made up actors. No drawing room languor and no double suicides. Instead, O’Harra and Connelly use vocal, gestural and musical structures inspired by Japanese classical theater to engage and renegotiate Shaw’s text about a millionaire arms manufacturer and his daughter who has joined the Salvation Army. The result is a strange and very affecting environment where Shaw’s elaborate diatribe on Anarchy and Christianity appears refreshingly relevant.

In a recent interview, Brooke O’Harra, Brendan Connelly and Heidi Schreck (who plays Major Barbara) discussed some of the questions brought up by their collaboration.

Roger Babb (Rail):  It’s fascinating how pertinent this text is, how topical. I think that’s because of the ways you have found to support the words.  But there are sections or moments where the words are distorted and elongated, clearly inspired by Kabuki. Are the actors themselves making the decision about which words to distort?

Brendan Connelly: Unlike other pieces that we’ve done, in this play there is a pressure to hear all the words. The actors make their own choices but I find they often choose to distort the word that lands the sentence and is important and that I would choose the reverse. I would rather not have the distortion be on top of the word that you need to hear but on the prepositions, on the through lines, so that the sentence can be understood on a semantic level.  So, we are starting to direct the distortions now, to stress the prepositions.


Brooke O’Harra: We always start from the actor’s first go at it, but then we turn around and react to it, rather than Brendan and I sitting in a room and dictating and strictly composing the distortions. They have been working on this for such a long time and because they are doing both the Shaw play and the Chikamatsu, the actors are able to make strong decisions.

Heidi Schreck: The distortions are developing .We have a vocabulary now.

O’Harra: We have a CD that Brendan brought in. Its Derek Bailey, free jazz guitar. It has some interesting patterns that are like strange speech patterns. The actors work on these scenes where they have to talk with the music. Talk on the music.


Connelly: Its because Derek Bailey’s improvisations are extremely arrhythmic. There’s no steady pulse. The intention is to be on some kind of internal cycle. It’s like inhuman.

O’Harra: But the actor’s have to learn to speak like this. What is physically happening when you speak like this? How do you place that in a text where originally you don’t have music?

Rail: How does that work formal structure work in conjunction with a play whose content is so specific? Are you using that to explicate the text? Or represent the text? Or interpret the text?

O’Harra: I think all of that. I think what you find is that at first the actors are working on a technical level, then they get it in themselves and they make it work for them. It helps them to tell their story. When you have good actors doing this and they do it for a long time it helps to make things clear. To call attention to what the actor is saying.

Rail: In the last twenty-five years the trend has been to eliminate “acting” from performance. What Gary Wilmes, a wonderful actor who often works with Richard Maxwell, refers to as “schmacting.” But this is a Shaw play that is grounded in a kind of realist acting. How do you deal with that?


Schreck: I feel like I really struggled with that at first. I felt I was only doing technical things. After a while I began to understand that, like blocking, these are my rules. I just happen to have a whole lot more of them now. And so it becomes very important to bring my own understanding of the text and my character so as to be able to resist and incorporate the technical stuff.

O’Harra: We concentrate on the structure of the scene but sometimes the actor explodes and needs to know why they are doing these things.

Connelly: I try to resist this offensive idea of underscoring, but you know what, sometimes my favorite part of a performance is: “I’m just going to build this thing from underneath.”  When we strategize a piece it’s always with the idea that that’s not the role of the music, but sometimes you need it.

Connelly: In this play, I’m definitely being descriptive.  I’m trying to bring out as much as possible the way music is used in Kabuki. The guy doing the clacker thing, the hidden percussion, the chorus, there’s a three part thing I’m reinventing and I enjoy referring to that foundation. I’ve found sixty Kabuki musical phrases that are transcribed in western notation. You don’t think of it being notated because it feels so fluid.


O’Harra: Sometimes, no matter what I can get the actors to do, they need support.  I ask Brendan specifically: “Can you support this moment? Can you help me make this moment happen?”


Connelly: I like changing between descriptive functional music and, in the beginning of the play, a nod towards atmospheric, innocuous chamber music that creeps into the play and kind of melds with what the bodies are doing.

Major Barbara runs at La Mama’s Annex theater from Jan 12-29, Thursdays through Sundays at 7:30pm, with additional Sunday matinees at 1:30 pm. On Sunday Jan 29 there is no 7:30 performance. Tickets: $15 at www.lamama.org For more information on The Theatre of a Two Headed Calf, their regular Salon-Saloon series, and upcoming shows, visit them at www.twoheadedcalf.org.

ROGER BABB was for many years a playwright / director with Otrabanda Company. He worked as an actor for Joseph Chaikin, Jim Neu, Julie Taymor, Merideth Monk and many others. He taught at Princeton, NYU, Swarthmore and most recently at Mt Holyoke College.

Barbara Hammer: Tell me there is a lesbian forever…

Centered in the gallery rests a motorcycle, a relic of someone whose absence has been palpable since she left the realm of the living in 2019. Barbara Hammer is the subject of a museum-quality show, albeit in a gallery, curated by Tiona Nekkia McClodden.

Art Historian Barbara Rose talks with Heather Hutchison about her work, the Umbrian landscape, and how natural phenomena inspire her compositions.

In fusing architecture and typography through her signature supergraphics, Solomon incises the elegant 1902 Prairie-style mansion housing the Graham Foundation galleries with the sharp precision of Modernist graphic design and the stinging irreverence of a carefully crafted and dexterous wit.