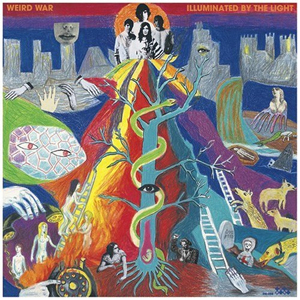 In strange and sinister times like these, it’s not surprising that America’s funkiest indie-rock band has a name like Weird War. Based in Washington, DC, literally beneath the flight path of Dick Cheney’s private helicopter, this is a band that, according to lead singer Ian Svenonius, “creates music based on the furious rejection of the current cultural narrative—music based on a hatred for imperialism and transforming that hatred into energy.” But despite being brutally aware of what’s brewing in the cauldron down the street from them, they’re remarkably adept at creating music that not only makes you think, but flat-out gets down in the process. Their songs shine a spotlight on clandestine worlds in which big corporations and the government utilize mind-control to get what they want: “There aint nothin’ wrong with you; the mental poison messed up your mind,” they proclaim on the track “Mental Poisoning.” Yet just because the powers that be are a buzz-kill doesn’t mean Weird War will cancel the party. They might be deep thinkers, but they’ve also been known to whip the Mercury Lounge into a fervor.

Weird War has seen a revolving cast of members come and go, but they seem to have settled on a permanent lineup for their current album, Illuminated by the Light (Drag City). Svenonius and bassist/vocalist Michelle Mae have been playing together since their days in the band Make Up. Later, joined by the virtuoso guitarist Alex Minoff, they became Scene Creamers for one album before losing the rights to that name to a French graffiti collective. From there they became Weird War and, after going through nearly as many drummers as Spinal Tap (including emergency percussion work by Minoff on the album If You Can’t Beat ’Em Bite ’Em), finally secured the talents of stickman Sebastian Thomson. With this quartet ensconced in the studio they deliberately spent more time working on Illuminated by the Light than they had on previous projects, a choice that resulted in their finest overall production to date. This is a band that is telepathically linked by their mutual interest in astrology, their life in DC, and their innate ability to rock, and it shows.

The addition of Thomson on drums has had a major impact on the rhythm section. He and Mae deftly anchor the sound and infuse it with a funk foundation that the guitar and vocals careen on top of like a trampoline. Regarding Thomson’s importance to the new sound of the band, Michelle Mae asserts that “of all of our ten drummers, he is the only one who understands it scientifically—at a subatomic level, you might say. Perhaps that’s because he’s a physicist.” Or perhaps it’s because his total command of the drum kit has allowed Mae’s bass work to flourish beyond its already dynamic capabilities. On the “Hot Stuff”–like “Girls Like That” on the new record, the groove is so dirty and hook-laden that it makes me wanna buy a white suit with over-sized lapels. It’s serious funk.

Influenced by P-Funk’s Eddie Hazel as much as ZZ Top’s Billy Gibbons, guitarist Minoff squeezes tremolo lead lines from his vintage Gibson Firebird that burn rubber through the landscape, and tasty support fills that add undulating atmosphere to the songs. How he remains so relaxed on stage while delivering this kind of guitar noise is beyond me. At a recent gig at The Hook in Red Hook, I was further stunned to find him running the merchandise table. This is a player who laid down nearly every lick on 2004’s If You Can’t Beat ’Em in one take and absolutely tore it up, and he’s selling CDs at the back of The Hook. But Weird War has such a strong DIY ethos that they’re intimately involved in all levels of the process of making their records and touring. They even illustrate their own album covers. When I went to meet them at one of their recent shows they even dropped me off at the subway in their van. Above and beyond the call of duty, people.

Singer Ian Svenonius is a vocalist of surprising range. He will sing/speak or croon during a section of a song and then, as if his hair has caught fire, erupt with a falsetto yowl that could rattle a cage around the block. His ability to screech and yelp without losing his voice during a show ranks with up there with Prince, Black Francis, or the Violent Femmes’ Gordon Gano. He’ll keep a tight reign on his emotions throughout the verse but then, for one explosive moment, he will erupt before he can put the lid back on. His narrative tales are so compelling you can imagine listening to them without music, like a book on tape. Svenonius has claimed that he has “no musical ability,” yet his vocal timing is uncanny. He smoothly jumps between hilarious and deadly sincere, and it’s often difficult to guess which is which. Staring right through the crowd, he’ll deliver a deadpan diatribe about losing his girl “to a Motorcycle Mongoloid”; then he’ll suddenly do some sort of back-peddle or mysterious martial arts maneuver. Then back to composure. He’s like a preacher or shaman with highly unusual dance moves—a Vegas-quality lounge-lizard–cum–Village coffee-shop philosopher with great physical command of the stage. “I was really inspired by the highly stylized dance moves of the early sixties,” he says, citing such lost gems as the Frug, Monkey, Jerk, and Hitch-Hike.

Most of the band harbor some sort of protective feelings for DC despite how strange it might seem to those of us living outside of the capital. “Living in DC is special,” says Mae. “DC needs us. Everyone has abandoned the city. The political situation does permeate the city with a negative vibration, but if everyone leaves, this part of the earth will fall into the pit of this disgust. We have to stay here and uphold the love vibe.” When asked about the effect that the current dark political climate has on his work as an artist, Svenonius says, “These are exciting times because the prophecy of so much art has come true. The punk period could be seen as a kind of prophetic screed, considered cartoonish at the time but now a matter of fact: a police-state/corporate monolith with the most sophisticated mind-control weapons working twenty-four hours a day.” If that sort of environment is conducive to songwriting, then the records should continue to come out at a decent clip. “This country has become a Prussia/Sparta–style armed camp with a particularly freaky occult security-intelligence arm, and it’s just getting worse,” Svenonius says. And yet the band is still there in DC—their version of DC—where creative work can still be produced in the shadow of “creepy complexes and bunkers.” Their terrifying surroundings clearly prevent the band from getting too carried away by their more lighthearted pop impulses. “Playfulness and humor are central to almost all good music,” Svenonius says, “but it must be wed with an almost arrogant sense of mission or zeal—this fragile paradoxical tension is what makes the most interesting pop music, I think.”

Through it all they manage to make upbeat music that stirs up a crowd and is a hell of a lot of fun to listen to. For an indie band they have more in common with Sly and the Family Stone or Talking Heads then Neutral Milk Hotel or the Silver Jews. Weird War know how to break past the gloom and enjoy themselves. They don’t wallow in the mire. When they take the stage this month at the All Tomorrow’s Parties festival in London, the British crowd will get a taste of one of America’s most underrated and enigmatic rock bands. After playing in so many different groups over the years, Mae says this about her current place in music,

“Weird War is like breathing. Other projects were prelude to the kiss. It’s been an evolution of sorts, and this feels like a state of finesse, although there may be higher levels, who knows.” If there is, then I’m sure it’ll be funky.

Illuminated by the Light is out now on Drag City. Ian Svenonius’s book, The Psychic Soviet, will be out next year, also on for Drag City. www.weirdwarworld.com