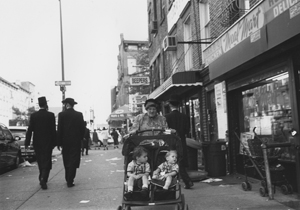 Fist-fighting, beard-pulling Orthodox Jews. Brotherly break-ins at the local synagogue. Williamsburg hipsters hooked on something besides Ms. Pac Man, calling the throw-down “a hell of a story.” Here’s a tale—Shakespearian in drama—of feuding Hasidic brothers, sons of a grand rabbi with worldwide spiritual power, fighting over succession in a neighborhood otherwise spared from fraternity bar brawls.

The power struggle between Aaron and Zalman Teitelbaum—the sons of Grand Rabbi Moses Teitelbaum, head of all Satmars and a prominent figure in Hasidism—took an ugly turn in October this year when police broke up a melee of hundreds of members from the two opposing factions of the Satmar congregation outside a Williamsburg synagogue. The brawl reportedly erupted when Aaron followers forced their way into Zalman’s temple. Twenty-six arrests were made and seven summonses issued.

The feud dates back to 1999 when Grand Rabbi Moses appointed his youngest son Zalman to lead the Williamsburg congregation. Aaron, Moses’s oldest son, was already head of the Satmars in Kiryas Joel, a Hasidic village in upstate New York. The nomination divided the Satmar Empire, and factions built up around the two contenders.

In Hasidic custom, the heritage traditionally goes to the older brother, so from Aaron’s corner the power split was seen as an attempt to make Zalman grand rabbi. From Zalman’s corner the split seemed a natural solution to a congregation that had grown too large for one man to control. Satmar is one of the largest Hasidic communities in New York City, and as a Hasid consults his rebbe on every issue from business plans to family worries and match-making, how would one man handle around 40,000 members in Williamsburg and 17,000 in Kiryas Joel, the Zalman side argued.

The contest over the dynasty—which includes control of the Satmar synagogues; cemetery; charitable, educational and religious institutions; and corporate name—has resulted in several rounds of litigation. The 91-year old grand rabbi’s authority has been questioned and his well-being has been brought before the court. There have been rumors of judge-shopping and allegations of bribery.

Hasidim on Rodney Street and Lee Avenue in Williamsburg disagree over what’s actually at stake. Mike Gross, 31, a cell phone salesman from Boro Park, says he understands why they are fighting. “You are talking about millions and millions of dollars", he says. Moses Green, 25, a factory manager and member of Satmar, says it’s just a little fuss. “Just two to three people,” he says. Emanuel Kohn, 35, who works in real estate, says there’s “nothing going on.” If there’s something in the works, “it’s not a power struggle. It’s about ideology,” he says.

“I don’t personally believe that any of those brothers send out people to fight with their hands. It’s their people,” says Gross of the row that erupted at the Williamsburg shul. Abraham Wiss, 36, a computer technician from Boro Park, differs. “It’s directed by the sons,” says the Satmar follower.

Many Hasidim would like the media to stop writing about what’s happening. “Why do you need to write about it?” says a woman shopping for meat at the Satmar kosher market. “[Fighting] is common when you have a royal chair,” she says.

Another woman, who describes herself as a “follower of the father,” says women don’t get involved. “I don’t have a clear understanding of what the fight is about,” she says. “They are close, and they love each other, and they fight.” In her experience, such matters are common among family, she says. “They are having a little fight, or a big fight, as brothers or sisters.”

Up Bedford Avenue, nearer the $2 Pabst Blue Ribbon signs and the hipster thrift stores, Hasidic life seems far away, but rumors of the feud circulate. Michael M., 24, a bookstore worker on Bedford Avenue, recalls having heard something about the Satmar feud—or maybe a different one. The police had to break up a fist-fight over a plaque in memorial of a rabbi, he says. “The other side was upset that the rabbi was said to be dead.”

“I thought it was kind of funny,” says Michael. “It seems like a silly thing to fight about … but I guess that’s what wars are started over.”

“I don’t want to minimize it,” says John Stevens, 30, a Brooklynite and furniture refinisher. “Obviously if they get into physical violence, it’s important. But in my own world it’s petty.”

“It’s kind of the classic story,” says Irisa Ono, 23, a laboratory worker having coffee on Bedford. “It sucks. Everybody wants to be in the spotlight,” she says, adding that at the same time, “it’s entertaining.” Like much of the crowd mingling on Bedford, Ono knew few details of the feud, but she found it hypocritical “because they preach righteousness.”

“I thought they were Italians,” says Joe Mazzara, 36, a deli counterman on Driggs Avenue. A customer told him about the brawl, and it sounded to Mazzara as if they were “fighting like Italians.” It’s natural that they fight, he says. “If you can’t solve it verbally, you result to the hands.”

Joel Teitelbaum, the founder of the Satmars, came to America from Europe after World War II, and led the congregation until his death in 1979 when his nephew Moses Teitelbaum took over. The recent feud “is about what power struggles have been about for millennia,” says David Pollock of the Jewish Community Relations Council. Since Moses is too old to lead the congregation, the sons are fighting over the succession.

It’s hard for non-Hasidim to understand the Hasidic life, says Pollock. Hasidim are known for their strict adherence to the Torah and their rejection of modern liberal ideas. “Their hats and coats are virtually unchanged since the 18th century,” says Pollock. “Most are insular. They will not watch television or use the internet, although they will use cell phones and BlackBerrys, fearing that outside influences would distract them from a life of study.”

Ultra-Orthodox Hasidim distinguish themselves from non-Hasidic ultra-Orthodox Jews by believing in a charismatic leader, he explains. Each Hasidic linear follows a specific leader, and the rebbe is the central figure in a Hasid’s life. Hasidim rely on their rabbi for many life decisions, and the choice of rabbi is vital. “You need to trust the rabbi,” says Pollock.

“What these episodes do is give people a glimpse, although a distorted one, of Hasidic life,” says Pollock. “People see the unfortunate underbelly,” he says, of a group that is “basically not violent. It’s charitable.” But news from the insular society only slips out when there’s something as dramatic as violence in the street.

Earlier this fall a Brooklyn judge told the feuding brothers that it was ultimately up to Dad to decide who the real Satmar is, and according to Pollock this will probably be settled in elections. “It’s not going to be a religious choice. It’s going to be a choice between personality and style. Whoever is more charismatic will end up winning,” says Pollock.

“People are going to vote with their feet,” he says. Not their fists.

Jenny Clevstrom is a writer who lives in Manhattan.

Each of these books presents a master class in craft while also providing a perfectly honed narrative that draws the reader in and won’t let go.

When seven-string guitarist Álvaro Domene and alto saxophonist Álvaro Pérez met in Madrid, Spain in 2011, not only was the “same level of passion and hunger for real, creative, and exploratory high-level collaborative music” immediately evident, says Domene, “having the same name, rather than being confusing, to us was kind of a strange cosmic coincidence because it’s not that common of a name.”

Love, loss, pain, desire, hope: these are the strongest emotions that we know. Throughout life, one or more is our constant companion. When the Venetian Renaissance painter Titian (ca. 1490–1576) received his greatest commission in 1550 from Philip II, the future King of Spain (r. 1556–1598), he was clearly involved in thinking through the resulting human problems.