Dede Alpert, a native of Bay Ridge, Brooklyn, shakes her head as she looks at a comic comparing the Israeli-Palestinian relationship with apartheid in South Africa. The comic strip depicts a conversation between the narrator and an African-American person. “To Palestinians Sharon is a butcher, a modern day Dracula,” it reads. “Fenced out, bricked away, sealed off, barred from the lands where their fathers tired for thousands of years. Reminds me of what happened in South Africa – running folks off their own land and then boxing them off on little pieces of land.”

Alpert points to the comic, clearly offended: “It mentions Sharon, Zionists, but nothing about Yasser Arafat and all that he did,” she says. “I don’t think he did very well for his people.” 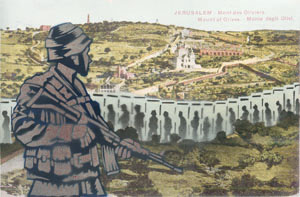 Alpert, 74, is at an art exhibit titled Three Cities Against the Wall at ABC No Rio on the Lower East Side. The project has been put together by 56 artists in Ramallah, Tel Aviv, and New York City, and is taking place simultaneously there. Each artist provided three pieces, one for each part of the world. They include paintings, sketches, photographs, videos, posters—just about any means of expression were welcome.

As the name suggests, the exhibit protests the separation wall under construction by Israel in the occupied territories of Palestine. The barrier is part wall, part fence. Most of its 670 kilometre (420 mile) length is made up of a concrete base with a five-meter-high wire-and-mesh superstructure. Rolls of razor wire and a four-meter-deep ditch are placed on one side. The structure is fitted with electronic sensors and has an earth-covered “trace road” beside it where footprints of anyone crossing can be seen. Parts of the structure consist of an eight-meter-high solid concrete wall, complete with massive watchtowers. The sections of the wall around Jerusalem block off Ramallah and Bethlehem and run through the village of Abu Dis.

The huge mural above the main entrance to ABC No Rio, painted by Seth Tobacman, one of the exhibit’s organizers, depicts a giant snake entwined in and around a city, crushing it in its vice-like grip. A poster hanging inside the gallery above the main door shows a man and a woman standing with their arms around each other. The caption reads “Yes, I fuck an Arab!”

The artists are united in their opposition to the wall, but the exhibit draws varied reactions from viewers. “This whole exhibit is almost like Arab propaganda,” Alpert says. “Without the wall there was terrorism. I think the wall is terrible. But maybe it was necessary if Palestinians couldn’t control terrorism. I guess [the artists] don’t have to be fair and show the other side—the terrorism in Israel with innocent people being killed.”

Sliman Mansour, an artist and curator who helped put together the Three Cities exhibit in Palestine, says Israel can find other means to deal with the situation rather than cut off Palestinians from their land. “It’s not so simple,” he says. “Israel can build the separation wall along the Green Line,” the border before the 1967 war.

Ruty Chotzen, who lives in Herzlya, a town near Tel Aviv, is sympathetic to Palestinians who have been affected by the fence, but doesn’t agree with Mansour’s suggestion. “We need a border between us and Palestinians,” she says. Chotzen, 63, is Israel’s country representative for the International Education and Resource Network, a non-profit global network that enables teachers and young people to use the Internet and other new technologies to collaborate on projects.

Ehud, Chotzen’s husband, says: “In some places, the distance between Israel and Palestine is only 12 to 15 miles. This helps supporters of terrorism to move freely and the wall is needed to keep them out.” He adds: “In some areas the wall passes inside the towns and that must be very difficult for the Palestinians living there. But it is more difficult to live under violence constantly.”

The artists don’t believe that suicide bombers have been curbed by the barrier. Fawzia Reda, one of the organizers of the exhibit and creative director of Cultural Connexion, a U.S.-based non-profit organization focused on promoting Arabic and Islamic arts and cultures, says “the wall has ignited more hostility. If you see it from the point of view of Palestinians, this was not the life they were promised after 57 years.”

Reda, a former cultural advisor to the U.N. in Cairo and to the International Committee of the Red Cross in Geneva, is emblematic of the history of the region. She was born in Cairo during the first Israel-Arab war to a half-Lebanese, half-Palestinian father and a half-Turkish, half-British mother. She believes in the forbearance of the Palestinians and refers to a portion of the fence she saw in Abu Dis in East Jerusalem: “It has verses from the Koran which say ‘Be patient, be understanding, the truth will be revealed to one who is patient.’”

Alpert, however, is still not so sure that the barrier will end the region’s conflict. She points to a sepia-toned photograph of the fence, beyond which one can see rows of olive trees on a sloping hill. “That’s the Mount of Olives. I’ve been there,” she says.

“I don’t think I’ll be here when they resolve it finally.”

Megha Bahree is a writer based in Manhattan.

Workers don’t sacrifice their time and energy on a whim to agitate for better working conditions. As is happening to so many other workers today, the adjuncts are fighting because their backs are against the wall.

Tom Motley is a cartoonist, illustrator, and educator. His publications include Tragic Strip (a monthly strip in the Brooklyn Rail), The Golden Ass, The One Marvelous Thing, and contributions to the indie anthology Cartozia Tales. He teaches cartooning at the School of Visual Arts and illustration at Pratt.