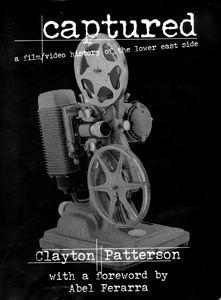 Captured (Seven Stories Press, 2005), edited by Clayton Patterson, is a summary of the Lower East Side’s recent history. A tome, a scrambled and occasionally repetitive though deeply illuminating (and loud, play it loud) record of the characters and social conditions that have given way to a crucial tradition of independence and innovation in film and video. The book is oriented more toward experimental film, and focuses mostly on those who remain underground, though mainstream crossovers such as Tom DiCillo and Vincent Gallo are oft mentioned, and Steve Buscemi and Jim Jarmusch each have chapters.

The book avoids the problems of revisionist delusion common among journalists who seek to invent a mythology to encompass the history of the scene—Paul Morrissey is quite vocal about this, claiming there never was a “scene” or community among filmmakers in the ‘60s—by having no editorial summary or analysis whatsoever. The dozens of submissions and interviews are a noisy mass of differing and concurrent voices.

Clayton has done his best to include all the characters who have come and gone since the ‘50s, along with those who continue to advocate and produce work. Many of the 112 chapters are written like magazine columns, and often include the writer’s contact information, if not a self-promotional blurb, which facilitate the book to serve both as a reference and a basis for further dialogue.

Some of the autobiographical chapters are surrounded by reflections on the individual by others involved, which serve as good background for those not of the in-crowd. Others, however—for example Henry Jones or Henry Flesh, or Bradley Eros’ two collaborative verse essays come, in a sense out of nowhere, yet they continue to color the oral history of the scene. Miraculously, the story is told—and in a relatively linear narrative, if one commits to plowing through the whole thing. Most of the voices and tales are vastly entertaining. Some interviews are presented in raw transcriptions, which permit even the closest reader to scan, though they suggest an intentional charm, and with repetition of similar opinions and facts from one interview to the next the book becomes a powerful cross-referencing tool.

Ruth Galm, in her chapter on the Millennium Film Workshop’s history, brings up Stan Brakhage’s stubbornness around labels: “For Brakhage, “Underground film conjured up images of a Victor Hugo character traipsing through the sewers of Paris; “experimental” sounded like people were just puttering around; and “avant-garde” sounded too pretentious and French.” Jonas Mekas is someone who believes in the humanist responsibility of all art forms, and stresses the limits of an auteuristic obsession with one’s own life and experience. So while he avoids labels in film, he prefers the title of “filmer” to “filmmaker” (he invented the film/video diary)—and when asked what the most serious thing about experimental film is, he proclaims that the only serious thing about experimental film is that it isn’t serious. He has been a dedicated advocate in New York City for more than fifty years.

The pioneers of Lower East Side film point to a variety of influences, and of course don’t always agree on them. Paul Morrissey rails at what he calls Cassavetes’ misuse of improvisation, and calls his product “heavy-handed, soap-opera emotional crap.” He points out the spontaneous narrative that was formed in Ron Rice’s The Flower Thief as a better source of inspiration. But Mekas was a strong supporter of Cassavetes in his early Village Voice columns, and within an anthology of Film Culture (the journal Mekas headed for 35 years), edited by P. Adams Sitney, is a piece written by Parker Tyler that, in 1962, gave more credit to John Cassavetes than Robert Frank and his beatnik-nostalgia film Pull My Daisy: “Concentration camps were authentic; so what if this film was authentic.” He criticizes the film for refusing to acknowledge its roots: “The grab is as big as the bag.” Cassavetes was more gracious and comfortable with his homage, which predated the ethos that Jim Jarmusch fulfills when discussing his own insight—that of “Strummer’s Law”. “No input, no output,” stated the late great Clash front man.

Jarmusch’s film Ghost Dog was a pastiche of various cultures and narratives, both from old pulp films and from the neighborhoods of lower Manhattan. “[I took] things from disparate places,” Jarmusch says, “genres like hit-men movies and crime movies, and Samurai movies and philosophies…[mixed] eastern things with hip hop… living in the Lower East Side was a garden of that.”

In the mid-80s, as the early signs of gentrification made their way through the neighborhood, native filmmakers found new challenges to shooting on their turf, as residents were confronted with Hollywood. Steven Spielberg’s production of Batteries Not Included, the plot of which followed other-world beings as they saved an elderly couple from tenement eviction. Real tenants responded with graffiti: “Spielberg Go Home” along with “Not 4 Sale.” A year later, the Tompkins Square riot.

When the Square was reopened post-riot, the band shell—which had served as an important stage for artists and dissidents, particularly in the ‘60s—was removed. Laws were changed, a curfew was instituted, and filmmakers on the independent level had a tougher time getting permits. Rik Little reminisces in his chapter about sneaking onto Hollywood sets in the neighborhood and shooting around them, for example the set of Die Hard with a Vengeance, on which Republican actor Bruce Willis was heckled by residents as he rode a bicycle through the neighborhood.

Clayton’s work as a video artist and documentarian paralleled his involvement with the local political/social strife, which climaxed with the hopefully-not-forgotten riots in August of ‘88. The tape he made of the incident is famous, as is his 90-day-jail sentence and subsequent legal battles. Clayton claims in his essay on the video that he was outraged by its seizure not because of a loss of opportunity with regards to legal action, etc, but as an action of censorship and seizure of his work of art, the unique and elegant nature of which he explains in detail. After all of this, with continued police harassment, he writes from the present day that he is leaving politics to “get back to having fun and chilling out.”

Politics or not, Clayton is an ebullient and admirable champion of the special grassroots cosmopolitan tradition of the Lower East Side, advocating equally in his writing for Orthodox Jews and Hare Krishnas, skinheads and drag queens. He criticizes admirable artists such as Leon Golub, who lived in the neighborhood but he claims rarely went out to absorb it for use in their art. Golub, however, produced art that was deeply informed by politics, and was in fact prosecuted for taking his beliefs to the street.

Alan Steinfeld, who wrote that walking into the Lower East Side was like walking into a movie full of ‘50s beat characters, had the following idea about the artist/poet’s role, quoting E.E. Cummings: “Poetry is being, not doing.” Perhaps an ethos to apply to Clayton, who as an artist may find it most essential to be in touch with the community and maintain a connected lifestyle; “being,” as opposed to the preoccupation of “doing” something politically or otherwise, not specifically related to art.

Those who are remembered in the mainstream independent film history as bit players are memorialized here, for their massive presence on the scene. Rockets Redglare, for example, who passed away in 2001. Passages on him remind us of the notable Hollywood cameos: Big, Desperately Seeking Susan, and paint a larger-than-life character who struggled with addiction and the crime underworld he was born into (when he was a child his mother was shot and killed by the police) but worked in countless independent features.

Cult/fetish erotica players who shined in Richard Kern and Nick Zedd’s Cinema of Transgression productions, such as Annie Sprinkle and Lydia Lunch, tell their stories. And actress Casandra Stark Mele’s has her account of why she left the scene: she points to the break from “underground aesthetics” and ethics rather than the sexploitation. When the sub-genre first broke its manifesto was certainly felt strongly. To quote Nick Zedd from the chapter he wrote: “To transgress is to resist…expanded cinema is a form of live film…a movie can be a situation.” But the situation soon became such that young cutting-edge filmmakers couldn’t finance their projects without a little corporate freelance work on the side—for example Richard Kern shooting for Penthouse.

In memoirist/performer Jennifer Blowdryer’s chapter on Kern, she claims that he could have continued directing in the ‘80s if he wanted, after Fingered—his ’86 notorious film starring Lydia Lunch that John Waters allegedly calls the “ultimate date movie for psychos.” “Of course we all could’ve done a lot of things back in the ‘80s,” she writes, “but just couldn’t. The ‘80s…were not lavish spend-fests for everyone”. She also shrewdly points out that the mainstream media is grateful when artists coin their own terms, and has learned to scoop them up so fast that there’s no time for a movement to get going.

Then the cable shows emerged, bringing video performance to public access in the East Village. “Every time you turned on [the] TV you saw someone you knew. We were all famous for fifteen minutes!” Says Jeffery Cyphers Wright, referring to the third generation New York School, which came together in ’76 in the shadow of Warhol’s factory. This kind of instant local recognition was new for the area, and distant from Paul Morrissey’s era, who claims filmmakers never even recognized one another.

Enduring in the present, through all various trends, are figures like Taylor Mead, for whom several written appeals to the city—included here—been made to prevent eviction from his Lower East Side apartment. Robert Cavanagh claims that Mead blames his continued poverty in part on the modest promotion done by Jarmusch for Coffee and Cigarettes, the crown scene of which includes a lovely existential exchange between him and painter/actor Bill Rice.

Theatres such as the Pioneer at Two Boots continue the tradition of offering the avant-garde to the community in an informal setting. The Collective: Unconscious continues to host video performance events, parties, and parades. And the Anthology Film Archive stands strong at 2nd and 2nd tonight.

Camp: Notes on Fashion can’t seem to make up its mind about what Camp is. The wall text that opens the exhibition puts us on notice: “This exhibition might raise more questions than it answers: ‘Is camp gay?’ ‘Is camp political?’ And, ultimately, ‘What is camp?’”

Piotr Szyhalski is a Polish-born, US-based artist. Trained in Poland as a poster designer, Szyhalski has been living in Minneapolis since 1994, where he teaches at the Minneapolis College of Art and Design. In 1998, Szyhalski began Labor Camp, an ongoing artistic framework that transcends medium and encapsulates his layered practice of performance, musical scores, printed ephemera, pedagogy, and media art.

The exhibition Hypnose (Hypnosis), curated by Pascal Rousseau for the Musée d’arts in Nantes, is a chronicle both compelling and comical. Although submerged in a stream of spiritual consciousness tied to artistic principles of universal connection, the exhibition also flirts with certain kitsch clichés, most notably the iconic hypnotic-disc that by spiraling supposedly sucks suggestible cerveaux down a somnambulist whirlpool.

Winter Jazzfest 2020:
Groove is in the Heart

Rock and roll is Black music. White musicians play it, and play it well—like every other music it belongs as a practice (not an object) to those who make it with sincerity—but it began as Black music. And as this double-bill in the cozy kitsch-chic of The Sultan Room shows, it's at its best in the hands of Black musicians. That's because rock, at its best, is about shit.