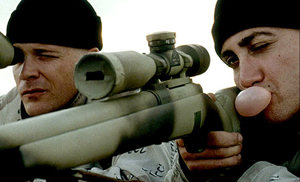 Art and culture finds itself in a place beyond deconstructionism. We’ve entered The Age of Quantum Irony. The mainstream continues to inflate the pop postmodernism trend of the 1990’s to its bloated red giant of a conclusion. Hollywood never fails to cannibalize its truest love, itself.

Consider Jarhead, released four weeks ago into a box office abused by fellow deconstructors Domino and Kiss Kiss, Bang Bang. Though a better performer and a better movie than the other two, Jarhead suffers from similar problems in its basic construction. It’s far too aware of itself to be aware of anything else, including the lush work of cinematographer Roger Deakins (D.P for Oh Brother, Where Art Thou? and The Shawshank Redemption among many others) as well as the talents of Jake Gyllenhaal, Peter Sarsgaard, Chris Cooper, and post-Oscar Jamie Foxx. Under the didactic authorship of Sam Mendes (American Beauty, Road to Perdition), we’re led into the morally ambiguous world of Anthony “Swoff” Swofford’s diary of his service as a scout/sniper in the U.S. Marine Corps during the first Gulf War. Screenwriter William Broyles Jr. served as a marine lieutenant in South East Asia before authoring Brothers in Arms his memoir of a soldier’s return to postwar Vietnam in 1984.

The U.S. Marine Corps is a unique subculture, inspiring curiosity and devotion by those both within the culture and without. The danger married to the aesthetics of Mameluke swords and dress blues compel young marines and wannabes alike to the Corps’ bloody and textured history. Young Tony Swafford signs up, bewitched by the legacy of his father, a serving Marine during the Vietnam War. Even beyond legacy, he’s motivated by the story. The War Story. “Four days, four hours, one minute. That was my war. I never shot my rifle.” Although our main character tells us how gung ho he is to see “the pink mist,” of a headshot, we would never know if he didn’t tell us directly. The camera takes a position of a cynical outsider rather than a brother-in-arms. By steering toward the middle in an attempt not to offend, director Mendes shortchanges both sides. The First Gulf War was called the MTV War by many in the press who watched rockets explode through night vision lenses. Sam Mendes’ war is The Seinfeld War: A war about nothing.

In reviews and related press materials, the film has been called, “one soldier’s story,” which is not true. Marines are not soldiers. Go ask a marine. Soldiers serve in the army. Marines train to go in first before all the others. Inside the culture, marines can call themselves Jarheads (the origins of which have been alternately attributed to both their helmets and their haircuts), Leathernecks and Devil Dogs. Iraqi soldiers have called them “Angels of Death,” for their preternatural ability to sweep over the land and bring deliverance. This is what a marine is in Iraq.

This is not what a marine is in Hollywood.

Alternately, reviewers refer to Jarhead as “a war movie without the war.” This is also not true. Jarhead has a war: Gulf War One. A war where tens of thousands of marines fought their way across an oppressive desert to Baghdad. This is not their story. This is about the benchwarmers. From a box office standpoint, it’s a slam dunk: a war film in which we never see our boys fight or die. It has all the emotional beats of the standard war story, but none of the painful emotional residue or pink mist. The red and the blue go home happy and strut out of the theatre to the driving march of Kanye West’s “Jesus Walks.”

Jarhead never really coalesces. The constant, unnecessary deconstruction won’t allow it. The most egregious example sees the marines assemble in a theatre to watch Francis Ford Coppola’s Apocalypse Now. The marines cheer as the helicopters blast Wagner and destroy the peasants along the coastline. This breaks a fundamental and often unspoken law of commercial cinema: never show a scene from a better movie than your movie. It’s not unlike the prohibition of showing characters eating on screen. The audience might get hungry and stop paying attention. A similar phenomenon is at work here: We get hungry to see a real film.

Swofford and Broyles construct a solid narrative exploring issues of brotherhood and masculinity against a backdrop of technological progress: Tank corps, airstrikes and offshore missile attacks overshadow a ground force left to walk the desert .Though the environment impacts the troops severely (as evinced by Swoff’s Nirvana-fueled dream sequence), the audience never feels the same way. Mendes cuts between training, home, and the rear with such casual regularity that no emotional connection is possible to the terrain in which the war is fought. The landscapes are lush, but Jarhead never commits to an idea or an image in any meaningful way. The editing intentionally mirrors the “hurry up and wait” aesthetic Mendes intends to capture, but induces the side effect of neutralizing the drama of the battlefield and the down-tempo barracks scenes.

Apocalypse Now isn’t the only film inspiring Jarhead. Sam Mendes should hand half of his paycheck to the Kubrick estate. Jarhead can’t decide if it’s an homage or remake of Stanley Kubrick’s Full Metal Jacket. Both deal with the Marine Corps domestically and in their respective war zones. Both have tough as nails, misanthropic drill instructors. Both feature dissociative voice-over narration by the central character. The third act of both films revolve around a small team of marines attempting to remove a single enemy from a distance and in both this is the only clear picture of a living enemy we ever see. (Though Jacket depicts the Tet Offensive, we only briefly see the perpetrators at a distance or on the move. The only identifiable Viet Cong shown is The Sniper at the end of the film). Both protagonists have best friends (Troy in Jarhead and Rafterman in Jacket), who crave a taste of real war, or think they do.

Full Metal Jacket together with Kubrick’s World War I morality play Paths of Glory (showing in a crisp, restored print at the Film Forum Dec. 2nd – 8th) illustrate the potential the war genre holds for telling stories of psychological depth and lasting artistic value. Mendes as primary author dodges his responsibility to create a new war idiom for a new war. Jarhead’s thefts are direct and obvious, wrapped in a glib and winking self-awareness. Jarhead is Full Metal Jacket spayed to appeal to the biggest opening weekend possible. A difficult masterpiece of source material—Full Metal Jacket—has been aped, then morally reduced to a mall epic, leaving nothing to digest.

A less well known French film that explores similar territory is Clare Denis’ Beau Travail. Released in 1999, Travail tells the story of an officer in the French Foreign Legion also stationed in the Middle East along the Gulf of Djibouti. Rather than xeroxing the first half of Full Metal Jacket, Denis uses the training sequences to create moving sculptures of her Legionnaires as they exercise or race through obstacles in the exquisite desert light, the men becoming compositional abstractions within the frame. The troops of Beau Travail never fire on the enemy and spend their time training or dealing with the oppression of the inescapable mundane. Yet plot and character hold the film together and build drama. A film about soldiers trapped in routine and unable to engage an enemy doesn’t have to be a film in which nothing happens. Denis casts a wider net than Mendes, finding inspiration in sources farther reaching and literary: Beau Travail re-imagines Herman Melville’s novel, Billy Budd in the European armies stuck in the contemporary Middle East.

BAM recently hosted an evening of Full Metal Jacket: 20 Years Later, including a screening and a question & answer session with the film’s star Matthew Modine, who was promoting his own “war” diary, a collection of journals and photographs from the yearlong shoot of the Kubrick film. When asked why he chose to release this book now after 20 years he responded by saying, “Pictures never stop developing.” After 20 years, the images continued to accrue meaning and change over time. When applied to the genre of the war film, it correlates to Francois Truffaut’s quote, “there’s no such thing as an antiwar film.”

Of note: Swofford offers the exact same Truffaut quote in Jarhead, but doesn’t appear to know that someone else said it first.

pear ware: I love you, I think

When a three-person collaborative becomes a two-person team, the connections that bonded the whole need to be reevaluated. Through I love you, I think , Mika Agari and Carol Hu begin the process of discovering what it means to continue a collaboration in the face of notable absence.

To Gina With Love

Sam Kahn pens a love letter to playwright Gina Gionfriddo, charting her career, inner world of her plays, and the influence she had over his life and writing.