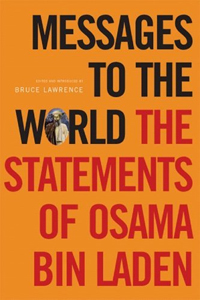 I remember once reading a very short excerpt in the newspaper of one of Osama bin Laden’s publicly released statements and being surprised by how clear he sounded. It was about a year after the 9/11 attack and bin Laden said that he was fighting America (and the American-dominated UN power structure) because we support Israel at the cost of Palestine, and because of our constant intrusion into the political life of countries throughout the Muslim world. He said he would fight us until we were out of Arabia and his Muslim brothers could have their dignity back.

Reading this statement left me hungry for more, not because I wanted to join the jihad, but because after 9/11 there was mass emotional pandemonium in our trying to understand what had happened. Bookstores sold countless copies of the Quran, and people thought that if they read more about Islam, they’d understand why the towers fell.

Very few people separated Islam from bin Laden’s interpretation of it, and we heard little unbiased intellectual analysis of the politics of al Qaeda. So much of what we knew of this leader of Islamic militancy and terror reached us after too many interpretations and translations to make any sense at all. The lack of direct access to his speeches and rhetoric is remarkable considering how bin Laden has continued to affect our world.

Now, more than four years after 9/11, Verso books has boldly published Messages to the World: The Statements of Osama bin Laden—a collection of bin Laden’s public statements culled from audiotapes, faxes, rare interviews, and web edicts. Islamic scholar and Duke University Professor of Religion Bruce Lawrence introduces bin Laden to us as a kind of mad poet who uses simple, emotionally appealing prose. Lawrence then guides the reader by explaining references to the Quran and political events bin Laden is reacting to.

Reading bin Laden as he is positioned here within the varied context of Arabic scholarship and history reduces him from the mythical figure that he has been, and allows us to see the cleverness of his arguments as well as the flaws in his message. He very coolly relates the modern history of US involvement in the Muslim world and calmly incites his followers to violence, retaliation, and vengeance. He states logically and manipulatively that while the killing of innocent people is wrong, Americans are not innocent since they freely choose leaders “who drop bombs on us in Afghanistan, destroy our homes in Palestine, … and are the last ones to respect the resolutions and policies of International Law.”

While some of this criticism is humbling—we now detain people without trial and have committed acts of torture— bin Laden reveals the simplicity of his fanaticism when he denounces American society as “a debaucherous land of fornicating disbelievers,” citing Clinton’s “mistake” as one of many pieces of evidence, when he outlines his liberation theology in returning all Muslims to the law of Sharia. Beyond complete separation from the West and the rest of the global economy, bin Laden offers no other vision of what his followers will do after the fight is over, or if the US does pull out of the region.

The reason to read this book, as Bruce Lawrence argues, is to know thy enemy, to know thyself, and to ultimately defeat him. Aside from the loss of innocents on both sides of this bitter and endless war, reading bin Laden makes it clear that his followers will never find what they are looking for under his guidance.

Mridu Chandra is a filmmaker and writer living in New York.