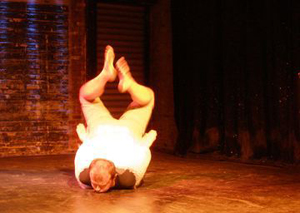 It seems at times that there are no fresh tracks to be made in dance, or in any of the arts. No matter where you step, at least one footprint can be found. Dance Theater Workshop’s Fresh Tracks series stands in defiance of this jaded view; the audition-based program aims to ferret out new choreographic voices. Sometimes, it even succeeds.

November’s installment featured the usual grab bag. For those who missed it, DTW has announced an important expansion; the six participating artists have been granted residencies at the theater. Watch for their new works this spring. In the meantime, six short takes on the present future of dance.

Green jumpsuits ending in short-shorts, Isabel Lewis and Erika Hand cut big, aggressive patterns across the bare stage. Chris Lancaster and George Lewis, resplendent in their own little red outfits, sit off to one side, playing electric cello and guitar. Distortion, blues riffs, maybe a touch of death metal? Arms ending in fists pump as, in unison, the women take lunging steps, purposefully accomplishing nothing. It’s like grown up girl scouts for people who hated girl scouts, mundane and tragic all at once. I want to be on their team.

She takes us in, we take her in: sober eyes, the woman in white, dark nipples beneath thin fabric. She occupies a small space. It starts with one arm, undulating like seaweed at high tide. She regards it. The movement builds, spreads. She lunges forward on one leg, pivots like a compass creating a circle. Her arms are still working, fluttering and jerking as if controlled by invisible strings. She’ll never get off the ground this way. The activity peaks and abates. At the end, a small smile — she’s not serious anymore, so we know it’s over.

“Is this where I audition for the role of the angry black gay male performance artist?” Paule Turner asks. Must be, as he proceeds to play the part. I’m hoping for a deconstruction, but am served more standard fare: Turner, naked, “I am not worthy” written on his chest, makes love to a white woman, a gun, himself. A quartet of thugs roughs him up; one of them, as luck would have it, has “GOD” written across his beefy tummy. Another stalks around, tells us “Blame the dude that wrote the fucking thing.” Indeed, and the choreographer too.

Wires snake across the stage, purple, blue, orange, black. Boys and their toys—electronic gadgets, speakers, a laptop, all clutter the stage. But that’s just fine, no fast moving feet are going to get tangled up. It’s a study of stillness: hunched over, kneeling, cross-legged, sprawled beneath a speaker like a crime victim waiting for a chalk outline. They are absorbed in their music, we are absorbed in their absorption. The sound grows until I can feel the vibrations through my sneakers. My ears are getting nervous.

John Wyszniewski’s humor competes with earnest political protest; a bared back asks (demands?) “RESPOND” in this short, none-too-subtle solo about detainee abuse. Perhaps subtlety is wasted in war, but Wyszniewski’s enigmatic little hops and utilitarian gestures speak louder to me than his words. Still, it’s an exciting glimpse. Wyszniewski is a wonderfully vulnerable performer, and it’s hard to go wrong with David Bowie and a bubble wrap straitjacket. Diving back into the cardboard box from which he initially crawled, the choreographer tosses out handfuls of red ribbon. Party favors, blood and guts – the images vie with intriguing unease.

6. Jessica Morgan, You Are Gone Goodbye

Four women, two spotlights, birdsong. I already know where this is going. Stonefaced Natalie Green, Kate Martel, Jessica Morgan and Sarah White dance well, but the interlocking patterns and slumping forms are too safe – the type of competent, predictable “craft” the Joyce Theater lives for these days. Their bared backs also boast letters: “V,” “IT,” “IS,” “ME.” They walk on tip toes, torsos hunched over, letters revolving like a bad day at the office for Vanna White. “VISIT ME,” I assume, but I like the garble better.