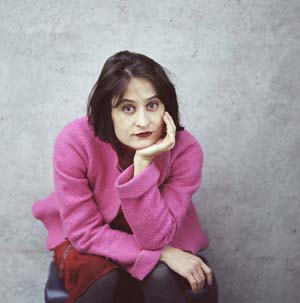 German-born, Berlin-based choreographer Sasha Waltz is often compared to the reigning queen of dance theater, Pina Bausch. But Waltz would rather critics align her with New York’s downtown dance scene. I’ll do both. Waltz’s Körper, performed at BAM in 2002, consisted of dance theater’s requisite fragmented vignettes in the vane of Bausch. Dancers recited monologues on the price of plastic surgery, a man skied down a large black wall, and the work clamored on into an apocalyptic end. Perhaps the most stunning segment of Körper, meaning body in German, came at the start with scantily clad dancers squirming within a large plexi-glass box. Impromptus (BAM, Dec.)signals a slight change of tone for Waltz and here we can better see New York’s influence on her work, particularly in her use of contact improvisation. Set to classical music, this lyrical, ardent work focuses on the duet. The set consists of two large parallelograms, slightly skewed like two tectonic plates colliding. The dancers move from plane to plane, running and twirling. In one duet, a man and woman both fold into each other and unfurl, lunging and leaning, but never quite splitting apart. It’s as if they are struggling to maintain their equilibrium (or their individuality) amidst the intoxicating effects of love.

After 40 plus performances of the Nutcracker, I can only imagine that the dancers of City Ballet delight at the advent of the company’s Winter Season. Beginning January 3, the tree and trimmings come down, the snow is swept away—almost—that damn snow gets everywhere—and out comes Swan Lake, the stalwart Balanchine leotard ballets, and the new choreographic blood of Christopher Wheeldon. You can get standing room tickets for $12 the day of a performance. Sure, you’ll be in the nose bleed seats, but during intermission sneak down to the orchestra. Or, if you want to try and take in the whole season, join the Fourth Ring Society for $20. As a member, you’ll get tickets for $15 and a pre-performance talk. www.nycballet.com