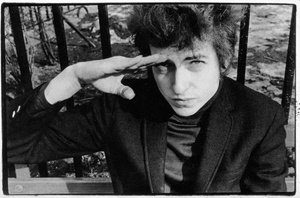 From the cover of The Bob Dylan Scrapbook

Studio A: The Bob Dylan Reader, edited by Benjamin Hedin, is a collection of literary and journalistic essays, poems, and speeches by Dylan scholars, rock critics and connoisseurs. Like the beat paperbacks and pocketbook existentialism collections that Dylan might have carried with him as a young escapee to New York, Studio A is a portable key to a secret world, not dark yet but getting there. One in which intelligent rock criticism tried to match the intensity of the music it critiqued with the power of the written word, and writers from all walks of life tried to collectively understand the progress and patterns of musical forms by dipping into their own knowledge of the hodgepodge of 20th century American culture.

1961 marks the earliest writing on Dylan with the tough love of folk music aficionados in journals such as Broadside and the Little Sandy Review. As Dylan’s music moved beyond the politics of the folk scene, established music critics such as Robert Shelton, Nat Hentoff, Ralph Gleason, and Robert Christgau all took turns with the mystery each new album offered. Many of the contemporary essays are chapters taken from books devoted to Dylan, such as David Hadju’s Positively 4th Street, Christopher Ricks’ Dylan’s Vision of Sin, and Greil Marcus’s Old, Weird America. The concluding essays focus on Dylan’s return to form in his two last albums, Time Out of Mind and Love and Theft, and point to the release of the Bootleg Series as a missing link in Dylan’s musical oeuvre. Studio A is neither a definitive thesis on Dylan’s output nor a manifesto of fan worship. It is a collective project that builds its own strength from each writer’s commitment to meditate on Dylan’s own language as a touchstone.

Thecollection provides an even tighter framework if read in the context of Martin Scorcese’s documentary No Direction Home, as well as the film’s lavishly designed companion volume, The Bob Dylan Scrapbook 1956-1966, constructed from the premise that Dylan and his fans can share the same imaginary “scrapbook” of ephemera culled from publicity materials and handwritten lyrics. The writing is sparse, giving the bare facts of Dylan’s early musical climb from a Little Richard-imitating high school student to a Greenwich Village folk scene wunderkind to the poet-prince of rock and roll’s intelligentsia. Like the documentary, The Scrapbook ends with the 1966 motorcycle accident, an event that creates a clean break between a more easily assessed youthful genius and the less transparent, if more mature, mastermind of latter years. More than anything else the Scrapbook is indicative of the force of fetishistic objectification that goes hand in hand with late 20th century popular culture. In Dylan’s youth musical heroes were not raised to the status of Byzantine icons—rock and roll was still a young enough art form.

It can be hard for the uninitiated listener to appreciate Dylan’s music precisely because of all the peripheral products (magazine articles, press conferences, publicity photographs), which have gathered a force independently of the actual albums. For New Yorker writer Alex Ross, the myth of Dylan outweighed any personal assessment of the music. It was only after Ross was sequestered with the album Highway 61 Revisited in a foreign country that he was able to arrive at his current state of sublime enthusiasm for the man and his music. His essay, “The Wanderer,” is a contemporary profile of Dylan as the ultimate rock and roll conundrum, “Historical enough to be the subject of university seminars, yet ‘preferring to’ wander the land playing to beery crowds.” Ross sees Dylan as a latter day prophet touring the world playing to an eclectic, if not rowdy, crowd of young devotees and their ex-hippie counterparts. For the recent concerts that Ross attended he has observed that it is not the traditional hits of the early folk years or Blonde on Blonde’s radical electric songs, but the 1974 masterpiece “Tangled Up In Blue,” from Blood on the Tracks, that fully reaches the audience with its intimations of an eternal link between writer and listener. Dylan sings, “We always did feel the same, we just saw it from a different point of view”; the “it” in question is the music itself. It is precisely the self-contained directness of this poetic statement of singer-audience unity that strikes right to the heart of Dylan’s enduring and transcendent popularity. The romance of Dylan’s relationship with his audience can be understood as a family affair—one in which hurt feelings and forgiveness become essential components of an unconditional love.

The difficult task of critically assessing Dylan’s erratic ‘70s and post ‘70s work, with the notable exception of Blood on the Tracks and Desire, is a tangible weight upon the writers in Studio A. In an essay for the long forgotten Creem magazine, Clive James compares Dylan’s evolution of a “sprawling indiscriminate imagination” to Rimbaud’s steady movement towards purity of form. James focuses his analysis upon Dylan’s so-called early 70’s slump period, and reserves the title “full-blown genius” for the 19th century poet. Greil Marcus’s unconventional review of the 1970 album Self-Portrait, for Rolling Stone, is an attempt to address the problem of Dylan’s choppy genius through its unique form. In a credible recreation of a stoned conversation of high-minded rock critics, the article tackles the failure of Self-Portrait to live up to its maker’s earlier albums. It includes quote snippets from Dylan, “Not all great poets—like Wallace Stevens—are great singers, but a great singer—Billie Holliday—is always a great poet,” and references Self-Portrait’s homespun quality with its chorus of opinions.

Marcus concludes his review with a personal reading of the song “As I Went Out One Morning.” In his opinion the song is about America’s exploitation of its own myths of freedom in the maligned historical figure of Tom Paine. Marcus’s own interpretation indicates a greater truth: Dylan’s songs (and albums) are like open texts that can be read in whatever manner we choose allowing meaning to proliferate unstopped as long as the music exists in the world. “The point is that Dylan’s songs can serve as metaphors, enriching our lives, giving us random insight into the myths we carry and the present we live, intensifying what we’ve known and leading us toward what we never looked for while at the same time enforcing emotional strength upon those perception by the power of the music that moves with his words.”

In a speech given at Dylan’s Rock and Roll Hall of Fame induction, Bruce Springsteen recounts his first encounter with the song “Like a Rolling Stone” on a car radio. His immediate response was that ”it somehow sounded simultaneously young and adult.” The haunting conflation of ancient wisdom with a childlike, naive virtuosity is a hallmark of Dylan’s. The interplay of a youthful creativity smoldering within the age-old framework of traditional music is perhaps best articulated in Greil Marcus’s close reading of The Basement Tapes. Marcus’s writing is a triumph of rock and roll excavation, using the 1967 recordings that Dylan made with The Band in Woodstock, to discuss the songwriter’s unique method of revitalizing older forms of music. In a discussion of the song “Lo and Behold”, he writes, “What results is not a reflection of a real life for the singer anymore than it is for the listener, but a vision, a lo! and behold! Of possible life—lives the singer and listener may have ahead of them, to realize or lose, lives that might already be behind them, deprived of oblivion only because of what the singer does with the song.” As a writer, Marcus matches beat-for-beat Dylan’s own intensity of language, trying to articulate what Dylan calls “the language of not speaking falsely.”

As a scholar of Romantic and Modernist poetry, Christopher Ricks uses the lens of literary criticism to articulate the virtuosity of Dylan’s complex rhyme patterns. Like many of the writers collected in Studio A, Ricks’ involvement with Dylan stems from a private obsession, in this case with the unique poetics of his verse. In the essay “The Force of Poetry,” Ricks believes that Dylan’s songs are structured around seemingly simple rhyme patterns and colloquial clichés that the singer revitalizes to create new meanings. For example the cliché “take it to heart” becomes, in the song “I Threw It All Away,” “take it to your heart,”—a slight re-wording that lends the lyric the force of a commanding plea from the singer to the listener. In the song “I Shall Be Free,” the phrase “seen better days,” becomes “I see better days and do better things,” a burst of optimism preceded by a troubadour’s declaration of strolling, singing and “being drunk alla time.” In this deceptively straightforward lyric, Dylan “eases the cliché from a dim past into a bright present,” personalizing a world-weary form of speech. It is in careful appraisals such as these that the art of literary criticism reaches its highest goal—not as academic method to be haphazardly applied to pop music, but as a sensitivity register for better understanding forms of creativity.

Both Studio A and the Scrapbook allow us an entrance point into understanding Dylan’s own premonition of a musical inheritance that is as much derived from his own focused collecting of music as it is from a sublime feeling of not being able to control the force of meaning that is brought forth through his songs. The last lines of the Scrapbook fittingly address this issue of the artist’s sense of manifest destiny. In Dylan’s own words from a 2004 interview he states that he is doing exactly “what I believe I was put here to do.”

According to the writers in Studio A, Dylan’s unique form of homage is indicative of his own understanding of the impermanence of the past and its need to be re-written within a unique musical hybrid. In Dylan’s words he was around to see “the end of the traditional people,” old blues and folk singers who in 1963 still populated the stages of Newport, and could be found in the record stores of Greenwich Village.


Walter Benjamin meditates upon the evolutionary aspect of the narrative tradition, from ancient oral parables, to 19th century novels, arriving at the conclusion that transcendent truth might be dead, but the half-life of its star offers a far-reaching glow. “The art of storytelling is reaching its end because the epic side of truth, wisdom, is dying out…gradually narrative is removed from the realm of living speech and at the same time is making it possible to see a new beauty in what is vanishing.” It is this vanishing world of the storyteller that Bob Dylan inhabits, makes his own, and brings back home to us.

MC Hyland is the author of two full-length books of poems: THE END (Sidebrow 2019) and Neveragainland (Lowbrow Press 2010), as well as over a dozen poetry chapbooks/artist books. She is the founding editor of DoubleCross Press, and produces scholarly and poetic texts, artists’ books, essays, and public art projects from her research on poetry, mediation, and public space.

The works surveyed range from conventional depictions of the artist-at-work to products of more audacious hybrid studio practices. Jay DeFeo’s photos capture her highly sculptural paintings in various stages of completion, providing a straightforward view into the artist’s process.