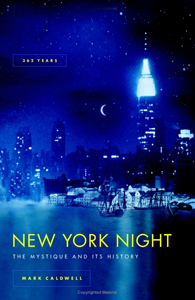 “All the animals come out at night,” Robert DeNiro’s famous malcontent, Travis Bickle, declares in Taxi Driver. His New York is equal parts danger and grime, a thoroughly decrepit Times Square serving as the epicenter of vice.

Others, from poets to club kids, have held the New York night as a source of comfort and inspiration, and Mark Caldwell captures the gamut of sentiment in his masterful New York Night: The Mystique and Its History.

Even today, with most of the metropolis awash in artificial light, nighttime in New York retains a romantic element—a thrilling unease in the face of possibility. For Caldwell, a professor at Fordham University with a magnificent sense of the city’s history, darkness represents “the real source of a city’s magic, and the strongest force for its survival…the permanence of human desires and the indefatigability of human will.”

He recounts myriad episodes—drunken escapades, sexual adventures, criminal rampages, permutations of all three—that unraveled in the wee small hours of the morning, but it would be a mistake to regard New York Night as merely a chronicle of events that took place at nighttime. Caldwell’s intention is far more ambitious, amounting to an exploration of New York’s complex relationship with all things primal and unknown.

“Hello darkness, my old friend / I’ve come to talk with you again,” Paul Simon crooned in “Sounds of Silence,” that quintessential song of New York. Caldwell summons that friend back from the 17th century, when New Amsterdam—then a fledgling Dutch settlement—was but a glowing speck situated precariously on the edge of an island inhabited by Lenape “savages.” Taverns served as the primary gathering places for settlers who fought viciously against Indians and the wilderness they inhabited, and Caldwell meticulously reconstructs the experience of a “night out” in a Manhattan that, for all intents and purposes, was a rugged country outpost with scant hallmarks of urban life.

But by the early 19th century, with the American colonies enjoying their nascent freedom, New York began to adapt the characteristics of European counterparts like London and Paris. “Dionysian Manhattan,” as Caldwell calls it, was growing aware of the varieties of pleasure while also becoming “a metropolis of migrants…passing, joining, parting,” a city for strangers in the night for whom either love or death could prove a glance away.

As the city grew, there would be moments both celebratory and shameful. Foremost among the latter would be the Draft Riots of 1863, which left more than a hundred New Yorkers dead, most of them blacks who bore the brunt of anxiety over the rising tensions between North and South. The city continued to mature after the Civil War, and by the turn of the century, its nightlife was certifiably complex. Pleasures had diversified from drinking in dusky bars into a coterie of concert halls, boxing venues, theatres of the high and low variety, burlesque shows, thinly-veiled meeting spots for homosexuals, and all-purpose entertainment complexes like the Hippodrome on 6th Avenue and 43rd Street. Meanwhile, the burgeoning immigrant populations and persistent inequality in economic conditions gave rise to the violent Bowery gangs immortalized by Herbert Ashbury in his Gangs of New York.

The five boroughs united in 1897, creating a sprawling city with an incandescent needle—the slender island of Manhattan—at its center. Caldwell captures the watershed moment with considerable grace: “Night became a theater of appearances and quick escapes, lonely crowds, wanderers, strollers, and predators—spinoffs of a burgeoning and diversifying population, the proliferation of new things to do after dark and the technologies that invented them, lit them up, and transported their patrons.” Thanks to Edison, the city could now remain lit all night and whatever remained of the unknown would retreat further, lingering in outer borough enclaves that retained their bucolic feel.

Caldwell is especially notable in his treatment of Greenwich Village, a sedate enclave of Italian immigrants that suddenly gained popularity with bohemians seeking low rents and escape from the strictures of proper society. He describes how the shabby tenements of the Village alternatively served as home to eccentrics, beatniks, writers, homosexuals and (finally) arrivistes content to feed off the parade. For Caldwell the Village is “half garden of the soul, half tourist trap, with everything from delicatessens and restaurants to bars and apartment buildings constantly on the swing between invisibility…and the dread article in Time Out or the real estate page of the New York Observer that unleashes a shopping, munching, or nesting horde.”
Caldwell concludes New York Night with a walk from midtown to the Battery, the entire history of the island appearing before him like “a ghost from a deeper world still living but unwisely forgotten.” He has succeeded in writing a book that is exhaustive and opinionated without being either tiresome or bombastic and, as a result, a sizeable portion of that lost terrain is reclaimed in this essential volume.

With Here comes the night, an exhibition of eight acrylic paintings now at Spencer Brownstone, Jule Korneffel declares an infatuation with twilight atmosphere.

Payal Kapadia’s A Night of Knowing Nothing

In the opening scene of Payal Kapadia’s Oeil d’or-winning documentary A Night of Knowing Nothing (2021), a group of students at the state-funded Film and Television Institute of India (FTII) dance exuberantly against the backdrop of a giant screen on which a film plays.

In the late spring of 2021, as life in the United States was sputtering back to life after the pandemic, Cliff Fyman’s Taxi Night was a vivid reminder of the way the talk had been going full throttle before everything came to a crashing halt.