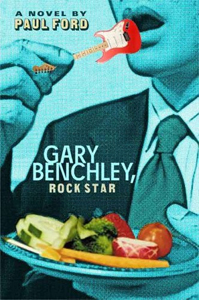 Every generation, a certain city or neighborhood becomes the capital of America’s counterculture. Whether Concord in the mid-19th Century, Greenwich Village in the early 20th century and again in the early 60s, Haight-Ashbury in the mid to late 60s, or Seattle in the early 90s, these places attract the restless and the dissatisfied, and they also give form to the furtive dreams of the rest of the country. In Paul Ford’s novel Gary Benchley, Rock Star, it’s Williamsburg circa 2004.

Where earlier bohemias yielded a Henry Thoreau, a Eugene O’Neill, a Bob Dylan, or a Jerry Garcia, this one offers Gary Benchley, native of Albany, recent college grad, and hipster with an obsessive interest in indie music (in the kind of general, all-embracing sense that label implies). Where other bohemians might have concerned themselves with radical politics or literary revolution, Gary has one purpose: “to rock.” (His number-two goal is a negative: “No more data entry.”) This is a young man who has beatific visions of the Flaming Lips’ Wayne Coyne, prays to “the god of indie rock, which is Lou Reed,” and has fantasies about Cat Power. Even a visit to his mother in the hospital, where she is suffering from breast cancer, can’t drive music from the forefront of his mind: “I … took off for Philly, feeling bleached and frail. Luckily, I had a Polyphonic Spree CD to keep me company. I wasn’t going to take any chances on, say, Dead Can Dance, or Coil.”

Benchley leaves Upstate New York to pursue his aspirations of indie grandeur in New York City. After enduring the kind of humiliations that crashing with friends entails, he settles down in Williamsburg, enjoys the nightlife, temps by day, and eventually assembles a four-piece band that attempts to fuse prog rock and indie pop (although Ford is unclear on what any of this is supposed to actually sound like). The novel charts the career of this outfit, from practices to gigs to studio recording to a cross-country tour—each of its members, meanwhile, feeling the pull of other obligations.

Central to Gary Benchley is that classic conflict between two Americas—not between red and blue, although that is here, and supplies some of the less interesting drama, but between the hip and the square. It’s the struggle between those who see America as a place to explore the limits of freedom and those who want to make some money and live in relative comfort until they die. What makes this conflict so interesting is that those on one side frequently envy those on the other. So for Gary Benchley, rock star, the temptation to become Gary Benchley, middle manager, is relentless. And New York City in the early 21st century is a far harder place for a young bohemian to scrape by without a trust fund. In fact, Benchley’s first priority upon arriving is to find himself a day job that will, paradoxically, allow him to pursue his rock-star dreams: “It turns out that this is a terrible time to rock, but a terrific time for data entry, because all of the companies that fired all their people and outsourced to India and Ghana still have work that needs to be supervised here. Yes, never working in data entry was my #2 goal. But my choice was: hypocrisy or Albany. I chose hypocrisy.”

Gary Benchley himself is a much more interesting character at the start of the book, when, in passages like that one, his callowness is fresh and funny enough for us to want to follow his inevitable mishaps. Eventually the book settles down into fairly routine description, and rather methodically fills us in on Benchley’s doings. It might help to know that it was originally a series of fake blogs posted on the website themorningnews.org. Much of it has the rote quality that characterizes your typical entry. And like a blog, the novel seems extremely of the moment, with references to Craigslist, Gawker, Pitchfork, The Daily Show, and the Honda Element, among other up-to-the-minute name-checks. In fact, considering the prominence Ford gives to the world of blogging in his narrative—Benchley’s on-again/off-again girlfriend is a blogger, and Benchley himself attends a blogging party—it’s a wonder he didn’t make use of the form as a narrative construct, the way 18th- and 19th-century writers used letters or diaries. It’s a missed opportunity that might have taken the best advantage of the novel’s shortcomings. Still, Ford has given us one of the few novels to depict the Williamsburg scene at a time when it still matters. One day, after the rents have priced out all the people with enough free time to be creative, we might need a book like this to remind us what it was like.

The eleven oil paintings (all 2022) that comprise Dark Dreams at Alexander Berggruen Gallery, the artist’s second solo exhibition in New York, depart from the accepted conventions of Surrealism and forge ahead, past the threshold of dream and sleep.