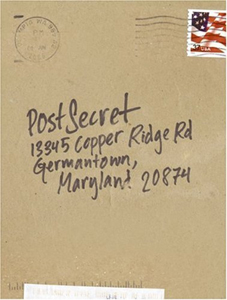 Kept secrets are like time-bombs, silently ticking away in separate mental vaults, waiting to detonate and make trouble. For those that can’t find a tangible listener, there’s always the internet; catharsis has become as easy as clicking a button. Confessional sites like Grouphug.us or DailyConfession.com are the agnostic answer to atonement, as we can now log on, type in a sin, and send it flying into the digital atmosphere. The only problem with these sites is that they lack interactivity; the release in telling a secret comes from knowing that someone has heard it. Fortunately for all would-be cyber-confessors, Frank Warren is listening. His website, PostSecret.com is more than a virtual confidant, it is a massive art project that endeavors to bring people together through their fears and fantasies. In reality, the site has little to do with the internet; every confession posted on the blog began as a physical 4×6 postcard sent to Warren’s home address in Maryland. Hundreds of people send Warren their creations each week and he personally reads each one, guarding a total catacomb of over three thousand unnamed admissions of guilt, joy, and shame—quite a responsibility for a forty-year old suburban businessman. Warren, who began the project in 2003 as part of a short-term amateur art exhibition, recently told NPR that he compares his mailbox to a “beehive”: he encounters messages of both sweetness and pain every day.

The extent of that beehive is on now display in PostSecret: Extraordinary Confessions from Ordinary Lives, a hefty coffee-table book that chronicles the history of the project and features glossy prints of many never-before-seen postcards.

The appearance of the book is both exciting and problematic; readers can now revisit the confessions and draw connections between them, but there are also consequences in committing the postcards to print.From the site’s launch, Warren chose not to maintain an archive of the secrets, rendering the virtual confessions ephemeral and equal. This quick turnover serves as a buffer against the increasing amount of criticism the site receives as it becomes more popular. London’s Guardian, for example, deemed the site “burlesque,” calling attention to the performative aspect of the public confessions, and even Warren has admitted that many of the postcards he receives may not be altogether honest. While the nature of the project must encourage some exaggeration on the part of the confessors—their first goal is to make enough of an impression on Warren to be chosen for his site—the rapid rotation of images on the site weakens the impact of any submission in search of long-term glory.

Publishing the images lends more weight to this criticism; Warren has not only chosen to immortalize certain postcards in his book, but also to vary their sizes and order, creating a kind of artistic hierarchy. One submission featuring a vintage photograph of a female torso and the words “I envy the willpower of anorexics” takes up an entire page. The power of the confession is heart wrenching, but it would also be easy to argue that this postcard was meant to shock the viewer, at least enough to end up on the website, and eventually, in the book (Warren frequently posted updates on his book deal to the site, so senders became aware of this possibility).

PostSecret also incorporates several humorous confessions, like one that’s a clever play on the poetry of William Carlos Williams: childlike doodles of hearts and stars surround the words, “I ate all the blueberries, and they were delicious.” A savvy sender would doubtless be aware that Warren tends to publish this type of silly, intellectual humor; did this sender pick William Carlos Williams because he knew Warren would get the reference? Were there really any blueberries in the first place? It is not difficult to imagine each potential confessor as a shadow of Emma Bovary, inventing little sins so that he or she may stay longer.

The most noteworthy aspect of the book then, is that Warren directly confronts this criticism by selecting a great number of confessions that directly address the public nature of the project. One shows a small, wrinkled envelope and pencil sketch of a shapeless man with the words, “I don’t think I’m interesting enough to have a secret…” On another, someone writes, “I have so many secrets, I don’t know which to send in.” The self-awareness of these cards actually confirms the site’s original purpose. After all, one of our most common secrets is a longing for recognition, to rise above the din of the crowd. In reproducing these postcards, Warren proves that while certain secrets can connect us, it is the desire to have a secret to tell that is truly universal.

The sincerity of these confessions will continue to remain ambiguous, and they should. Like a biblical text, the literal truth of the postcards does not matter as much as their ability make us reflect on our own capacity for understanding. The final image in the book is a bright Crayola rainbow and the words, “We are all connected,” a sentiment that is not only the endpoint of Warren’s project, but the beginning of our own. Everyone has a secret, and perhaps PostSecret will encourage its readers to turn to each other and share something real. Until then, there is always a blank postcard and a mailbox in Maryland.

Laura Dern,
“A Woman in Trouble”

David Lynch’s Inland Empire (2006) is perhaps the filmmaker’s most inscrutable film. In a new monograph on the film, Melissa Anderson contextualizes the movie as a simulacrum of the themes both Lynch and actor/star Laura Dern have taken on throughout their careers.

Cabin fever is consuming us. We’ve all gone a bit stir-crazy. Like many before the pandemic struck, I had plans, but they were dashed in February. Or was it March? The months dissolve into each other. I was supposed to touch down in “the Garden Island” on Hawaiian Airlines in mid-November, flying into Līhuʻe from Oakland International Airport. A Hawaiian November would have been quite unlike a San Franciscan autumn, when the Bay’s chill blankets the city and its coastline.

Chitra Ganesh: A city will share her secrets if you know how to ask

At first glance, this expansive exhibition of fiber and textile-related works heartens the viewer as gently and naturally as a loose button welcomes needle and thread.