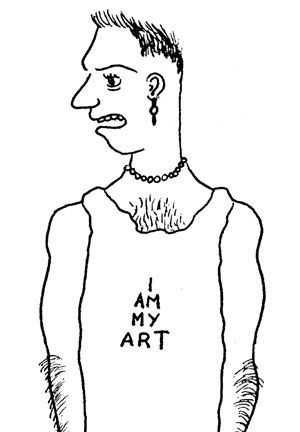 Cartoons by Sean Landers; Visiting Artist by Amy Sillman; Mug by Bill Adams; Blow Up by Michelle Segre; The Searchers by Miranda Lichtenstein. All published in 2005 by Regency Arts Press, which was founded in 2003 by publisher Lauren Wittels.

This series of back-pocket-sized books of drawings and photographs ranges widely, from backbiting satire of the art world to images of pursuit of the sublime. In between there are cats, castles in exploding fields, and a gentler but even sadder take on the art world.

The biggest (or rather thickest) of the books is Cartoons by Sean Landers. If Robert Crumb drew in a sparer, non-narrative style and was obsessed with the periphery of the art world, he might come up with something close to this, an acid view of the double-talk, game playing and constant disappointment that most artists face trying to break into the big time. Landers hits the nail on the head—no one would admit to being a model for these drawings.

Amy Sillman’s Visiting Artist is another, much shorter series of cartoon drawings, this one a story of the art world’s disappointments from the inside, a woman artist’s brief teaching gig at an un-named college. The humor here is more humane—the style and tone are closer to James Thurber’s wry wit than Crumb’s all-out assault. Sillman does kind justice to the loneliness not just of an artist, but of anyone trying to communicate and be understood.

Mug by Bill Adams is 11 drawings of cats, some fully rendered, some half-appearing out of clouds of blue ink squiggles. It’s his four one-eyed cats that I kept coming back to, in part because they’re so well drawn that they seem real, with the dignity of cats that I’ve known. While the other books in the series are bigger than the sum of their parts, in this one the parts stand out.

Michelle Segre’s Blow Up is the most enigmatic of the series, nine intensely drawn, mostly abstract single-page line drawings that all turn out to be details of the tenth drawing, a double-paged drawing of a medieval looking structure, part tower, part something else, emerging from a half-abstract field of hills and rocks and empty spaces somewhere between a Van Gogh field and a topographical map. The detail blow-ups reveal the intricacy of Segre’s drawings—this is a book you could look into again and again, still finding something new.

The Searchers by Miranda Lichtenstein is a series of 12 photos, each of which directly or by implication shows a search for transcendence. It fits with the other books in that there’s a cumulative weight to it—none of the individual images meant much to me, but seen together, in sequence, they add up to something bigger. And that’s what we’re all looking for, right?

Win Clevenger lives in Manhattan and is working on his first book.

Win Clevenger lives in Manhattan and is working on his first book.

Motherwell’s extensive oeuvre is divided into a variety of separate media that includes painting, drawing, collage and printmaking. While he experimented with mixed media approaches throughout his career, he tended to ascribe specific aesthetic and technical values to each of these areas of practice, as Katy Rogers noted in the catalogue raisonné of his drawings.