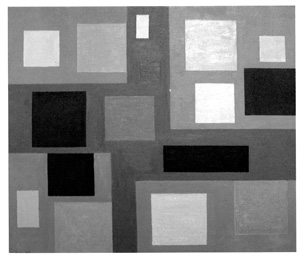 Alice Trumbull Mason, "No.1 Towards a Paradox" (1969). Oil on canvas. Courtesy of Joan T. Washburn Gallery.

This show gathers paintings, drawings, and prints by Alice Trumbull Mason, her daughter Emily Mason, and granddaughter Cecily Kahn, turning scarce space into lively, intimate space. Kahn and her mother are productive today—both had solo shows in New York galleries in 2005—and a good deal of their work here is very recent. With each artist’s work so tightly juxtaposed, the correspondences among the pieces jump out. Thus, what becomes a more interesting method of looking is teasing apart the ingredients that each artist turns into her own idiom.

The show gives a concise account of the trajectory of Alice Trumbull Mason’s career, in which she dabbled in biomorphic abstraction, then more geometric construction, in both print and paint. She studied with Gorky and admired Mondrian, exploring the example of each throughout her career, which she maintained nearly to her death in 1971. Among the first American proponents of abstract art, she was a founding and active member of the American Abstract Artists, a group that helped to ensure the solvency of abstract painting in New York City, the movement’s cradle in America.

As a child, Emily Mason encountered Abstract Expressionism in its irascible golden age through her mother and her milieu. Since then, she has excavated one of its deep-seated veins, unearthing mild and corrosive ore alike. Though she paints with an Abstract Expressionist’s abandon, Mason has also been tenacious in her study of abstraction, as the present examples demonstrate. In her earliest work on view, “Bee Loud Glade” (1959), patches of impasto across the surface are de Kooning-esque. The influence becomes less pronounced as she forged her own style over the years. What proves central to Mason’s work is how she imparts the canvas with an inextinguishable vitality through color.

According to the accompanying catalogue, Cecily Kahn, whose artistic career began long after the apogees of her mother’s and grandmother’s brands of abstract painting, is interested in abstraction’s postmodern potential, investigating “its nature by its parts.” Kahn favors structure, though with more license than her grandmother exhibited. In this context, its difficult to avoid seeing Kahn as somewhat a synthesis of her mother and grandmother, taking post-cubist structural cues from the former and painterly experimentation from the latter. She plays with her paintings’ depth, weaving angular and curvilinear planes of color and pattern into complex matrices. One senses, in her work alone, decorative art informing the candy-colored patchworks.

This is not the first show to explore the connections between these three artists. In 1996 the Hofstra University art gallery held a show of mother-and-daughter artists, which showcased the Masons. The family—which includes artists Wolf Kahn, Emily’s husband, and David Kapp, Cecily’s husband—has had its artwork shown together too, in a 1997 exhibition at The New Britain Museum of American Art. At Hunter, this remarkable show demonstrates by tracing the lineage of this maternal line of painters that abstract painting as an idea in our culture not only sustains enduring currency, but also retains remarkable elasticity.