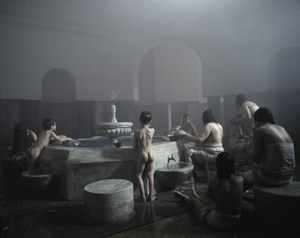 In her latest exhibition, Shirin Neshat continues her cinematic translation of Iranian writer Shahrnoush Parsipour’s Women Without Men. Her latest filmic installation lingers on a prostitute, named Zarin, in an Iranian brothel, a place saturated with color and languid characters that frame the protagonist’s psychological breakdown as she begins to see skin grown over the eyes and mouths of all the men she encounters. The metaphor is heavy-handed, but the elegance of Neshat’s visuals and storytelling make it enticing. The ten-minute film, Zarin (2005), is part of an unfinished full-length film based on Parsipour’s book about women’s lives after the 1953 CIA coup in Iran. Beginning in 2003, and on the invitation of the Sundance Institute’s Writing Workshop Lab, Neshat has been laboring to realize her first major narrative project.

The film was shot in Morocco, which seems to have offered the texture of a Muslim society without the distracting details of Iran. The result is a type of Middle Eastern Cuba, as her locale emits a timelessness that bridges centuries and, to a certain degree, cultures. Women in Neshat’s film seem particularly vulnerable, cloaked in saturated colors and set against sparse walls or blank street corridors. Zarin is portrayed as a self-hating Iranian Kate Moss with a deep-seated shame about her body. She is separated from those around her visually by her light skin and in the later scenes, her blue chador. Her fear is palpable, as is her indignity, though the source of both, we are left to assume, is her sex work.

As she has her first vision of the skin sheathed faces in the brothel, she dashes out in fear and ends up in a hamam (steam bath) where she loofahs her body until it bleeds and shocks a room full of women and young boys enjoying the communal space. Zarin’s isolation is beautifully conveyed cinematically: she is a lone figure framed by a large vaulted dome, clouds of steam, and fleshy bodies. In the end, and after speeding through the streets almost blindly, she stands in the arcade of a local mosque watching the men pray with eyeless and mouthless faces. At that moment, empathy for Zarin shifts from shame to confusion. We are left to stew with many unanswered questions and a bitter aftertaste.

If the film’s poetry saves the movie, the accompanying photographs are shallow and problematic, finding unfortunate shelter in orientalist imagery. While her earlier work plays with the images associated with orientalism (monolithic covered women, the rhythm of Arabic script, serious men at the verge of zealotry), the Zarin images evoke nineteenth-century Iranian—or Qajar—art, which is a rich artistic repository of Iran’s uneasy marriage with modernity. Gone is the experimental awkwardness of Qajar art; in its place is the soft porn of naked women and little boys in hamams or the ill-conceived portraits of crisply dressed figures against gray-washed walls partially adorned with geometric tiles.

The film’s rich velvety colors seem to gray in the photos. While the hamam scene in the film ignites the transition from a simple narrative into a meditative experience, the two-dimensional images become purely decorative and lose their narrative weight. The disjointed stony figures are male fantasies, including the little boy whose backside is suggestively turned to the spectator and, in Qajar art, is a surrogate for the predominantly male viewers and patrons. True, these images are made in 2005 and not 1805, but the lethargic figures with their childlike astonishment do more to cloak than illuminate.

The iconography is personal, but recognizably mined from Neshat’s childhood world. The strength of the work is its imaginative reexamination of issues tied into identity. Neshat’s earlier film Tooba (2002), shot in Mexico, is a metaphoric hunt for paradise. That project succeeded where Zarin fails by questioning the framing of the issues (native Mexican faces in lieu of West Asian, symbolic landscapes in place of the banal), forcing the viewer to re-orientate herself within Neshat’s visual language. The artist’s past, and its gestation in her imagination, is at the core of a conundrum: what or who is the true subject of her work? How much do we need to know about her past? Made the year after 9/11, Tooba expanded the debate from an Islamic-centric arena of ideas into a universal one. The Zarin photos are reactionary by contrast—the world she portrays looks idyllic and disrupted by Zarin’s shame—and when all the steam evaporates they leave little to reflect upon.

If Neshat’s work is known for its clarity, the photographs in this show and to a lesser degree the film, demonstrate a worrying sign that her focus and universal language may be fraying into a purely imagined world, infatuated with visceral emotions, and drawn to grandiose flourishes that flounder in an aesthetic that has temporarily, like Zarin, lost its way.

The guise of the archive is the best under which to first approach Frame’s body of work, especially his color photography from 1981. The photographs are snapshots in a way—quick and unframed—and yet, the small details and omissions reveal as much as they conceal, evidencing a close looking, documenting, and refocusing.