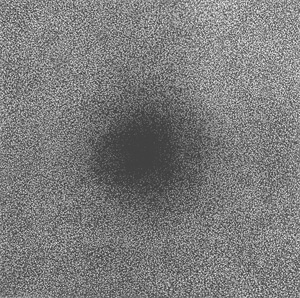 In 1951 Life magazine published a now well-known photograph of “The Irascibles,” 15 of the 18 painters who had signed a letter accusing the Met of rigging the jury for a national exhibition of American art. The guy on the far left of the picture (trying unsuccessfully to look as irascible as possible), one of the youngest artists in the group, is Richard Pousette-Dart. Nine of his first-rate paintings made between 1962 and 1976 comprise this show. Pousette-Dart was such an Irascible he didn’t think the group should be photographed for a popular magazine. Neither did Pollock or Clyfford Still (though as Irving Sandler points out, “They all showed up.”)

Ten years earlier, Pousette-Dart, then twenty-five, was the first to announce the new scale of American painting with his 90×120 inch “Symphony Number 1, the Transcendental.” It was a direct challenge to the painting of the time, and established the visual bandwidth that Pollock, Still, de Kooning, and most other American and European painters would soon adopt. It was not simply the size of this painting that was outstanding for its time (Léger had worked on big canvases since 1919, and Rivera was in New York in the thirties painting on moveable wall-sized panels), it was the sustained inward vision and aggressive frontal space, collisions of dark pigment, Jungian glyphs, and pictograms that he had created. The Americans were going to re-state the terms of painting.

The flamboyant Russian artist/theoretician John Graham was certainly an influence and source of encouragement to the artists, and they all knew Picasso was the guy they had to beat. Graham had written an essay, “Primitive Art and Picasso,” in 1937, illustrated with Inuit and North American West Coast Indian imagery. It encouraged a kind of panpsychic approach to art making; the idea that powerful imagery could arise as nature-abstract form language out of the primitive psychic stew of all cultures. As a Russian who had travelled to New York via Paris he was no doubt aware of the Russian experiments in Zaum, “behind-the-mind” painting and poetry, as well as of the Dada events in Paris, Berlin, and Zurich. Graham had a strong interest in anthropology and collected tribal art. Pictographs, hieroglyphs, and other spontaneous forms of communicative yet subjective picture making, quite different from the experiments of the Surrealists, soon entered the work of Pollock, Gottlieb, Rothko, and Newman.

Pousette-Dart’s work is best experienced physically. His ambition was singular: he hoped to experience transcendence through the act of painting and looking. The excitement of his work is that it meets your gaze and transforms it. You feel both eyes looking; your brain wakes up to the act of seeing. If you look as the painter would have, that is to say if you lock your eyes into the picture and then move your body slightly as if to pick up a little paint from the palette—the whole thing changes dramatically. You’re suddenly flying through the painting. It’s a weird experience that can be exhilarating in a way that few paintings give you. The work has been described as “pointillist” but that category is misleading. “Particle” might be better. Pousette-Dart was looking for a “natural” process of painting; his problem was to avoid aesthetics and achieve the “real.” He insisted on “presence,” and speaks in his notebooks of plateaus. It is evident that for Pousette-Dart a plateau was a painting or passage that for any knowledgeable viewer might seem finished, but that in his practice had simply achieved autonomy that, in his words, “went on- burst- increased- leapt forward.”

The paintings have great style, but are not characterized by gesture or formally elegant execution. The painter simply picks up paint with a brush or knife, and puts it down on the canvas surface in varying degrees of pressure, touch, and amount: creating an amazing variety of topographical figuration. “Amalfa” (1962) for example is not as heavily impastoed as it initially appears. It is a 72×96 inch painting. A six-foot square area on the left contains a great central spiral. The painting is made of every color imaginable, fused by Naples yellow and metallic gold into a Mediterranean bay. In “Presence #3 Black,” (1969) a ball of black energy as dense as a Giacometti eye floats and hovers in a wonderfully deep concave space, but you don’t get it unless you shift your habit of looking. “Meditation on the Drifting Stars” (1962-63) is a mind-blower: 95 &frac12; x 79 inches, the work pops out in a multitude of dimensions. “Presence; Light” (1974–81) has the same, perhaps even more extreme topographical variety. Pousette-Dart had worked for four years in a photo-retouch studio using a technique of dotting in tone to create photographic “reality.” He was an award-winning photographer himself. Mosaic is a word used in zoology to describe a visual picture made by an insect’s compound eye that is unified in its brain. Pousette-Dart’s paintings have a similar effect. It would be more accurate to describe his paintings as mosaic rather than pointillist, but there is a building up and finding process at work as well. He had learned in the re-touch studio how information gathered in the grain of a photograph translates in the brain into “reality”-recognition, but he also wanted his paint to have the physical “thereness” of stone and tesserae.

These paintings express the broad outlines of visual construction based on a crystalline lattice embracing both external and internal form. Pousette-Dart’s subject is a whole governed by the realization that painted light, color, photography, cinema, radio (Pousette-Dart was an amateur radio enthusiast), are simply aspects of electrical force, occupying different frequencies of a continuous field of energy. Mass affects this energy and vice-versa; and form is created in the interaction. His was a particular kind of alchemical intuition, a “bridge to the unknown within ourselves”; a kind of panpsychic trust in imagery that might arise in the binding together of paint particles, and those particles to a canvas surface.

Pousette-Dart lived his life in art, experienced life through his art, in ways that could be mistaken for religious or spiritual. I think he put this question to rest in an address he gave at Union Theological Seminary in 1952 on the relationship between religion and art: “Every work is potentially religious, but only becomes realized in itself and meaningful when it sufficiently burns its way through into its own reality. I believe in doing it yourself, and no intellectual premise can suffice to attain religion or art apart from the deep and actual coming to grips with one’s own work or one’s own soul.”

The exhibition currently on view at the New Bedford Whaling Museum is a once-in-a-generation opportunity to see a gathering of 25 pictures by Albert Pinkham Ryder and related works by modern and contemporary artists.