Heaven Has No Happy Ending 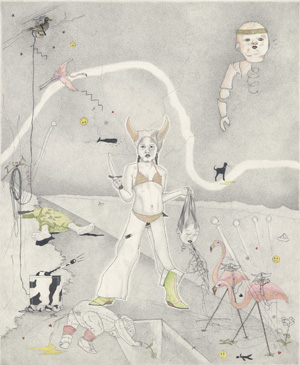 In her puff piece on Marcel Dzama in the Style column of The New York Times Magazine, Deborah Solomon writes that Dzama’s “lugubrious fairy-tale sensibility…exemplifies the latest drift in contemporary art. Call it cute tragedy or tragic cuteness: either way, it refers to the impulses of a post-Warhol generation that uses the popular art forms of childhood to express a startling array of adult feelings.” It would be simple, I suppose, to place Nils Karsten, a Brooklyn-based, German-born artist, alongside Dzama as another standard bearer of this freshly-minted, Times-sanctioned market niche. But I wasn’t reminded of Dzama while visiting Karsten’s recent solo show at Marvelli Gallery in Chelsea. I didn’t think of Henry Darger either—their common, uncommonly perverse predecessor—until encountering an echo of Darger’s practice of endowing male genitalia on prepubescent girls.

While there are obvious similarities among the three artists (violent and sexualized depictions of children, drawing as a primary medium, subterranean narratives, etc.), Karsten’s work—a raw jumble of stream-of-consciousness images—instead brings to mind the 1980s paintings of David Salle, of all people, as well as Harmony Korine’s much-reviled 1997 movie Gummo.

Karsten’s multileveled overlays of imagery recall Salle’s strategy of sowing the picture plane with jarring juxtapositions and clashing styles, and both artists seem to imbibe the waters of automatism—the wellspring of modern art from Surrealism to Abstract Expressionism that seeks to tap directly into the subconscious. But there is a crucial difference. While Salle’s facetious and facile free-associations rarely penetrate beyond the libidinal, Karsten dredges out running sewers of psychic pain. His mordantly disturbing drawings of children with facial and body hair, amputated and prosthetic limbs, and poles penetrating their naked bodies like scarecrows, are visual metaphors for the corruption of innocence by a hypersexualized and casually violent culture—a taboo subject that, if approached with unflinching honesty, necessarily crosses socially mandated lines of propriety, morality, and even legality. The underage frontal nudity displayed in a number of Karsten’s pictures, unlike Darger’s frankly sick fantasies, is explicit without a hint of prurience. The naked children address the viewer eye-to-eye with an air of impudent, Edenic unselfconsciousness that makes their premature sexualization by a debauched and twisted adult world, as signified by the freakish hair sprouting from their faces, legs and armpits, all the more poignant and heartrending.

The destruction of innocence may be a common theme in contemporary art, but Karsten goes further than most in portraying children as both victims and perpetrators—the inevitable endgame of unprotected kids seeking their own sources of physical and sexual power. War toys, slaughtered animals, crudely drawn knives, and decapitated heads are strewn across Karsten’s compositions amid a tumult of pictograms ranging from the playful to the mystifying to the downright vicious. In a culture that venerates childhood as a time of antiseptic enchantment even as it peddles gore-splattered video games to little boys and skimpy, skin-tight outfits to little girls, Karsten’s unapologetic truth telling delivers a substantial shock of recognition. Like the teenaged protagonists of Gummo, whose mindless sadism inflamed the bourgeois sensibilities of the Times (Janet Maslin’s review began with “October is early, but not too early to acknowledge Harmony Korine’s Gummo as the worst film of the year”), the children in Karsten’s pictures seem to have been polluted not only by the hands of adults, but also by their example.

Karsten puts over his profoundly pessimistic vision with a sophisticated visual vocabulary that combines lushly modeled classicism with cartoonish distortions, faux-naif doodlings, touches of iridescent storybook color, and pencil-point-breaking scribbles and slashes. Each pictorial element, arising from a roiling emotional core, serves to deepen and embellish the image’s overall mute testimony of abuse, rage, and abandonment, while building the silver-toned graphite surface into an unexpected, and sometimes unaccountable, jagged-edged beauty.

Would it be hopelessly middlebrow to interpret Karsten’s aesthetic transformation of trauma as some sort of redemption? Of course it would, and I’d conjecture that Karsten, who titled his show Heaven Has No Happy Ending after all, would agree. His worldview is far too grim, and his subject is far too messy and devastating, for the mockery of an easy uplift. As for the beauty of his work, that’s an artist’s job.

In much the same way her wall works create a relationship between humans and nature, her two-part publication, Littoral Drift + Ecotone, pushes the form of the book towards water, highlighting the surprising formal qualities these two mediums share.

They Oughta Name a Shoe After You

The Drift Back: Margaret Tait at 100

The films of Margaret Tait often portray a contradictory sense of time, one that seems suspended while also rushing or galloping forward. The effect, while hinting at philosophically grand ideas, also reflects the founding principles of cinema: moving images borne out ofsequential still frames. It's a phenomenon that Tait herself expressed wonder in. "It's mysterious, isn't it?"