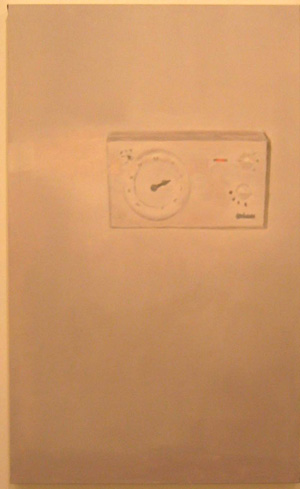 Luc Tuymans is one of the current darlings of the European art establishment, and has the resume to prove it. He’s been included in every major show from the Saatchi Gallery’s Triumph of Painting to Undiscovered Country at the Hammer Museum in L.A., with multiple appearances at Documenta, a one man exhibit at the Tate Modern, and favorable mention in Vitamin P, New Perspectives in Painting, Barry Schwabsky’s recent overview of emergent painters. I wanted to like this show.

That other super-star bad boy of Belgian art, Wim Delvoye, and his major sculpture installation exhibited here at the New Museum a couple of years ago, Cloaca, affectionately referred to as the “Shit Machine,” came to mind. This “machine,” which had its own chef cooking two meals a day for it, would pump and process ground up food through a series of beakers containing acid and enzymes, and in two days produce simulated turds that were signed and sold for $1,000 a pop. In that case, one had to admire the chutzpah and direct honesty of the enterprise. Perhaps not all together without merit, Tuymans is a bit more problematic, though there is still a hint of the toned down raw umber anal in some of these new paintings.

As Raphael Rubinstein postulated in “A Quiet Crisis,” we have a couple of generations now who, thanks to TV and computers, have lost their ability to “see” painting, to read the intricate forensics of the painters hand, eye, and mind. Add to this the postmodernist tendency to translate every object into a text, and you’re left with what is perhaps the most disappointing aspect, not only of Tuymans’ enterprise, but of so much current “art production.” “It is weak visual matter in an envelope of aggressive critical language,” as Harold Rosenberg defined a related problem regarding the paintings of Helen Frankenthaler. It’s rhetoric attempting to overpower the eye.

Having watched the development of Tuymans’ painting for some time, I was initially charmed by its clunky naïve distortions, bold handling, and rich surfaces. These latest examples seem both more facile and less substantial. Several critics adore this wane banality and the “dream-like” nature that combines the technique and the images. As for subject matter, defined in the press release as, the “image of a fragile America and a crumbling state of current affairs” seems at this point a bit tired indeed. If these depictions of table settings, bed canopies, wall mounted thermostats, and empty ballrooms can somehow be read a critiques of American foreign policy then Tuymans represents a contingent of “conceptual painting” wherein mimetic images are unmoored from the explicit meanings of their subjects, and there is a subversion of interpretation that elicits readings in whatever way deemed most relevant by the spectator.

Deconstructivism run-a-muck or aesthetics replaced by guilty political correctness? In short, the crux of the issue is the debate and polemics engendered by the supposed subject matter (however weak their rendition, or tangential their relationship), which is far more interesting than the paintings themselves. Yet I would gladly welcome the polemics if the decision was to make really “bad” paintings, vigorously bad, disgustingly bad, horrendously bad, and not just limply, bloodless but not very “good.”

The pictures do posses an odd physics that creates a visual vacuum, a kind of black hole that tends to suck the viewer’s mind in to try to fill the void. Admittedly, Tuymans has a light touch, is able to depict an image with minimal means and has an eye for provocative subjects. “Demolition” (2005) is a painting ranked by Jerry Saltz as “one of the best paintings Tuymans has ever made.” On first viewing, I was convinced it was a close up view of a serving of cauliflower au gratin. A tiny street light cowling in the lower left-hand corner led me to think that a miniature train accessory had somehow gotten mixed in with dinner, presenting a tragic potential for choking. The dangers of childhood death from choking, when viewed as a worldwide threat, dwarf even the dangers of terrorism and the fallout from 9/11. It could happen anywhere! Given the above-mentioned free-range elucidation of “conceptual painting,” one could therefore state this interpretation might be more “profound” than others, raising the “correctness quotient” of said painting.

Perhaps the most discomforting quality of these paintings is their drifting sense of ennui, a state where everything is of equal interest or disinterest, total moral and aesthetic stasis. If I had wanted to like these pictures, it would have been a misreading, as their essence seems to be an attempt to present the current state of a boring repellant societal banality. This state of intellectual indolence may be the fashion, or a malady of our cultural commissars. Whether out of laziness or conceptual subversion, this shifting of responsibility for the creation of content or meaning from artist to viewer seems like just the latest blow to the idea of the “heroic individual artist,” obviously an anachronism long overdue for extinction in our brave new art world. Yet I still long to really feel, to think some things still matter, that some things are still worth the grime and sweat of expressing in art. I refuse to surrender to the blasé, and therefore must state that my finds regarding these paintings to be decisively and unequivocally…inconclusive.