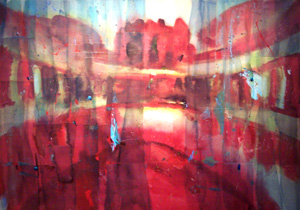 The relationship between painting and architecture through the years has been a fruitful one. In its adolescence, modern art embraced the mathematical regularity and geometric precision of suspension bridges and steel-frame skyscrapers for their formal and symbolic potential. Artists such as Joseph Stella and Albert Gleizes mined the modern metropolis for its store of angles and planes. Later in the century, Bauhaus pioneers such as László Moholy-Nagy went beyond the symbolic relationship, holding that the two disciplines were indivisible: painting was two-dimensional architecture, and architecture was three-dimensional painting. In recent years, however, this partnership has lost some of its original integrity. Architecture’s relationship to painting seems to have degenerated into of an intellectualized excuse to paint slick, abstract surfaces. Thankfully, for her suite of watercolor collages at Galeria Janet Kurnatowski, Judy Simonian left the masking tape and spray enamel in her utility closet.

The reliance on architecture in Simonian’s work is ready and immediate. But, unlike many of her contemporaries, Simonian avoids simply presenting cropped architectural snapshots, flattening them spatially, and using them as templates for generating hand-finished, graphic designs. The sites she depicts have palpable atmospheres. Beyond the severe geometry of the architectural grid, her sites have ground, sky, and light—all characteristics that suggest a personal relationship to place as well as to architecture.

The surface of “Red Coliseum” is constructed of regular vertical licks of mostly scarlet watercolor. The raw canvas looks wet and dense with pigment, like a more regulated Morris Louis “Veil” painting. The scene is foregrounded by gauzy paper strips that work as an effective window into deeper space. For all its touches and accents, the objective subject of the piece remains vague. Simonian’s loose brushwork generalizes specific objects, but universalizes space—the hulking coliseum that provides the painting’s title could be any coliseum, but the atmosphere surrounding it and the ground supporting it are redolent of something more specific.

It is worth mentioning that all but one of the paintings in the show is seen from a human-eye, face-on perspective, indicating, presumably, the crop of a 35mm camera viewfinder. We are privy as viewers to see each site the way Simonian saw it originally—matter-of-fact and unembellished. The lack of dramatic perspective and creative cropping invests her paintings with the familiarity of a vacation photo and an accompanying nostalgia that is unavoidable.

At 74×56 &frac12; inches, “DeepPurpleSpace” is the show’s largest piece. The title is somewhat of a misnomer, but the painting is a challenging spatial examination nonetheless. The purple space is shallow and thick. A latticed structure is sparely rendered with ropes of saturated violet watercolor and has the feel of a tool shed interior at noon in August. The network of purple ribbons provides an armature that peels in from outside and traces checkered yellow patterns on ground. Simonian’s shorthand environment is surprisingly convincing given the economy and looseness of her brushwork—with little objective information to draw on, one knows that the ground is dirt, the air is hot, and the walls of this weak structure are penetrable.

Simonian’s ability to envelop the viewer in her larger paintings is compromised only slightly as the scale lessens. “Blade Runner” and “Corporate Light,” both 17×21 inches, are less convincing in their description of actual architectural interiors. The strokes of watercolor in “Corporate Light” feel too regular on a smaller scale to transmit a tactile spatial reality, and “Blade Runner” has a shallowness and uniformity that come across as depicted rather than seen—although the recessed space described in the far left of the painting begins to work well.

While the larger pieces take the show, a set of small abstract watercolor sketches in a display case are surprisingly successful considering their low prominence in the exhibition. They raise issues about paint-as-structure versus paint-as-atmosphere, and they make their point with rich, saturated watercolor washes that are visually seductive.

Simonian’s paintings have a way of addressing ideas efficiently without being pedantic. Her odd mix of watercolor, collage, and architectural sources prove to be the perfect combination of media and content to broach such ideas. One doesn’t immediately look to watercolor to recreate structures that take shape from concrete and masonry. But, if a “building” is objective, the place it defines isn’t, and this truth is at the heart of Simonian’s work: she abstracts the concrete, reifies the intangible, and, in the process, has a way of making her places open to everyone.

Pathetic refracts the story of the lovesick queen onto multiple characters ranging from adolescence to adulthood, each negotiating spiritual and bodily appetites as well as the social costs of growing older in a female body. The play explores “society’s sick need to experience female desire as embarrassment,” as Ásta Bennie Hostetter, production designer and founding company member, puts it.

As curators Martino Stierli and Vladimir Kulić illustrate, in Tito’s Yugoslavia, architecture was not only viewed as a way to reconstruct a physically ravaged country, and promote Pan-Slavic identity; it was also believed to be capable of making the abstract idea of a better society tangible.