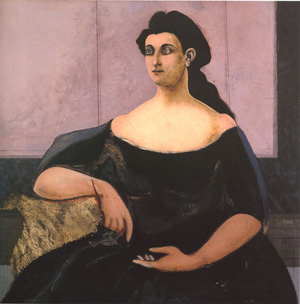 John Graham, born Ivan Gratianovich Dombrowski in Kiev, in 1887, stands as an avatar within the formative first half of the twentieth century in New York’s burgeoning art world. His biography reads at turns like Dr. Zhivago, Concerning the Spiritual in Art, and The Confessions of Aleister Crowley. He was trained as a lawyer, became a cavalry officer and ardent anti-Bolshevik, and fled Russia just ahead of the revolution. He landed in New York in 1920 and through his studies at the Art Students League made connections with artists who would become the foundations of the New York School. He was a connoisseur, a hustler, a pedagogue, a womanizer and, from the evidence of this enlightening show, an intriguing painter who embodied a startling divergent aesthetic. A beautifully illustrated catalogue with essay by Harry Rand accompanies this museum-grade exhibit, lovingly assembled by Alan Stone and gallery director Claudia Stone.

It is perhaps as a result of Graham’s fascinating biography with its many unexpected twists and turns that he has confused and confounded the institutional establishment, leaving him in a kind of critical no man’s land. He was an early convert, and zealously promoted modernism, particularly Picasso’s cubism. His efforts as a talent scout gave first exposure to Jackson Pollock, Willem de Kooning, Lee Krasner, and others. Through his associations with a broad swath of the downtown scene, he was able to introduce young artists like de Kooning to the reining masters Arshile Gorky and Stuart Davis. The ultimate renunciation of many of his own principles, which he chose to relinquish so as to complete his final and most unique series of paintings, seems too complex, too esoteric for the simpleminded marketing strategy that in our age requires.

As evidenced by recent exhibitions, many young artists seem fascinated by the idea of the “outsider” artist, like Henry Darger or Adolf Wolfli. An “academy of the naïve” ironically has appeared in the graduate art departments at several local universities. Graham, however, represents the other end of the “outsider” spectrum. He was an artist and intellectual who achieved this status not by holding himself apart from the art world in some hermetic isolation, but rather by approaching it directly, invading it to the very core, then once becoming the insider’s insider, being excreted, or intentionally progressing on to a position that was incomprehensible to those uninitiated in the strange alchemy of art.

The earliest pictures here show a clear debt to the cubist still lifes of Picasso and Braque, but with little of their subtlety. Graham does have an authentic color sense that overrides this seeming lack of compositional facility. Progressing rapidly to a state of late cubism combined with surrealistic fantasy, Graham begins to produce equestrian studies, perhaps in homage to his cavalry days and love of horses, but also in admiration of the Renaissance masters Paolo Uccello and Giotto. “Untitled” (1933), a pen and ink drawing of horse and rider, employs the heavy crosshatching and cubist planes that Gorky would adopt to such effective ends in works like “Nighttime, Enigma and Nostalgia” (1934).

Though a booster through his writing, curating, and socializing with the originators of Abstract Expressionism, Graham pulled back from the leap into total abstraction; but there are examples here of his mystical and metaphysical symbolism that approach it. “Metaphysical Study” (1942) is a small painting that melds ancient and invented Jungian symbols on a field of diagonal lines. It could be seen as a precursor of both stripe and pattern and decorative painting that became popular decades latter.

Sexual tension becomes more pronounced in the selection of erotic drawings presented in the back gallery and the Women series of portraits, and Graham makes his break with the prevalent trends in Modernism for which he proselytized so ardently. “Marya (Donna Ferita, Pensive Lady)” (1944) and “Two Sisters (Les Mamelles d’outres-mer)“ (1944) are pictures that alone should establish Graham as a protean force in American painting. At a time when the Ab Ex bandwagon was just getting rolling, these weird pictures with their classical subjects and handling must have seemed like the ultimate treachery to his fellow avant-gardists. On closer viewing these “classic” subjects reveal a disquieting uniqueness of vision. Though “original,” Graham’s women are composed from quotations or paraphrases of Renaissance masterpieces. Through a process of repeated tracing and the use of templates, the artist distilled the lines and forms to their essence. The accompanying drawings reveal the underlying proportional designs as well as strange symbolic, alchemical, and phallic notations. The presence of gashes on the throats and arms of the women have a sadistic sexual connotation, while the crossed-eyes and cockeyes allude to questions of sight versus perception.

These late figure studies provide a kind of guide for the postmodern practices of recent figurative painting. Artists as diverse as John Currin, Ion Birch, Tim Mensching, and Lisa Yuskavage owe much of their relevance and liberty to encode personal mythology into their images to the precedents set forth by Graham. It’s little wonder that forty years after his death, Graham is still under appreciated and misscategorized. He appears like the alpha and omega of Modernism. In a community founded on an agreed upon myth we call “art history,” Graham created his own, a kind of shaman warrior of art, questioning all accepted wisdom, always on the move, always on the attack. What greater threat to our comfortable complacency could there be?

This newly translated biography shares details that give a sense of who this self-inspecting artist was on and off the canvas. It studies the life of an artist who spent over seven decades obsessively studying herself.