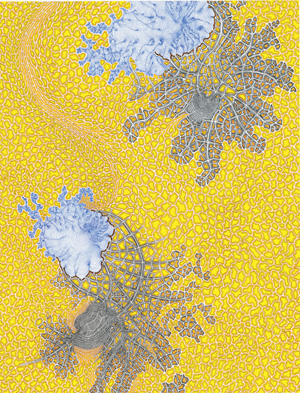 Daniel Zeller’s recent exhibition at Pierogi is similar to his last one two years ago. The gallery is filled with a number of fairly large framed abstract works on paper that are so meticulously drawn they look as if they could be photographs of the earth taken from a satellite. Each of these large detailed drawings invites the viewers to move as close as possible to the work until their nose is practically pressed against the paper. Once up close, each work on paper functions as a shortsighted Pollock painting, engulfing any sense of periphery and creating illusions of depth and dance in what is essentially a flat graphite-toned space. Zeller creates this illusion of depth by doubling, tripling, quadrupling his lines to make them run from end to end of the paper. They seem to move on their own, curving and zigzagging like a snaking river and then they dead end into a solid sea of neon yellow ink that sits in each composition like a great lake. The lines themselves repeat in formation, often giving a shaded elevation where elevation should not be, tempting the viewer to find the forms of bridges, parkways, fields and mountains peaks where there are none.

Zeller’s work is a combination of natural abstraction and formal abstraction. His lines flow in a lyrical unconscious way, but as each initial mark is made on the paper it sets the structure for the next mark to be made, essentially setting a guide for the work to be finished through. At times this manner of working can look a lot like gigantic obsessive doodles. Pierogi has a history of showing a number of artists who work from this strategy like Steven Charles and most notably James Siena. Zeller keeps his distance from these other painters by edging his abstraction toward the representational. In some instances he creates the ideal of a satellite map and in others he portrays pure abstraction. Like Terry Winters, Zeller is creating a window for the viewer to negotiate and realize the subtle or not so subtle difference between abstract idealism and the everyday image. Though unlike Winters’s robust painterly application of his landmark biomorphic cell structures, which are capable of great changes in their mutations; Zeller’s graphic sensibility, which is meticulous and minute, gravitates towards a slow and repetitive construction of topographic images.

These recent drawings might be the most cunning abstract works to be shown this year, yet they do not evoke power or excitement. Abstract painting seems to have fallen into an innovation rut and is now in a mannerist phase. Those who are still practicing this ancient modernism employ painting and drawing maneuvers like that of skate boarders turning tricks: hitting a Pollock, de Kooning, Winters, or Dunham move with ease. Zeller is not exempt from this. He has made what you expect to see. He never challenges even his own formal redundancies, let alone those of other painters. His language, if not the language of abstract painting, has not moved forward for some time and feels too safe, perhaps scared of fiddling with its own success.