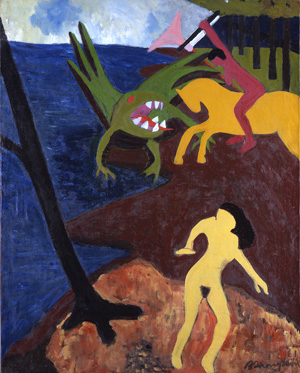 That’s what it’s all about finally—symbolism with paint. That’s why painters make paintings. Humans can perceive content in form and meaning in the structured presentation of the world’s assembled colors. When we use our bodies and the medium of paint to create an image of our inner struggles, the body is inscribed in the image. It is this that gives painting its unique communicative power. It is grounded in our shared experience of living in a body. In the visual and physical expression of paint, we make these things known to others and to ourselves. Bob Thompson’s paintings, symbolic expressions of his inner world, are among the finest such models.

Figures like Thompson are endlessly compelling; lights consumed by the energy of their own burning. Bob Thompson was a heroin addict. By the time he was in his mid-twenties, he was fully in the grip of this most addictive drug. He was dead by twenty-eight. Furiously churning out paintings, he was socially savvy enough to procure sufficient art world funds to support both habits. Thompson must have deemed it necessary to flirt with madness in his life in order to achieve the heights he knew in his painting. This intensity has led some to identify his work as naive. But this is inaccurate; he went to art school and studied the old masters incessantly. His artistic gift, made all the more extraordinary by the intensive training he undertook, was the mainline he had to his unconscious. Despite emulating old master compositions into his own work, Thompson never lost his personal touch in bringing to light images drawn from his dreams and nightmares. The vitality of his painting, like the hedonism of his life, is like a
blood letting excising the artist’s demons. He knew full well that the life he led might do him in prematurely. He just went on with it anyway.

This show lays out the trajectory of Thomson’s career. It is correctly described as meteoric. There is work from 1959—the year the artist withdrew from university to pursue his career independently—up through 1965, the year before his death. I prefer the smaller pieces in which Thompson’s roiling brushwork, contained by the small scale, creates glowing contrasts and happy accidents that pulse with life. But he could work on a large scale too. In paintings like “Tribute to the American Indian” and “The Golden Ass,” Thompson activates New York School swaths of canvas with rapid brushwork, hatching and scribbling his way to the next form. The compositions of these pieces often find a vortex in a portion of the image on which the painter has chosen to focus—a headdress in the former and in the latter the bared buttocks of a bent woman.

“The Golden Ass” equates sensuality with sexuality, an enduring fixation for Thompson. His paintings look like sex and the similitude seems entirely natural. The loosely painted, interlocking planes of color on which Thompson settled for his mature style seem always in the process of merging. This, coupled with the acts of sexuality that Thomson habitually committed to canvas, makes the artist’s philosophy clear. Cartesian opposition of mind and body is antithetical to him. We live in our flesh, his paintings tell us. We know the world through our bodies and we perpetuate perception through procreation.

But the body can be as much cage as conduit. In such cases just subsisting, even if only for the term of a given body, is a struggle. “St. George and the Dragon” was a favorite motif of Thompson’s. In the example on display at Michael Rosenfeld, a black tree sways before a purple-mouthed green dragon that vies with a mauve, pink-axed rider aboard a yellow steed. The ocean is a cobalt blue beneath a cerulean sky and I’ve only begun to describe the variety of color. It’s a painter’s dream to be so inspired by color and use it so adeptly for symbolic ends.

A Solid Image, A Sunlit Path

In uncertain times, it helps if one can count on some solidity. A photograph I have looked at a few times in the last months comes to mind as an image of solidity, and also of invitation.

An anthology of six hybrid works that approaches translation as an act that occurs not only between languages but also between media and disciplines. Through this dual lens, fourteen contributors on four continents examine timely and thorny questions about the limitations of witness and testimony.