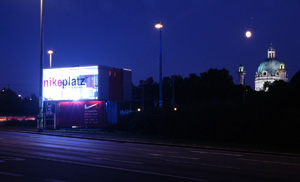 Plato famously banned poets and by extension all artists from his Republic because, among other things, they are at third remove from the truth and they lie. However, we live in an era (and perhaps all eras are alike in this way) in which our government lies to us using simple answers waged to defend current policies. (That is, the political answers alluded to by Bush when he said “I don’t do nuance.”) If It’s Too Bad To Be True, It Could Be DISINFORMATION offers a heaping of misdirection and nuance without falling into the usual trap of political art: boring and didactic truisms not qualifying as art.

Curated by Mercedes Vicente the show includes work by Paul Chan, Marcelo Expósito, neuroTransmitter, Martha Rosler, The Speculative Archive / Julia Meltzer and David Thorne, The Yes Men, 0100101110101101.ORG (Eva and Franco Mattes). In her curator’s statement Vicente writes, “Exploring the complicated relationship between mass media and global corporate culture, this exhibition brings together artists, activists, grassroots media, and hacker collectives that have emerged to bring awareness and transparency to the control of information flow.” The artworks in If It’s Too Bad To Be True…; are obviously intended to promote rather than prevent thinking about difficult issues and they succeed to a startling degree.

The most powerful and effective pieces used more than one media to explore political issues through artistic intervention. For instance, Martha Rosler’s 1985 piece “If It’s Too Bad To Be True, It Could Be DISINFORMATION” (from which the title of the show is taken) uses spliced video, newspaper articles in which certain paragraphs and ideas have been underlined and bracketed, and politically charged quotations to investigate the concept of disinformation and more specifically, disinformation as used in the United States’ involvement in the Nicaraguan Civil War. (Rosler’s famous Bringing the War Home series of photomontages (in which images of the Vietnam War are inserted into luxurious scenes of the American middle class) can be seen nearby as part of the Persistent Vestiges: Drawing from the American-Vietnam War show at The Drawing Center.)

Many of the artworks using multiple media employ the artistic prank, or intervention, as their primary tactic. Sarah Kanouse writes in “Cooing over the Golden Phallus,” from the Journal of Aesthetics and Protest, “The prank’s re-emergence on the stage of popular media promises renewed opportunities to hijack the spectacle, possibly for the sake of inserting alternate meanings, possibly just for the hijack itself.” And it is certainly a sign of these strange times that a reality-based movement might have to begin with obfuscation. The pieces by neuroTransmitter, The Yes Men, and 0100101110101101.ORG (Eva and Franco Mattes) directly intervene in political, economic, and civil society. It is interesting that the collective nature of these groups might inspire an interventionist aesthetic. All of these groups use tactical media to problematize the relationship between the media and political machinations.

NeuroTransmitter’s “Frequency Allocations (in 3 parts)” investigates the FCC’s control of the airwaves. It does this with a video, a poster, and a handout. The video consists of the history of FCC regulation and airwave allocation alongside activists protesting media consolidation. Rolling in front of these scenes are outrageous lists of media ownership. A U.S. government poster lists “U.S. Frequency Allocations” which shock the viewer using vibrant colors. NeuroTransmitter’s handout offers hope. It turns up the colors of the government’s poster and uses them as the backdrop for an image of an activist broadcasting outside federally established limitations for radio.

In the Yes Men’s “Dow Chemical Identity Correction, BBC World Service”the group undertakes an act of Identity Correction, which is when “honest people impersonate big-time criminals in order to publicly humiliate them. Targets are leaders and big corporations who put profits ahead of everything else.” In the Dow piece members of the group copy and transgressively alter Dow’s website (which damaged the value of Dow’s stock) and impersonate Dow Chemical officials. In their three-channel video the Dow “spokesman” accepts responsibility for the tragic gas-leak in Bhopal in 1984 and vows to liquidate Union Carbide to compensate victims of the incident.

Eva and Franco Mattes, who form the collective 0100101110101101.ORG, created the provocative nikeground.com website. In September 2003, they facetiously announced, through a plagiarized version of Nike’s website, that Karlsplatz, one of Vienna’s main squares, was about to be renamed “Nikeplatz.” Nike eventually took legal action against the group, but surprisingly 0100101110101101.ORG won the trial. Through the website they have received thousands of emails from people who believe the site to be Nike’s actual site. For this show the couple responded to several of these emails and present the Nikeplatz project.

Art is rarely instrumental to any political cause. What it offers is possibility. Possibility must always be seen as positive, because it implies that a future is possible. Art opens up concepts while politics attempts to close them. All of the pieces in If It’s Too Bad To Be True, It Could Be DISINFORMATION open and engage concepts in order to thwart our preconceived positions and ultimately to help us see the complex political situation before us.