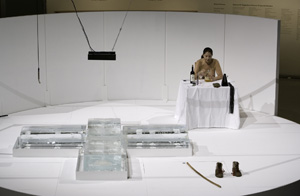 Performa 05, the first biennial ever of “new visual art performance,” that ambiguous yet agreed-upon term encompassing spoken word, theater, film, video, computer art, photography, music, sound, travel, and lectures, stormed across the alleyways, byways, hallways, and city streets of Manhattan, Brooklyn, and Governor’s Island, revitalizing the tattered memories and hearts of that even more ambiguous thing referred to as “downtown.”

Performance art, the bastard-but-much-adored stepchild of the avant world, finally got some respect thanks to the Herculean efforts of RoseLee Goldberg, its champion and muse. With over 90 artists at 20 locations, the festival spanned three weeks with multiple events often stacked on the same night. The locus point was "Seven Easy Pieces" by Marina Abramovic, a series of old and new pieces at the Guggenheim Museum. Making a pilgrimage on different nights via the Lexington Avenue line to the shrine of Santa Maria included paying homage to both her and her recreations of such Golden Oldies as Bruce Nauman’s slamming “Body Pressure Yellow Body,” Vito Acconci’s masturbatory “Seedbed,” Valie Export’s “Action Pant: Genital Panic” (which Marina performed in crotchless pants, cradling an AK-47 in her lap), Gina Pane’s incendiary “The Conditioning,” Joseph Beuys’s “How to Explain Pictures to a Dead Hare,” and the riveting “Lips of Thomas.” Completely nude, Marina licked honey out of a jar with a huge silver spoon, drank red wine out of a crystal glass, and sliced a pentagram in her stomach with a flat razor blade. Violently whipping herself with a black leather cat-o-nine tails, she raised huge red welts across her body then lay prone on a cross of ice blocks resembling Andreas Mantegna’s “Dead Christ” while a space heater hovered over her stomach, causing the bloody pentagram to ooze. Rising like Lazarus, she stepped into army boots, placed a jaunty woolen army cap on her head, and held aloft a blood-streaked white flag of surrender. Then she started the whole sequence again, and did so for 7 hours straight. She said, “I do not want the public to feel that they are spending time with the performances, I simply want them to forget about time.” Glancing around the Guggenheim at her hushed acolytes, it was clear she had succeeded.

RoseLee laid out her agenda for Performa 05 at “Not For Sale,” a panel stocked with such heavyweights as critics John Rockwell, Margo Jefferson, and Linda Yablonsky (an earlier panel included representatives from the Tate Modern and Walker Art Center as well as Katy Siegel). She pronounced, “Performance is important in the history of 20th century art and not a side show.” Much of the radical work made by artists in most art movements was made in live mode, and though this genre does not yet have its own language and context, it still needs to be taken seriously. Performance, because it is so ephemeral, has a hard time leaving a legacy and must be written about, photographed, and filmed. Yet many artists, she felt, were still dismissive of the genre, displaying an attitude of: “If you weren’t there it doesn’t matter,” to which she quipped, “Well, you weren’t at the Battle of Waterloo either and that mattered.”

The festival kicked off with a commissioned performance “True Love is Yet To Come” by Jesper Just at the Stephen Weiss Studio with a savvy state-of-the-art high tech hologram created with the Musion Eyeliner “goggle-free 3D” program. Using mirrors and refracted light on an ultra thin foil, it let us just pine away as he hung his evanescent love object before our very eyes instead of only in his broken, sentimental heart. In fact, from the samples I saw, during this entire festival a sub-theme of raw emotional vulnerability and longing mixed with a pastiche of nostalgia and homage to the past emerged. Since Performa 05 was putting its critical stake on the map, it is natural that many of the pieces were reenactments and homages to those who came before.

This was apparent with the gender-bending Dead Jack Theater piece, “Jack Smith And The Destruction Of Atlantis,” co-curated by Mary Jordan and Ross Morgan in a raw 5000 square foot loft on Mott Street, an homage to a time when actual downtown loft space existed in New York City. A host of sexy, exotic Flaming Creatures lounged around, biting the bemused audience’s ears, whispering sweet nothings, flicking long peacock feathers, and entertaining themselves in front of ornate mirrors or rolling on lavish beds and sofas rubbing against one another suggestively. Film clips of the original and legally banned Flaming Creatures stylistically posing, hints of their legendary orgies and nudity projected on the walls. Lacking the Patchouli oil, sandalwood incense, and mind bending drugs, it lapsed into a wistful memory of a 60s be-in, another theme that sprang up in Performa. In an over-mediated society there emerged a plea, even when high-end technology was amply evident, for a time before cell phones, digital, and wireless. The true tribal value of a downtown community has vanished and so has its coherent center. Most of us are independent units belonging to any number of tribes and the live, time-based necessity of performance art restores that coherence, albeit temporarily.

Williamsburg jumped into the fray by sponsoring a number of events spread between Dam, Stuhltrager, Jack the Pelican, Parker’s Box, Momenta, NURTURE, and Galeria Galou and Goliath. “Shoot,” a presentation of 15 short films curated by Jessica Lauretti at Dam, Stuhltrager, had three particularly interesting selections. “Residence” by Andrew Demirjian, with a TV screen sliced into the four quadrants: What I’m doing (eating doughnuts), What I ought to be doing (eating veggies), What I want to be doing (puking), and What’s outside my window (an endless parade of SUV’s)—a visualization of one’s endless internal chatter. “Where’s My Boyfriend” by Gretchen Hogue used montage and cheesy 70s porn footage as a young woman looked for her boyfriend, boiling lust down to the species drive to reproduce itself. Finally, there was “S.P. I. C. – The Storyboard of My Life” by Robert Castillo, currently nominated for this year’s Academy Award for Best Short, about the artist’s life, illustrated by his drawing real-time storyboards with poignant voiceovers. This festival showcased work whose average attention span per cut averaged eight seconds, illustrating a generation juggling multi-tasking, multi-media, multi-culti, multi-lingual, and multi-sexual issues.

At Eyebeam, Christian Marclay premiered “Screen Play,” a video score interpreted in three different musical sessions by Tot Trio, Elliott Sharp, and Zeena Parkins. The dreamlike images of shipwrecks and crashing waves mixed split screens of ballerinas and grinding gears with occasional computer generated red dots or green wipes overlaying the visual field. The combination of images and sound resembled a Burroughs cut-up and hearkened back to the time of pre-talkies when the musicians’ interpretative powers set the tone for associative storyline.

Participant, Inc., brought performance back to the truly personal. A blindfolded Julie Tolentino danced cheek-to-cheek with a series of volunteer audience partners in “A True Story About Two People.” Standing inside a mirrored cube carpeted with live green grass, she hugged and whispered to people she touched but could not see. Also at Participant the poet Eileen Myles curated an excerpt from the opera “The Judas Cradle” starring Ron Athey and Juliana Snapper. The always controversial Athey emerged bald, tattooed, cosseted and in glowing health. Snapper wore a long skirt and bustier so tight her cups runneth over. Wailing at one another in a compelling, Italian-sounding language, they traversed experimental vocal territories previously claimed by Meredith Monk and Diamanda Galas. At one point their syncopation sounded like dual jet engines revving up for the Orchestra of Hades. As Athey un-gusseted his corset, Snapper preened, arched and squalled like a cat in heat. He donned chicken wire sculpted breasts, lubing them up with fistfuls of Crisco shortening. He then slid 20 feet forward, face down on the floor, schmutzing Crisco in a crisscross pattern between dual rows of the awed audience’s toes as Snapper screeched to her ornery climax. She walked over and placed a red dunce cap like that worn by Abu Grhaib torture victims on Athey’s head before they finally embraced. Since this was only a snippet, I can’t wait for the full opera to premier to interpret the layers of meaning ricocheting throughout, though I doubt BAM will hot list it anytime soon.

And finally, more longing, lust, and love abounded at The Slipper Room, with a provocative dry hump striptease, “Rehearsal II” by Francis Alÿs. Each time professional stripper Bella Yao seductively and expertly took it off, her accompanists, the soprano Viktoria Kurbatskaya and pianist Alexander Rovang, niggled endlessly over the minutest details of their presentation. Pouting, Bella re-dressed and once they settled their score, began her tease all over again. And again. And again, since they kept endlessly debating. The audience’s anticipation turned into frustration, irritation, boredom, and so it brilliantly went. The performance raised a host of questions like: Is it ok for hardcore downtown viewers to like prurient, titillating entertainment? Do you have to have a great bod and take it all off to get ahead in the art world? Is the same old sexualized art hierarchy still necessary to get hung well in a decent museum?

Since the first Performa Biennial in 2005 New York City has always been the star of the show. We dedicated all our efforts to commissioning and supporting artists to create startling new work for the new century, and to collaborating with curators in cultural venues up, down, and across Manhattan, and boroughs beyond, with the firm intention of putting a spotlight on the city as the performance capital of the world.